NFL players kneel, raise fists or sit out National Anthem as they kick off slate of preseason games 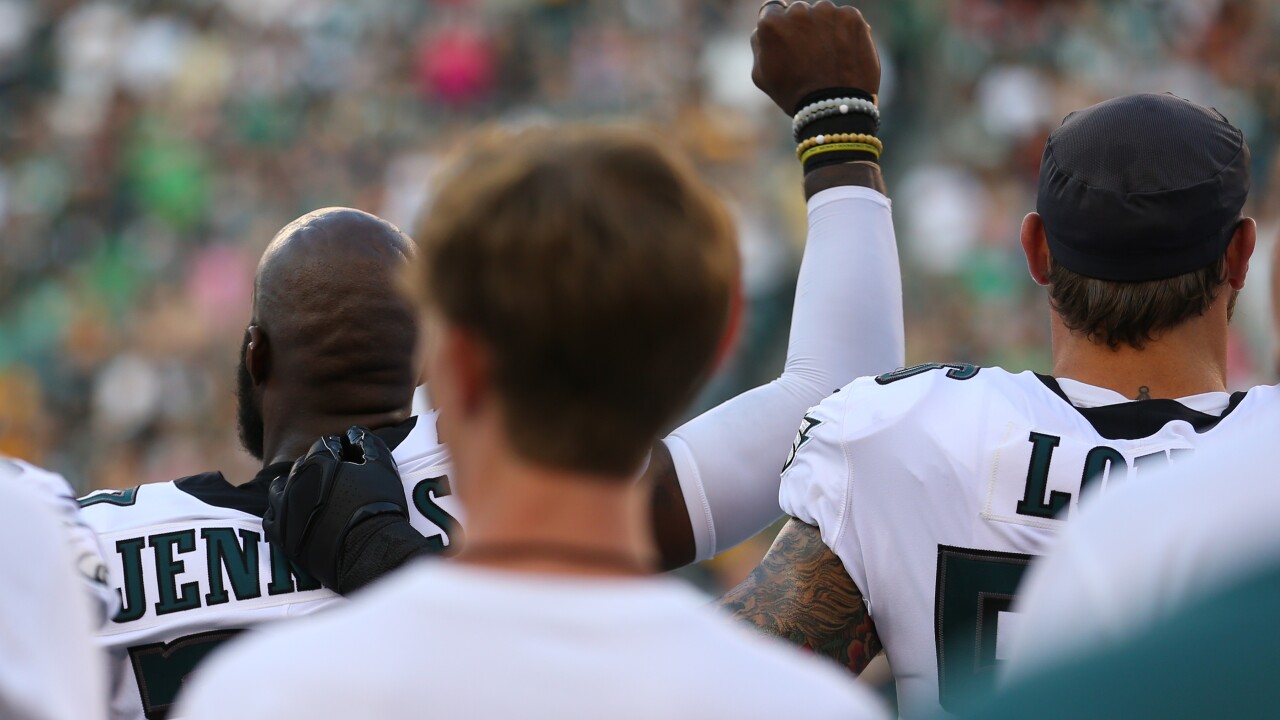 PHILADELPHIA, PA – AUGUST 09: Malcolm Jenkins #27 of the Philadelphia Eagles raises his fist during the national anthem as Chris Long #56 puts his arm around him prior to the preseason game against the Pittsburgh Steelers at Lincoln Financial Field on August 9, 2018 in Philadelphia, Pennsylvania. The Steelers defeated the Eagles 31-14. (Photo by Mitchell Leff/Getty Images)

PHILADELPHIA, PA – AUGUST 09: Malcolm Jenkins #27 of the Philadelphia Eagles raises his fist during the national anthem as Chris Long #56 puts his arm around him prior to the preseason game against the Pittsburgh Steelers at Lincoln Financial Field on August 9, 2018 in Philadelphia, Pennsylvania. The Steelers defeated the Eagles 31-14. (Photo by Mitchell Leff/Getty Images)

The first full slate of preseason games kicked off Thursday night, bringing NFL players back into the field for more football and more protests.

Several players took a knee, raised fists or did not take to the field while the National Anthem was played before a dozen preseason games began across the country.

The Miami Herald reported that Dolphins wide receiver Kenny Stills, along with wide receiver Albert Wilson, knelt during the anthem before a home game against Tampa Bay.

The Philadelphia Daily News reported that Eagles defensive end Michael Bennett walked out of the tunnel during the playing of the anthem and headed to the team bench. The Daily News said Eagles captain Malcolm Jenkins and cornerback De’Vante Bausby raised their fists.

Several Jacksonville Jaguars players were not on the field for the playing of the anthem before their preseason game against the New Orleans Saints, according to The Florida Times Union. The players included Jalen Ramsey, Telvin Smith, Leonard Fournette and T.J. Yeldon.

During the NFL Network’s television coverage of the Cleveland Browns and New York Giants game, 10 Giants were seen kneeling in unison in an end zone before the National Anthem was played.

A dozen games were played Thursday night but it was not immediately clear how many saw signs of protest.

The NFL has said it won’t punish the players who took part in the protests on Thursday, reiterating the league’s decision to shelve its new policy regarding conduct surrounding the anthem until it reaches an agreement with the NFL Players Association.

The league noted that while players won’t be disciplined, it expects all players on the field to stand during the presentation of the flag and the anthem.

“Personnel who do not wish to do so can choose to remain in the locker room,” the league added.

The anthem controversy has been rumbling since 2016, when then-San Francisco 49ers quarterback Colin Kaepernick knelt during the anthem to draw attention to racial injustice.

The debate ratcheted up a notch in 2017 when US President Donald Trump said kneeling players showed “total disrespect for our great country.”

After withstanding two seasons of backlash against players kneeling, raising fists and displaying other means of protest during the anthem, the NFL said it would fine teams with protesting players directly, who in turn would have it in their discretion to enforce pregame anthem observations in their own ways.

After confusion, the NFL decided to take its new policy back to the drawing board and consult with the players association.

“The NFL and NFLPA, through recent discussions, have been working on a resolution to the anthem issue,” read the joint statement. “In order to allow this constructive dialogue to continue, we have come to a standstill agreement on the NFLPA’s grievance and on the NFL’s anthem policy.”