KITTY HAWK, N.C. – Two men led Kitty Hawk, Currituck and NC Highway Patrol on a chase after the suspects were seen fleeing a Walmart with more than $1,000 in stolen merchandise.

The suspects, Calvin Alston and Luis Cruz of Edenton, loaded up two suitcases with merchandise, including a 50-inch television.

The chase began in Kitty Hawk and ended in a bean field around the 4300 block of Caratoke Highway in Coinjock.

Both men have been charged with felony larceny, larceny from merchant, RDO, felony speeding to elude and careless and reckless driving.

Alston was driving on a revoked license during the chase and is also wanted in Chowan, Bertie, Gates and Pasquotank counties for larceny. 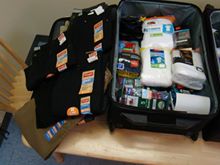