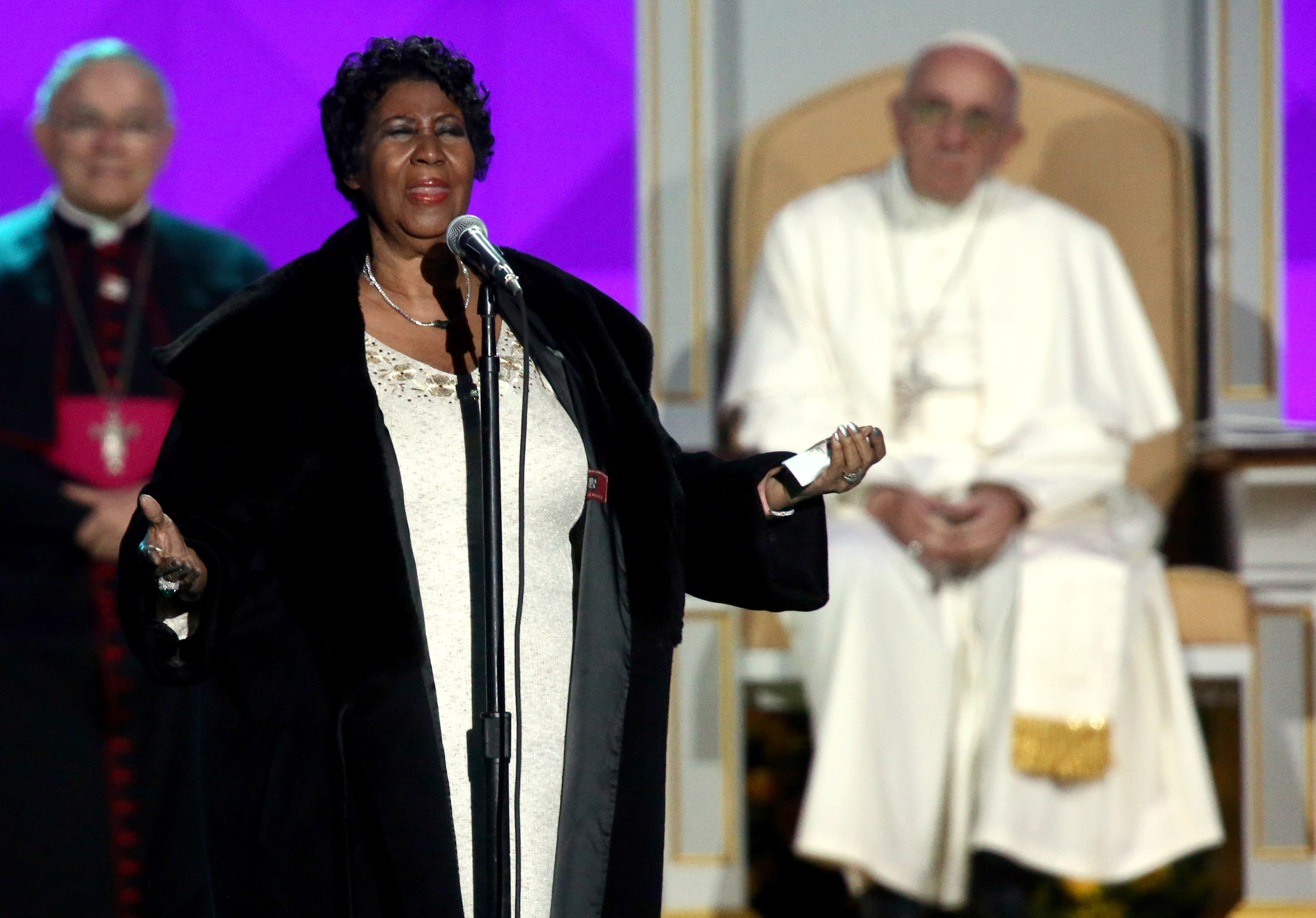 Aretha Franklin, whose gospel-rooted singing and bluesy yet expansive delivery earned her the title “the Queen of Soul,” has died, a source close to the family said Thursday. She was 76.

Franklin died at her home surrounded by family and friends, the source said.

Her death comes three days after a source close to Franklin told CNN’s Don Lemon that the singer was in hospice care.

Franklin had been reported to be in failing health for years and appeared frail in recent photos, but she kept her struggles private.

In February 2017, Franklin announced she would stop touring, but she continued to book concerts. Earlier this year, she canceled a pair of performances, including at the New Orleans Jazz Fest, on doctor’s orders, according to Rolling Stone.

The singer’s final public performance was last November, when she sang at an Elton John AIDS Foundation gala in New York.

Over the course of a professional career that spanned more than half a century, Franklin’s songs not only topped the charts but became part of the vernacular.

She made “Respect,” written by Otis Redding, a call to arms. “(You Make Me Feel Like) A Natural Woman,” a Carole King song, was an earthy expression of sexuality. “Think,” which she wrote with her then-husband, Ted White, became a rallying cry for women fed up with loutish men.

The first woman admitted into the Rock and Roll Hall of Fame, she had 88 Billboard chart hits during the rock era, tops among female vocalists. At the peak of her career — from 1967 to 1975 — she had more than two dozen Top 40 hits.

“Aretha Franklin is not only the definitive female soul singer of the Sixties,” according to her Rolling Stone biography, “she’s also one of the most influential and important voices in pop history.”

She won 18 Grammy awards, including the honor for best female R&B performance for eight straight years.

There was nothing run-of-the-mill about a Franklin performance. “I Never Loved a Man (the Way I Love You)” is slinky and gritty, Franklin’s voice sometimes a whisper over Spooner Oldham’s electric piano.

“The House That Jack Built” fairly crackles: “I got the house / I got the car / I got the rug / And I got the rack / But I ain’t got Jack,” Franklin belts.

In Franklin’s delivery, “Eleanor Rigby” was a figure of defiance; with Franklin’s voice, “Bridge Over Troubled Water” went places not even Art Garfunkel, whose angelic tenor dominated Simon & Garfunkel’s original version, could take it.

Her soul was as deep as her voice was strong.

“I think of Aretha as ‘Our Lady of Mysterious Sorrows,'” wrote the late Jerry Wexler, Franklin’s producer at Atlantic Records. “Her eyes are incredible, luminous eyes covering inexplicable pain. Her depressions could be as deep as the dark sea. I don’t pretend to know the sources of her anguish, but anguish surrounds Aretha as surely as the glory of her musical aura.”

A recording career at 14

Perhaps more than any other soul star, Franklin’s voice embodied the music’s debt to gospel.

She was born in Memphis, Tennessee, in 1942, but was raised mostly in Detroit, where her father, C.L. Franklin, was a prominent minister and a nationally known gospel singer. Franklin sang in the choir of her father’s church and, though she declined her dad’s offer of piano lessons and taught herself instead, began recording gospel music at age 14.

She toured the gospel circuit with her father, befriending stars such as Mahalia Jackson and Sam Cooke. She later performed at Jackson’s funeral.

She was signed to Columbia Records in 1960 by John Hammond, the eagle-eyed talent scout who also discovered Billie Holiday, Bob Dylan and Bruce Springsteen, but she had only limited success at the label. It wasn’t until her arrival at Atlantic Records in the decade’s second half that she gave up trying to become a polished all-purpose entertainer for a career as a soul and R&B singer, backed by an earthy rhythm section from Muscle Shoals, Alabama.

“The backup musicians provided a much grittier, soulful and R&B-based accompaniment for Aretha’s voice,” according to the All Music Guide, “which soared with a passion and intensity suggesting a spirit that had been allowed to fly loose for the first time.”

“It had looked for the longest time like I would never have a gold record,” she told Time magazine in 1968. “I wanted one so bad.”

Songs like “Respect” were not only huge sellers, they were also adopted by African-Americans and feminists as anthems for social change. After Martin Luther King, Jr. was assassinated, Franklin sang at his funeral.

The hits kept coming throughout the early 1970s, including “Spanish Harlem” and “Bridge Over Troubled Water.”

By the late ’70s, Franklin’s star power began to wane, as the golden age of soul ended and as critics and fans became less enthusiastic about her continuing output. However, she re-emerged in the 1980s, releasing the 1985 album “Who’s Zoomin’ Who?”, which spawned the hit “Freeway of Love.”

She also collaborated with the Eurythmics on “Sisters Are Doin’ It for Themselves” and British pop star George Michael on the smash duet, “I Knew You Were Waiting (for Me).” The latter hit No. 1, her last chart-topper.

“Don’t say Aretha is making a comeback,” she said at the time. “Who’s Zoomin’ Who” was released, she said, “because I’ve never been away.”

Franklin’s reportedly tumultuous personal life, meanwhile — she was twice divorced and had brushes with the law — was shrouded in secrecy.

She was the mother of four sons — she gave birth to the first at 15 and the second at 17, according to a 1995 Ebony magazine profile. The article depicted her as a warm, down-to-earth woman with a crackling sense of humor, who answered the door in bare feet and confided her diet secret was a combination of Slim-Fast and younger men. She also was reportedly an accomplished cook, telling Ebony, “I can wear some chitlins out.”

The Ebony profile suggested the source of some of that pain might have been Franklin’s growing up largely without a mother — Barbara Franklin left the family in 1948, when Franklin was 6, and died four years later — or the anguish of losing her father.

C.L. Franklin was shot in his home by burglars in 1979 and lived for five years in a semi-coma before dying, the magazine said. Asked the toughest decision she ever had to make, Franklin told Ebony, “It was when my dad was in the hospital,” and began to cry.

She was also the godmother of Whitney Houston, who died in 2012.

But Franklin’s lows and the emotion involved fueled her music. She saw a number of resurgences in the past three decades and her image as a pop icon endured, with President Barack Obama featuring her singing “My Country ‘Tis of Thee” at his inauguration in 2009. She also performed at President Bill Clinton’s inauguration in 1992.

Franklin was awarded the Presidential Medal of Freedom by President George W. Bush in 2005. In 1986, her voice was declared a national resource by the Michigan Legislature. She even had an asteroid named for her.

“She looks rested and relaxed, like a housewife headed out to do some shopping at the local K-Mart,” Ebony reporter Laura Randolph wrote in the 1995 profile. “There, or at the Woolworth’s Five and Dime where, she recalls, she’s spent many an afternoon ‘browsing and buying knick-knacks’ then ‘sitting down at the counter to a scrumptious turkey and dressing plate with mashed potatoes oozing with gravy and loving it.’ ”

In August 2010, she canceled two free concerts in New York because of “fractured ribs and pain in the abdomen,” spokeswoman Gwendolyn Quinn said, adding that Franklin’s doctors had told her to come in for tests immediately.

That November, her doctors ordered her to cancel all personal appearances for the next six months, the Detroit Free Press reported. In early December, Franklin underwent surgery deemed “highly successful.”

She also canceled some appearances in 2013.

However, she recovered enough to return to touring in 2014, including a performance at New York’s Radio City Music Hall. She’d also lost almost 100 pounds.

“It’s fun buying new clothes!” she told USA Today. “I couldn’t stay out of the mirror, just turning every way. This is my natural weight.”

As for her old wardrobe? The shopper knew exactly what to do with those outfits.

“I’m thinking of giving them to a resale shop,” Franklin said.

Her final album, “A Brand New Me,” paired Franklin’s original recordings of some of her greatest hits with modern musical arrangements from London’s Royal Philharmonic Orchestra.