Watch: Family, lifelong friends and even a US President ensure Aretha Franklin’s funeral is fit for a queen

Aretha Franklin‘s funeral opened Friday with a spirit that would have made the “Queen of Soul” proud.

Detroit’s Greater Grace Temple was packed with her family and friends, who took their spots among star-studded funeral-goers.

Among them were musicians like Ariana Grande, Faith Hill and the Clark Sisters, who performed tributes to the soul legend, and noted speakers such as the Rev. Al Sharpton, Detroit Mayor Mike Duggan, former US Attorney General Eric Holder and former President Bill Clinton.

But it didn’t matter who was or wasn’t famous — everyone had come together to say their last goodbyes to a woman and an artist who had a profound impact on them.

“She gave us pride,” Sharpton said during his remembrance. “And she gave us a regal bar to reach, and that’s why we’re all here.

“We don’t all agree on everything,” he said. “But we agree on Aretha.”

Sharpton read a letter from former President Barack Obama, who honored Franklin’s legacy and her impact on the country.

“In the example she set both as an artist and a citizen, Aretha embodied those most revered virtues of forgiveness and reconciliation,” Obama wrote.

“While the music she made captured some of our deepest human desires, namely affection and respect, and through her voice, her own voice, Aretha lifted those of millions, empowering and inspiring the vulnerable, the downtrodden, and everyone who may have just needed a little love.”

Clinton brought a smile to attendees’ faces with a touching and humorous tribute, recognizing both Franklin’s grace and strength, and professing his admiration for the singer and her resolve.

“This woman got us all here in these seats today, not because she had this breathtaking talent, which she did … but because she lived with courage, not without fear but overcoming her fears.

Early in the service, Bishop Charles H. Ellis III, who was officiating, asked the congregation to stand and applaud Franklin’s family.

“This family has shared their mother, their grandmother, their aunt, their cousin with the entire world,” Ellis said. “Let us all stand and thank them for sharing her with us.”

Among the family was Franklin’s granddaughter Victorie Franklin, who recalled the woman behind the legendary performer.

“I remember when I was a kid people used to always ask me, ‘What does it feel like to be Aretha Franklin’s granddaughter?’ ” she said. “I would always shrug my shoulders and go, ‘I don’t know. It’s just my grandma.’ ”

“Nothing sounded better to me than the way my grandma sings,” she added. “Her voice made you feel something. You felt every word, every note, every emotion in the songs she sang. Her voice brought peace.” 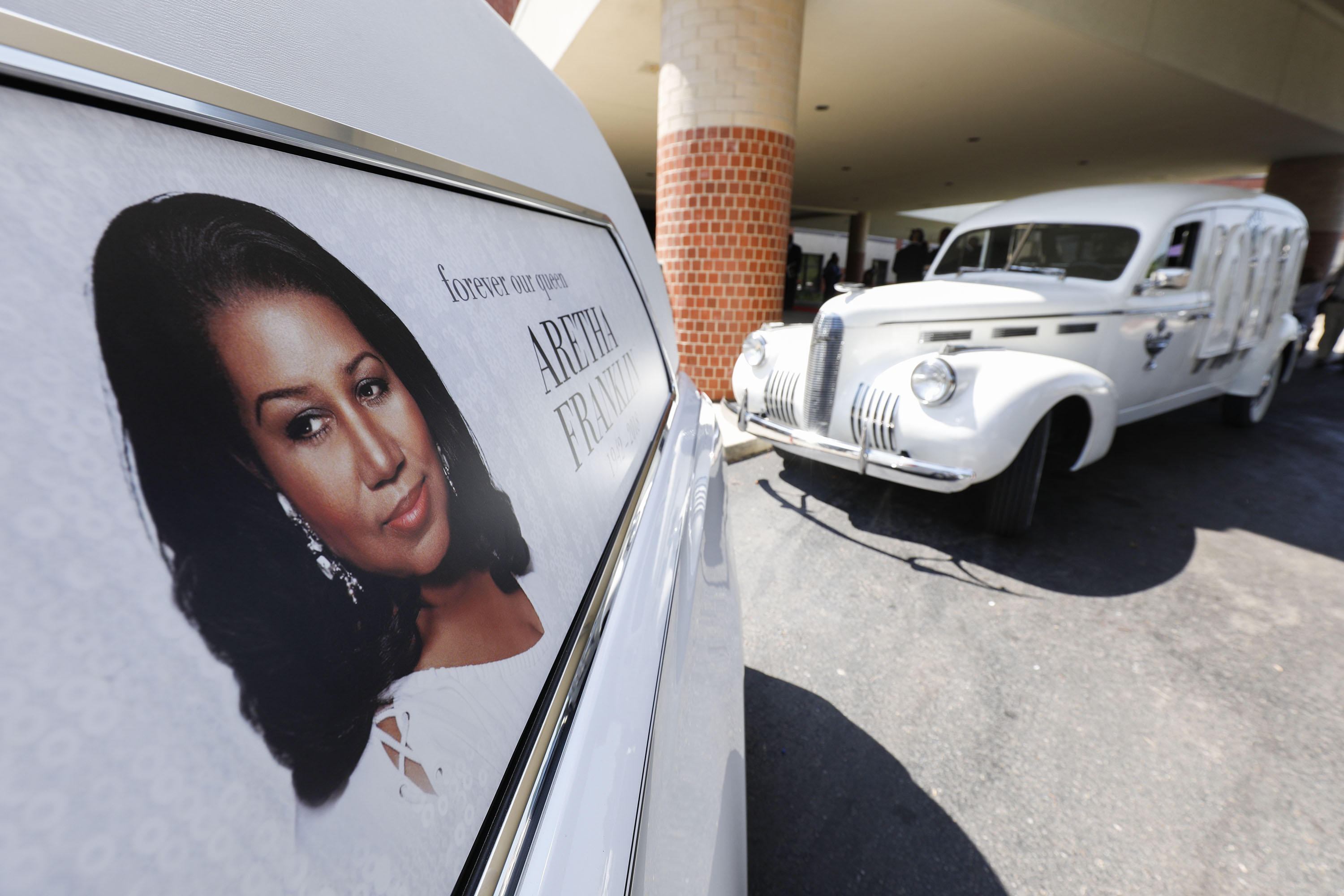 Detroit to name park after ‘Queen of Soul’

Mourners began filling the church early Friday, while Franklin’s fans and dozens of pink Cadillac owners lined up outside, a tribute to the singer’s 1985 hit “Freeway of Love” in which she sang, “We goin’ ridin’ on the freeway of love in my pink Cadillac.”

Franklin’s open casket was placed at the front of the church as mourners streamed by in advance of the service. As they passed, they saw the singer’s body dressed all in gold, with a long sequin gown and high heels to match her gleaming gold casket.

Projected on the walls were the words “A Celebration Fit for the Queen.”

As would be expected for a service honoring the first woman to be inducted into the Rock & Roll Hall of Fame and who won 18 Grammys — among many other honors — music was a central part of the service.

Country singer Hill was the first of many celebrities to perform, belting out a rendition of “What a Friend We Have in Jesus” alongside a rousing gospel choir.

Grande also paid tribute, prompting some funeral attendees to begin dancing as she sang Franklin’s 1967 classic “(You Make Me Feel Like) A Natural Woman.”

Later, Chaka Khan brought down the house with “I’m Going Up Yonder,” and Ron Isley followed, performing the gospel hymn, “His Eye is on the Sparrow.” And Fantasia Barrino-Taylor sang “Take My Hand, Precious Lord.”

The choir brought the crowd to its feet numerous times, and Bishop TD Jakes reminded those gathered of Franklin’s show-stopping Grammy Awards performance of the aria “Nessun Dorma,” which translates as “none shall sleep.”

“And even though it appears she is laying in a box, the song is true,” Jakes said. “None shall sleep. She is not here, she is risen.”

The choir greeted attendees who took their seats in the pews as the processional began, and before long many were on their feet, singing and clapping along.

The casket was closed at the end of the lengthy processional after the singer’s family and friends had said goodbye and as the choir sang, “Jesus, the Light of the World.”

“Walk in the light,” the singers proclaimed as the casket lid was lowered, “the beautiful light. Come where the dewdrops of mercy shine bright.”

Duggan, the Detroit mayor, took to the pulpit and said he wanted to rename the city’s Chene Park after Franklin, and that he was sending a proposal to the City Council to do so.

“Our beautiful waterfront jewel will be Aretha Franklin Park,” he said, “and when performers from generations to come from around the world come here they will be reminded they are performing at the home of the ‘Queen of Soul.’ ”

Remembered for impact on the civil rights movement

When he finally stood up to speak, nearly two hours after he was originally scheduled, civil rights activist the Rev. Jesse Jackson highlighted Franklin’s impact on the civil rights movement, and how it affected her in turn.

“She had money and could not buy ice cream, had a car and could not stop to buy gasoline,” Jackson said. “Aretha came out of the bowels of our struggle.”

Jackson recalled how Franklin and Harry Belafonte went on tour to help raise funds for the Rev. Martin Luther King Jr. and the movement. While she was on stage in Houston, Jackson said, tear gas was pumped into the fans, forcing the evacuation of the building.

“She kept right on singing,” he said.

Jackson called for those gathered to affect change in their own communities, the way that Franklin had done in hers, pointing to the fact that President Donald Trump won Michigan by just a few thousand votes, and that 100,000 Detroit residents were unregistered.

“If you leave here today and don’t register to vote, you dishonored Aretha,” he later added. “If you’ve heard all this singing and don’t feel something, something’s wrong with you.”

Isiah Thomas, the former Detroit Pistons player and a friend of Franklin’s, told CNN he could hardly believe it was time to say goodbye.

“Even though you knew over the last couple of months that she was sick and you knew this day was coming and you thought you would be prepared for it — but now that it’s here it really is overwhelming,” he said.

Shirley Caesar, the famous gospel singer and another friend of Franklin’s, agreed.

“I’ve been wishing and hoping that I will wake up and that this is just a dream,” she said.

Organizers told CNN the service was to touch on Franklin’s significance to her friends, family and fans. Besides the music performances, the spoken tributes and remembrances from major religious and political leaders indicated the influence of a woman who stood on the front lines of the civil rights movement with her music as a frequent anthem.

Franklin’s niece Sabrina Owens, who was to read an obituary, told CNN the funeral service would pay homage to Franklin’s gospel roots and her love of the church.

“We knew we wanted to have certain gospel artists like the Williams Brothers and Pastor Shirley Caesar,” Owens said. “And there were other people who called us wanting to participate.”

Her family wanted to keep the funeral service private to those closest to Franklin — though it was being streamed and portions broadcast by major networks — but worked to provide the singer’s fans an opportunity to say goodbye this week, Owens said.

Viewings earlier this week at the Charles H. Wright Museum of African American History and at Franklin’s childhood parish, New Bethel Baptist Church, as well as an all-star tribute concert Thursday night, were all planned with the public in mind.

But Friday’s service featured those who knew and loved Franklin best, such as her childhood friend, singer Smokey Robinson, who took to the stage and spoke directly to her. He told her how the whole world was mourning her passing.