Norfolk, Va. — Golfers at Ocean View Golf Course braved the elements — and a tornado — in a day that saw many across the area deal with rough and wild weather.

It's been a day of clean up after another day of weather chaos in the area, which included the reported tornado in Norfolk that came in around 11 a.m.

Norfolk Fire and Rescue crews were called out to Ocean View Golf Course after reports of a tornado touching down that sent golfers running for cover. Fortunately, no one was hurt.

"First it started to rain and then the wind picked up and then you had the howling noise that people keep telling you about. it was actually there we can hear it. our dog reacted to it. it kind of told us something was happening," said Frank Paskiewicz, a neighbor in the area who lives near the course.

A tornado warning was in effect for east central York County, the City of Norfolk and the City of Virginia Beach until 11:45 a.m. The storm moved offshore at 11:45 a.m., allowing the warning to expire.

NFR has responded to reports of a tornado touchdown in the area of the OV golf course. Some minor damage, no injuries. Units are starting to clear. Chief Worley.

While it wasn't around for long, the reported tornado left some neighbors with roof damage and without power. Also, a tree split down the middle on the golf course and debris on the roads and sidewalk added to the chaotic aftermath.

"This wasn't supposed to happen because we were looking at the phone and there was no rain, no wind, no nothing and all of a sudden it came up, added Paskiewicz. "We have certainly seen some damage in this neighborhood and I contribute to it kind of being next to the golf course because the winds can really pick up across the course there."

Along with the reported tornado, a waterspout was also seen on the Chesapeake Bay and was captured by a News 3 viewer on their phone.

Here is a viewer video of a waterspout over the Chesapeake Bay, taken from a car traveling over the @HRBT_VA https://t.co/s6J5JnbXtq@chesapeakebay #FirstWarn3 pic.twitter.com/VCuZONpn6o

While residents in the Ocean View area had wild weather on Sunday, they certainly know what is coming.

With Hurricane Florence forecast cone encompassing both Hampton Roads and the North Carolina coast and, projected to intensify into a Category 4 by later this week, many residents like Meredith Corden are curious to see what plans they will have to make.

"I would like to head out of town once we find out more about the course of the storm," said Corden, who also experienced the reported tornado Sunday. 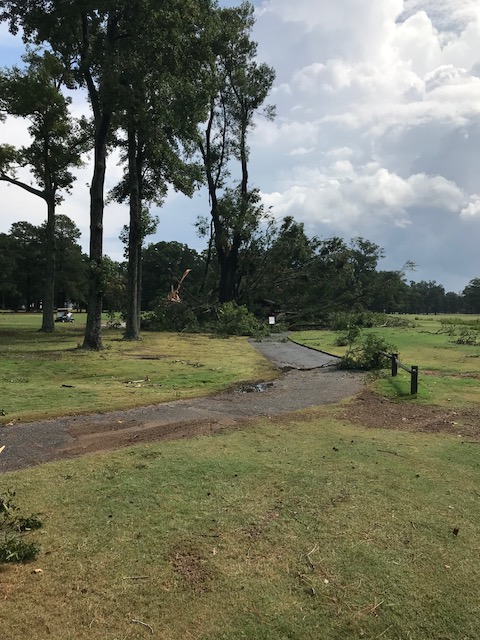