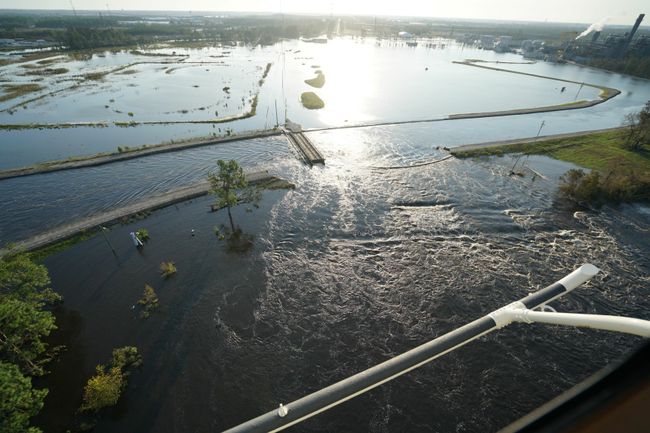 Duke Energy stated that the rising river is continuing over the top north end of the cooling lake dam, a surface protected by a layer of compacted soil and cement.

The water is now exiting the cooling lake through one large, and several smaller breaches on the southern end of the impoundment. The cooling lake water flowed into the natural gas plant footprint as well, Duke Energy said.

“There are two coal ash basins at the site. The company believes that ash in the 1971 ash basin remains in place behind a steel wall separating the excavation area from the cooling lake. That wall is submerged by flood water, but the earthen portion of the basin dam is about two feet above water and stable. There is no visible ash in the cooling lake, and prior to flooding the ash level was at least five feet below the top of the steel wall,” stated Duke Energy.

Cenospheres, are lightweight, hollow beads comprised of alumni and silica that are a byproduct of coal combustion are moving from the 1971 ash basin to the cooling lake and into the Cape Fear River.

Duke Energy said In the 1984 basin, water is more than 10 feet from the earthen dike as it remains stable and has not been affected, nor has the lined landfill which is where most of the site’s ash is disposed.

With the historic levels of flooding on the river, Duke Energy said “There is little to no chance that cooling lake water will contribute to a measurable change to water levels in the area.”