HAMPTON, Va. - The Hampton Police Division is asking for the public's help in identifying the suspects in connection with a series of early morning burglaries at the Hampton Yacht Club in the 4700 block of Victoria Boulevard.

Authorities say on October 5 around 4:15 a.m., four suspects entered the Hampton Yacht Club through the front entrance of the marina. Once inside the marina, the suspects boarded multiple vessels and removed various items such as coolers, navigational equipment, tools and food items. They then left the area on foot and were last seen walking in the area of Victoria Boulevard and Bridge Street.

Members of the yacht club say they take pride in the city of Hampton and are very much concerned about the recent crime.

“This is the gorgeous spot of Hampton. Hampton Creek looking over Hampton University. It’s the most gorgeous place in Hampton and it’s missed by so many people," says Bettyrene Pope.

The suspects were captured on surveillance video, and they are described as follows: 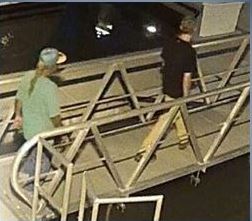