Tropical Storm Michael has claimed a life in North Carolina, bringing the total death toll from the storm to at least six.

Michael’s trail of devastation stretches from the Florida Panhandle, where it wiped out one coastal city and left others swimming in debris, to the Carolinas and Virginia, where flash floods are turning roads into rivers.

Along the way, nearly 1.1 million customers in six states have been left without power.

The dead include four people in Florida, a child in Georgia and a man in North Carolina — and authorities fear the death toll could climb as search-and-rescue efforts continue.

• Interstate 10 has reopened: An 80-mile stretch of I-10 is open after it was closed due to debris.

• Where is Michael? As of Thursday afternoon, the storm was centered about 20 miles north-northwest of Raleigh, North Carolina, and was headed northeast.

• The storm is forecast to intensify: As it moves over the Atlantic as a post-tropical low Thursday night and Friday, it is expected to gain strength.

• Farmers gets pummeled: At least 53 poultry houses were destroyed in Georgia, where agriculture is the top industry, the state’s Department of Agriculture said. Many crops, such as vegetables and cotton, may also be affected. 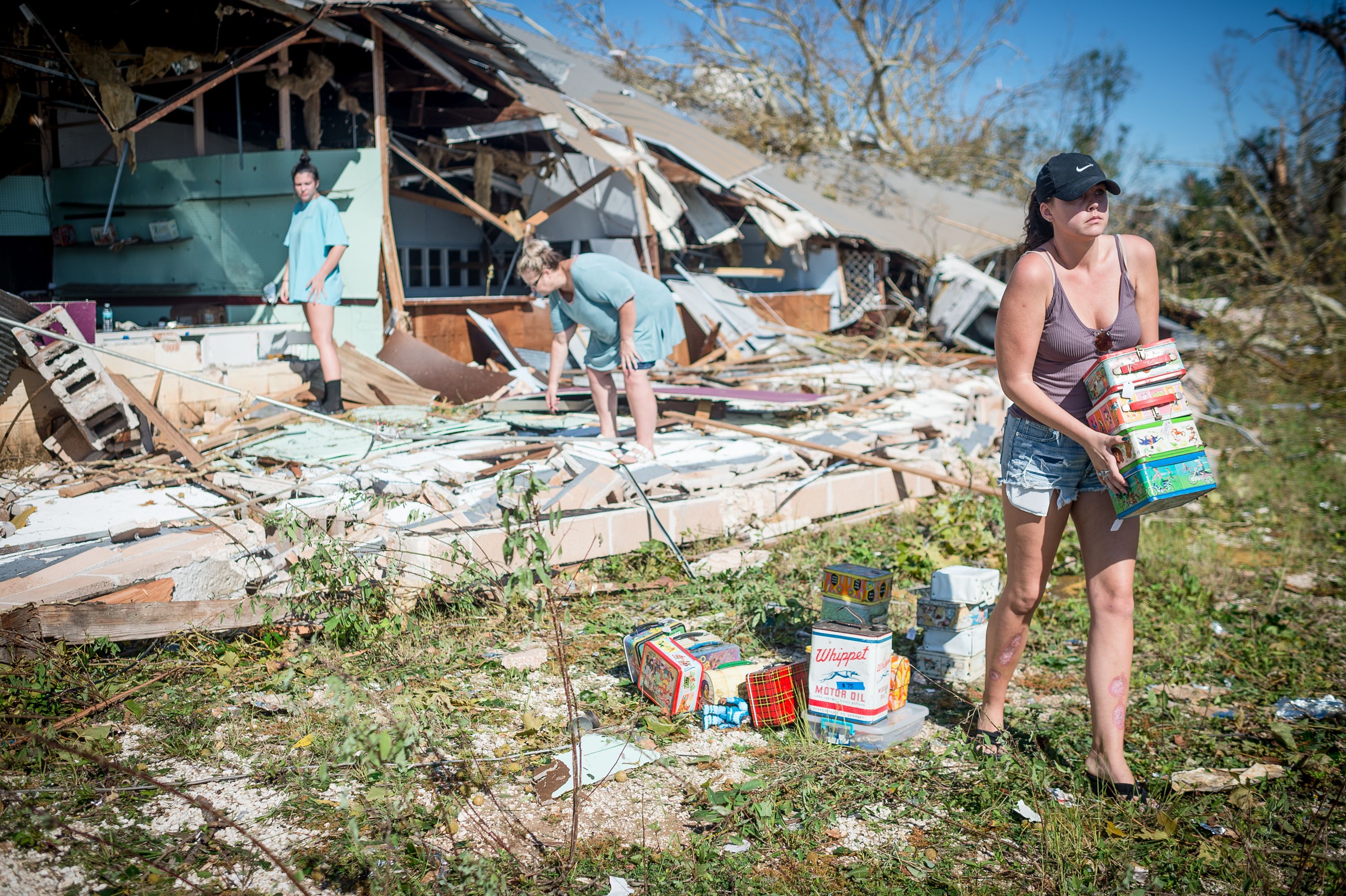 ‘Our lives are gone here’

Catastrophic scenes have emerged across the Florida Panhandle, but none perhaps worse than in Mexico Beach, described as ground zero of the devastation. Receding floodwater are just starting to reveal the extent of damage.

What used to be a gorgeous beachfront city now looks like an apocalyptic mess.

When Boutwell returned to his own house, he discovered furniture in his house that wasn’t his. The walls had collapsed and “the only thing I could find of ours was my briefcase,” he said.

As he looked around, a new reality set in: “Our lives are gone here. All the stores, all the restaurants, everything. There’s nothing left here anymore.”

Mexico Beach councilwoman Linda Albrecht would like to return home, but she says the roads are impassible. She’s desperate for news about the condition of her home, but she can’t reach anyone, she says.

She chokes up talking about it. “I just need to know.”

The students and staff at Jinks Middle School have dealt with disaster before. Last year, they welcomed children who were displaced by Hurricane Maria in Puerto Rico.

This time, the Panama City school was ripped apart by Michael. The debris-covered floor of the school’s gymnasium is now fully visible from outside.

Principal Britt Smith choked up as he looked at images of the decimated building.

“You can’t make sense of it, but what you do is you take the situation, and what we have to make certain that our kids know is that we must be resilient,” Smith said.

“Resiliency is important, and it’s an important life message that we all have to learn. … But at this point, there’s really no making sense. It’s just how do we get together, how do we recover?”

Uprooted trees, downed power poles and limited communications have made things harder for first responders and families trying to reach residents in need.

Megan McCall says her brother Jeff and his family were riding out the storm in the Panhandle. No one has heard from them since Wednesday afternoon.

Her brother was able to tell a friend that his home was starting to get cracks in the walls and water was rushing in Wednesday. A neighbor told McCall that all the docks in the area were destroyed and many people are stuck in their homes as the roads have been blocked with debris.

“I just need to know he’s OK,” McCall said. “If the house and the cars are destroyed they can be replaced, but my niece needs her dad — and as much as I sometimes can’t stand him, I would do anything to just know he’s OK.”

After slamming Florida and lashing Georgia, Michael is now barreling through the storm-weary Carolinas.

Tornadoes, dangerous winds and more flooding are possible in many of the same areas still recovering from Hurricane Florence. Michael is expected to dump up to 7 inches of rain in parts of North Carolina and Virginia, the National Hurricane Center said.

In southwestern Virginia, Emily Waddell said the water level in a creek near her property in Simpsons already surpassed what it experienced during Florence. So far, she says she has lost a chicken coop and four of six of gardens due to Michael’s fallout.

“We didn’t expect it to get this bad,” she told CNN via Instagram.

The impact of climate change on storms

Michael’s strength may reflect the effect of climate change on storms. The planet has warmed significantly over the past several decades, causing changes in the environment.

Human-caused greenhouse gases in the atmosphere create an energy imbalance, with more than 90% of remaining heat trapped by the gases going into the oceans, according to the National Oceanographic and Atmospheric Administration.

While we might not get more storms in a warmer climate, most studies show storms will get stronger and produce more rain. Storm surge is worse now than it was 100 years ago, thanks to the rise in sea levels.

And unless we change the rate of greenhouse gas emissions, we should expect hurricanes to intensify more rapidly in the coming decades, the scientific research group Climate Central said.