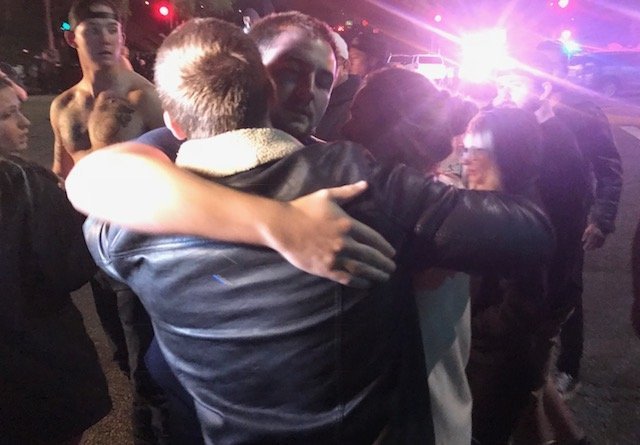 A college country night at a bar in Thousand Oaks, California, turned deadly late Wednesday when 28-year-old Ian Long reportedly forced his way in and opened fire on the young people gathered there. At least 12 people were killed.

Here’s what we know:

How the shooting unfolded

Long reportedly shot a bouncer or security guard outside and forced his way into the bar, witnesses said. Long is also accused of shooting a young woman working at the counter just inside the door, several witnesses said.

“I see that girl every single time I’m there,” witness Holden Harrah told CNN, fighting back tears. “I don’t know her name, but (she) is someone I make small contact with and I say hi every time.”

Officers arrived on the scene 2 to 3 minutes after the initial call to law enforcement as shots continued to ring out, Dean said.

As they entered through the front door, Helus was struck by bullets, Dean said. The highway patrol officer stepped back, pulled Helus from the line of fire and secured his post until more officers arrived.

Ian Long is dead, and his body was found inside the bar, police said. He was dead when police arrived on the scene, Ventura County Sheriff Geoff Dean said.

“It’s well too early to know if he took his own life,” Dean said.

Dean said that officials found a Glock .45-caliber handgun at the scene. The weapon usually holds 10 rounds and one in the chamber, but the gunman used an extended magazine in this shooting, Dean said.

“We have not found any type of assault rifle inside the location,” he said.

Dean said he did not know of Long’s motive.

At least 12 people were killed, including Helus, a 29-year law enforcement veteran.

Helus, who was set to retire within the next year, succumbed to his wounds at a hospital, police said. He is survived by his wife and a son.

The victims’ ages weren’t immediately known, though it’s estimated most were between 21 and 26 years old because “this is a nightclub,” he said.

Several other people were wounded or sustained minor injuries trying to escape the shooting, Dean said.

Twenty-one victims were treated at local hospitals and had been released by Thursday morning, according to the sheriff’s office.

It was not immediately clear whether those victims had been shot.

President Donald Trump extended his sympathies Thursday morning on Twitter to the victims and their families, and he praised the “great bravery” shown by law enforcement.

Thousand Oaks is about 40 miles west of downtown Los Angeles and is “considered one of the safest cities in the country,” Mayor Andy Fox said.

“The reality is that these types of incidents can happen really at any place, at any time, even in communities that are considered extremely safe,” he told CNN.

The venue was hosting a college country night from 9 p.m. PT on Wednesday to 2 a.m. on Thursday when the shooting occurred, according to its website. Hundreds of people were estimated to have attended.

Some freshmen had planned an outing Wednesday to the bar, said Madeleine Carr, news editor at the Pepperdine Graphic, the student newspaper.

“I was going to go with them tonight but decided not to because of homework,” she told CNN, “but it is a popular place to go because it’s local, and we do have a lot of people from the South — it’s line dancing it attracts them.”

Click here for our full coverage on the deadly Thousand Oaks bar shooting.