George H.W. Bush was a prolific letter-writer. Here’s how one of his letters touched my family 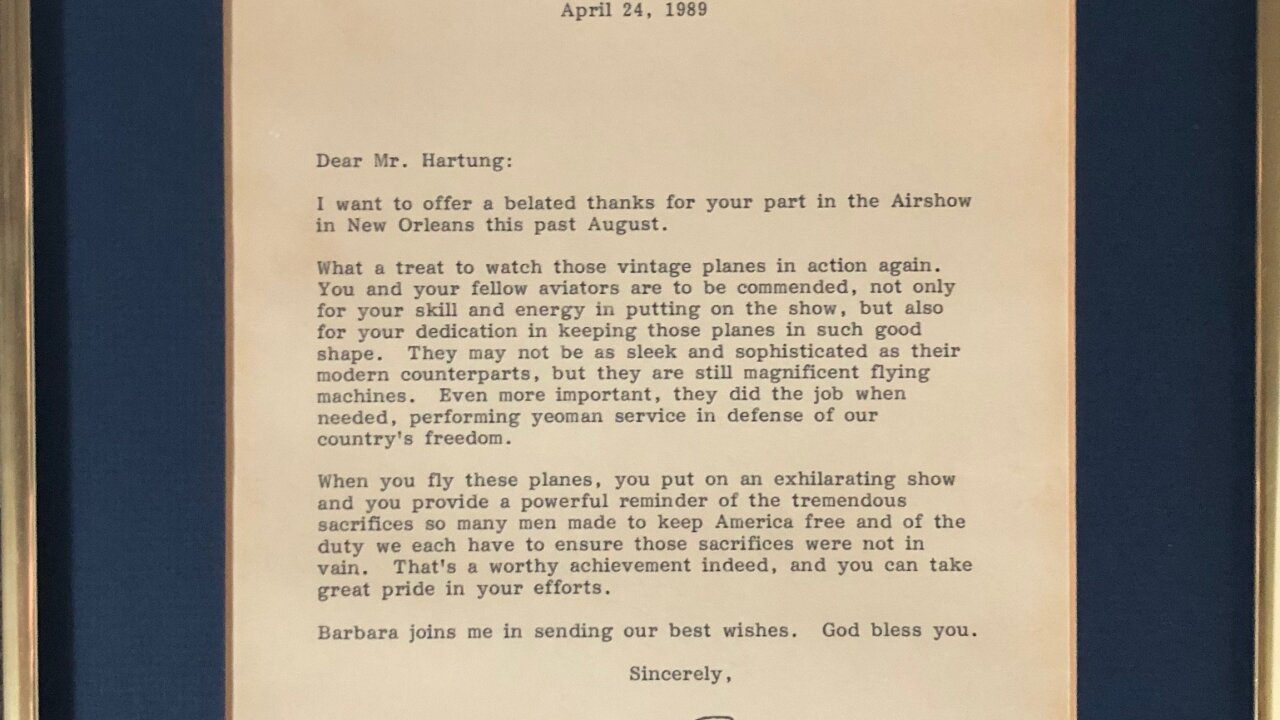 The passing of George H.W. Bush has brought forth so many anecdotes about the life of our 41st President. Whether you’re a fan of his policies and presidential record or not, those who have met him tend to agree that he treated people with kindness. In covering the events following his death for CNN this week, I was reminded of that, when my reporting and my personal life collided in an unexpected way — a letter from George Bush to my late father.

Perhaps you’ve read the letter George H.W. Bush wrote in his final moments in the Oval Office to the man who defeated him, Bill Clinton.

“Your success now is our country’s success,” he wrote. “I am rooting hard for you.”

Or maybe you’ve heard Pierce Bush recount the weekend he crashed his grandfather’s beloved speedboat on the rocks of Walker’s Point in Kennebunkport, Maine, got caught borrowing his grandmother’s car without permission, then in the height of his distress found a note from Bush Sr. saying “I hate to see you worrying and down. You brighten my life, so forget yesterday and today’s little incidents.”

Bush was “the inveterate letter writer,” historian Jon Meacham wrote in his biography of the 41st President, “Destiny and Power: The American Odyssey of George Herbert Walker Bush.”

He penned notes to his family, friends, foes and strangers alike.

In the wake of his passing, countless stories have emerged of treasured letters sent by the former President and the lasting impact his words have had on the recipients.

I’ve heard some of the stories of his famed letters, and told a few anecdotes on air. I knew of Bush’s penchant to pen such letters, but I didn’t really remember why I knew that. But a text message from my mother, Julie, while I was between liveshots brought it all back. My dad had received a letter too.

A genuine sense of connection

My late father, Joe Hartung, was a pilot. He was born in Indonesia in 1952, grew up in the Netherlands, then followed in his father’s footsteps and learned to fly serving in the Royal Dutch Air Force. He came to the United States in 1975 in search of adventure with not much more than his skill as a pilot to his name.

In 1985, the same year I was born, he had saved up enough money to start his own aviation company. Shortly after, he bought his first AT-6 Texan. The WWII advanced trainer aircraft is a familiar plane in the military because it was the last step for pilots before they graduated to fighters. He stripped it down and rebuilt it.

In the coming years, he would travel the world, performing in airshows, flying formation displays, and making a name for himself flying aerobatics and racing WWII aircraft.

In August 1988, just an hour from our home, my dad performed in New Orleans with George H.W. Bush in the crowd.

On Sunday, after a long day reporting the details of how “H.W.” would be memorialized, I got a text message from my mother that brought me to tears. “You’re doing a fantastic job. I thought you might want these. What an incredible man!” She texted me a picture of the framed letter.

Written on White House stationary, it was accompanied by a signed picture of Bush in his bomber jacket. I remembered the frames on my dad’s office wall so long ago, but the significance of the words were clearly lost on my 10-year-old self.

“Your dad was blown away when he got this letter,” she said. “He took it immediately to get it framed.”

The letter is dated April 1989, and it’s clear he genuinely appreciated and felt a connection to the work my father did.

“What a treat to watch those vintage planes in action again,” the President wrote. “You and your fellow aviators are to be commended, not only for your skill and energy in putting on the show, but also for your dedication in keeping those planes in such good shape. They may not be as sleek and sophisticated as their modern counterparts, but they are still magnificent flying machines. Even more important, they did the job when needed, performing yeoman service in defense of our country’s freedom.”

‘A powerful reminder of the tremendous sacrifices’

The 1988 presidential election was looming for the sitting Vice President. Bush, a decorated military veteran, was fighting what Newsweek magazine had dubbed the “wimp factor.” My mom explained to me that his staff thought the opportunity to put him around the types of planes he flew in WWII would remind people there was nothing wimpy about the man who served his country courageously as a naval officer, completed 58 combat missions, was shot down by the Japanese and awarded the Distinguished Flying Cross.

Three months after George Herbert Walker Bush attended that airshow in New Orleans, he was elected the 41st President of the United States.

Another three months after his inauguration, a letter with a return address of 1600 Pennsylvania Ave. was delivered to our modest home in Ventress, Louisiana.

The man who volunteered to serve his country on his 18th birthday, shortly after the attack on Pearl Harbor, became one of the youngest naval aviators at the time, made friends in the war, and lost friends in the war, wrote: “When you fly these planes, you put on an exhilarating show and you provide a powerful reminder of the tremendous sacrifices so many men made to keep America free and of the duty we each have to ensure those sacrifices were not in vain. That’s a worthy achievement indeed, and you can take great pride in your efforts.”

On May 4, 1996, my father died in a plane crash, performing aerobatics before a crowd of thousands in one of those vintage planes, a T-6 on loan from a friend while his was being serviced for its next race.

One of the greatest gifts I could receive

The announcement of Bush’s passing came by way of a statement from his son, George W. Bush, on behalf of his family. “Jeb, Neil, Marvin, Doro and I are saddened to announce that after 94 remarkable years, our dear Dad has died,” the statement read. “George H.W. Bush was a man of the highest character and the best dad a son or daughter could ask for.”

His grandson, George P. Bush, tweeted he “was the greatest man I ever knew.”

The personal sentiments his family shared felt familiar to me. That’s how I’ve always felt about my father. He was the greatest man I’ve ever known, a man of the highest character and the best dad anyone could ask for. And that made my heart hurt for the loss I knew his family was feeling.

More than 22 years after my father’s death, any new story I get to hear about him is a precious gift. To know that these two great men once crossed paths, that our 41st President respected and appreciated my father’s life’s work, and took the time to tell him, is among the greatest gifts I could receive.