Nearly 6,500 Sailors return from deployment ahead of the holidays

NORFOLK, Va. - "Home for the holidays" has an extra special meaning for some 6,500 Sailors.

Many families from across Hampton Roads were at the homecoming, despite the cold weather.

Amy Bell told News 3, "I just haven't seen him in a long time and I'm just like my excitement turns into nervousness a little bit."

"I might cry a few tears here and there, but I'm not sure," said LaShoniqua White "We'll see it depends."

This is after an eight-month deployment across the 2nd, 5th and 6th Fleet areas of operations, the Navy said.

The Navy said HSTCSG deployed April 11 as part of the ongoing rotation of forward deployed forces to support maritime security operations and operate in international waters across the globe.

Commander Gene Black said, "Then we came home for six weeks in the middle of all that for a working port visit. It was like any deployment I've done and it was an absolute thrill and it really showed the flexibility and power of the US Navy Carrier Strike Group."

Captain Nick Dienna told News 3, "We operated in high seas in cold temperatures and in really high winds and you can imagine how physically demanding that is on the flight deck crews and the squadron maintainers who operate 10, 12, 14 hours a day."

Lindsay Napier said she has two young boys who have been waiting for their father to come home.

"They're daddies boys so it's been a little hard," Napier said. "They still think when we see them it's gonna be on the phone so it's gonna be a lot different this time so we're excited."

Many families said the homecoming is the best Christmas present they could have asked for.

"My husband and I we're gonna fly home to Utah to be with family for Christmas," Bell said.

Julia Goodpastor mentioned, "We're going back to Ohio to be with family for Christmas." 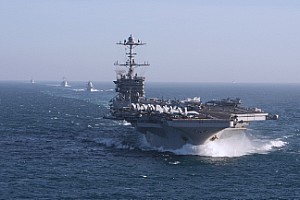 The squadrons returning are:

HSTCSG's ships and aircraft conducted missions including forward naval presence, maritime security operations, and theater security cooperation and participation in numerous bilateral and multilateral operations and exercises to include exercises Lightning Handshake 2018, Baltic Operations 2018 and Trident Juncture 2018, according to the Navy.