Bomb threats made to businesses, government buildings in Hampton Roads and nationwide not credible, police say

At this time it's unclear if the threats -  which have been received locally as well as in San Francisco, New York, San Francisco, Seattle, Miami, Washington, D.C., and other locations - are connected. The FBI and the Bureau of Alcohol, Tobacco, Firearms and Explosives said they are aware of the threats and are working with law enforcement to provide assistance.

Email threats also have been received in Vancouver, Ottawa and Toronto, Canada.

"As always, we encourage the public to remain vigilant and to promptly report suspicious activities which could represent a threat to public safety," the FBI said.

All of the threats were made via email, police said.

Norfolk Police and Fire Rescue have responded to the following locations:

Norfolk Police said each location received the same email, which prompted the businesses to alert authorities.

The Suffolk Fire Marshal's Office said while they have found the threats to be non-credible, the incident remains under investigation.

A source provided News 3 with the text from the email, which demands payment in Bitcoins to avoid repercussions:

"Hello.  My mercenary carried an explosive device (tronitrotoluene) into the building where your company is conducted. It was constructed  under my direction. It has small dimensions and it is covered up very well, it is not able to destroy the structure of the building, but you will get many victims in case of its explosion.

My man keeps the building under the control. If any unusual behavior, panic or emergency is noticed he will blow up the device.

I want to suggest you a transaction. You pay me $20'000 in BTC and the device will not detonate, but do not try to fool me -I ensure you that I will withdraw my man only after 3 confirmations in blockchain network.

It is my Bitcoin address : 1DRXeydtqfjAmvfrLY7XiCo2A1vCq32z3a

You must solve problems with the payment by the end of the workday, if you are late with the money explosive will detonate.

Nothing personal, if I do not see the bitcoin and an explosive device detonates, other commercial enterprises will pay me a lot more, because it isnt a one-time action.

I will not enter this email account. I monitor my Bitcoin wallet every 25 min and if I see the bitcoins I will give the command to my recruited person to get away.

If an explosion occurred and the authorities read this letter!

We are not terrorists and do not take any  responsibility for explosions in other places."

So far, no threat has been found at any of the locations in Norfolk.

In a statement, CHKD confirmed that the threat to the hospital was not credible:

Earlier this afternoon, CHKD was one of dozens of businesses and organizations across the county that received a bomb threat via email. We reported the threat to EVMS Campus Police and the Norfolk Fire Marshall’s office, who informed us that the threat we received was part of a large, nationwide email extortion campaign. There is no credible threat to CHKD.

The Chrysler Museum of Art in Downtown Norfolk, which received one of the threats, said it will be closed for the remainder of Thursday and will reopen at 10 a.m. Friday:

The York County Sheriff's Office also said that the three threats they've received have been cleared:

NEW INFO: The bomb threats have been received via email. It appears our area is just one of many receiving these threats from across the country. The 3 received by the YCSO have been cleared. #YCSONews

On behalf of the City of Newport News, spokesperson Kim Lee said the city received 10 of the email threats, all of which were unfounded:

This afternoon bomb threat emails were sent in to 10 locations in Newport News including government offices and private businesses throughout the city. Police and Fire crews responded and determined that all of the threats were unfounded. We are not releasing the specific locations except to acknowledge what has already been reported which is that City Hall was one of the buildings and it was evacuated for a short period of time this afternoon. We are working with state and federal officials to further investigate the threats. This is all the information available to release.

The Town of Nags Head also said that businesses in the area have also received the threats. Nags Head officials are warning people not to send money or reply to the email.

The FBI issued the following statement regarding the issue:

We are aware of the recent bomb threats made in cities around the country, including in Hampton Roads, and we remain in touch with our law enforcement partners to provide assistance. As always, we encourage the public to remain vigilant and to promptly report suspicious activities which could represent a threat to public safety.

The Bureau of Alcohol, Tobacco, Firearms and Explosives said bomb threats were made in cities all over the United States:

We are aware of recent bomb threats made in cities around the country & remain in touch w/ our law enforcement partners to provide assistance. As always, we encourage the public to remain vigilant & to report suspicious activities that could represent a threat to public safety. 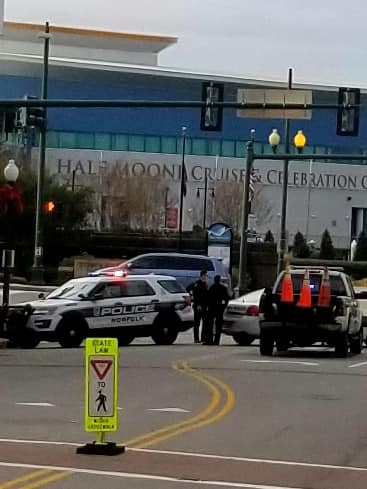