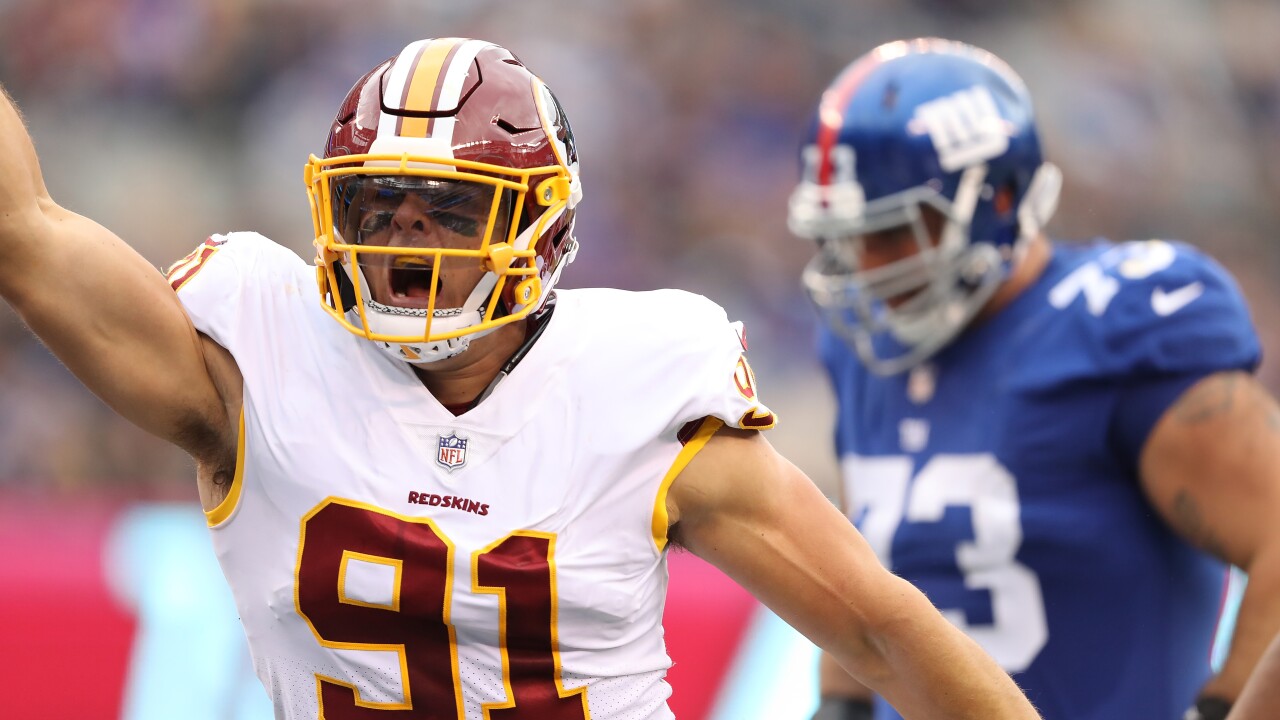 Ryan Kerrigan of the Washington Redskins. (Photo by Elsa/Getty Images)

Ryan Kerrigan of the Washington Redskins. (Photo by Elsa/Getty Images)

Including three selections last season, the Redskins have now produced at least two Pro Bowl players in three consecutive seasons for the first time since the 2012-14 campaigns.

Kerrigan’s selection is his third straight, fourth of his career (2012, 2016-18), and his second consecutive selection in which he was voted as starter. He becomes the first member of the Redskins selected as a starter in back-to-back Pro Bowls since Brian Orakpo earned consecutive starts following the 2009-10 seasons.

Ryan Kerrigan and Jonathan Allen react after a missed field goal by the Dallas Cowboys. (Photo by Joe Robbins/Getty Images)

Kerrigan, 30, has started all 126 regular season games for Washington since being selected with the No. 16 overall pick in the 2011 NFL Draft. His 126 consecutive starts are the longest active streak among NFL linebackers. For his career, Kerrigan has recorded 82.5 sacks, second-most by a member of the Redskins since the NFL adopted sacks as an official statistic in 1982.

Following his two-sack performance against the Jacksonville Jaguars in Week 15, Kerrigan passed Charles Mann and is now nine sacks shy of Dexter Manley (91.0) for first on the Redskins’ all-time career list. With 11 sacks on the season, Kerrigan became the first member of the Redskins to record three consecutive double-digit sack seasons since Dexter Manley accomplished the feat across the 1983-86 seasons.

Williams’ selection is the seventh of his career (2012-18) and his seventh consecutive selection since 2012. With his seventh consecutive selection, Williams joins Ken Houston (seven straight from 1973-79) as the only members of the Redskins to earn seven consecutive Pro Bowl selections. Williams now ties cornerback Darrell Green and Houston for the third-most total selections in team history and becomes only the fifth player in franchise history to earn at least seven career Pro Bowl honors (Chris Hanburger, 9; Charley Taylor, 8; Darrell Green, 7; Ken Houston, 7).

Williams, 30, now in his ninth NFL season, is in his eighth season as an offensive captain for the Redskins and has been among the league’s top left tackles since being selected with the No. 4 overall pick in the 2010 NFL Draft. He has played 118 career regular season games with the Redskins with 117 starts.

Kerrigan and Williams have now been selected to four Pro Bowls as teammates and the first pairing to reach four Pro Bowls together since Gary Clark and Darrell Green (1986-87, 1990-91). With the selections of Kerrigan and Williams this year, the Redskins have now had at least one Pro Bowl player for 25 straight seasons. The only year Washington has not had a Pro Bowler in the game’s history was 1993.