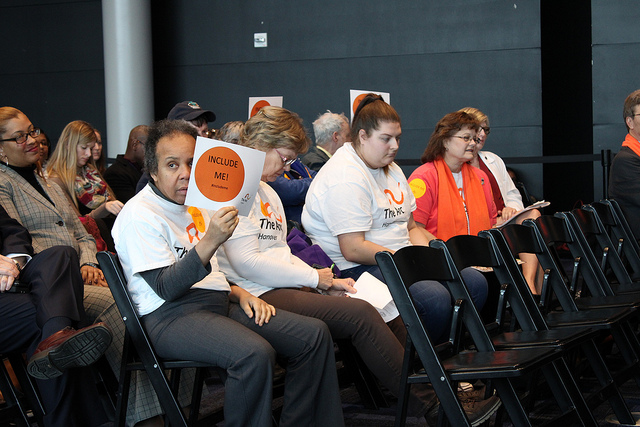 Developmental disability waivers, which are granted by Medicaid, include support services for mental and behavioral health, learning and employment.

According to speakers from The Arc of Virginia — which advocates for those with intellectual and developmental disabilities — about 3,000 of those on the waitlist are classified as “priority one,” meaning they will need waiver services within a year. However, The Arc members recalled experiencing years-long waits to receive resources such as one-on-one job coaching, monitoring of self-administered medications and in-home care tailored to the patient’s needs and independence level.

Cheryl Emory said she had to leave her job years ago to care for her now-young-adult daughter, Virginia, who has a disability.

“At this rate, I’ll be 70 or 80 or have died when Virginia gets a waiver,” Emory told a legislative panel at a hearing on proposed amendments to the state’s 2018-2020 budget. “Today, we’re asking you to fund all of the priority one waiting list.”

The Arc’s executive director, Tonya Milling, said the organization wants the General Assembly to completely fund waivers for those in the “priority one” category, finishing an effort that began last year when waivers were funded for 1,695 of the 3,000 on the waitlist. She estimates $38 million would be necessary to fully fund the remainder of the list.

“You don’t want to waste that big investment, because it’s the biggest one that they’ve made. We don’t want to lose that momentum that they made,” Milling said. “This is the time, this is the opportunity to bring balance to the system before people are in crisis.”

“In-crisis” patients are those with a higher need for services offered by the developmental disability waiver. Many have aging parents with their own health concerns serving as caregivers, putting them at a higher risk of institutionalization, Milling said.

Low pay for at-home health care workers also impacts care for people with intellectual and developmental disabilities, many speakers said. The shortage of care providers means even those who qualify cannot always get sufficient at-home nursing.

Joyce Barnes is an at-home care worker in Henrico County, and said she has to work 12-15 hours per day. She asked General Assembly members to consider increasing wages for at-home care providers, in addition to a 40-hour work week cap that would allow them to receive overtime pay. Barnes also suggested an additional orientation program for at-home health care workers.

Constance Wilson, an at-home care provider, said she helps her clients with bathing, eating and other day-to-day tasks — but also serves as a companion by spending time with them.

“We save the state money to keep people out of the emergency room and out of nursing rooms,” Wilson said.

According to a report by The Commonwealth Fund — a health policy organization — at-home care reduces health care costs by 30 percent and can be more effective than hospital care.

Members of RISE for Youth, an advocacy group addressing youth incarceration, spoke in favor of Gov. Ralph Northam’s budget amendment to fund additional school counselors throughout Virginia. Over two years, Northam’s proposed $36 million for additional school counselors would bring Virginia’s caseload-to-counselor ratio from 425-to-1 to 250-to-1, the nationally recommended level.

Rebecca Keel, a member of RISE for Youth, said some students come to school in “flight-or-fight mode.”

“Their behaviors are criminalized instead of recognized as a cry for help,” Keel said. “Please keep investing in support staff rather than law enforcement.”

The public hearing at the Science Museum of Virginia was one of four held across Virginia on Thursday. The other hearings were in Fairfax, Roanoke and Newport News.