NORFOLK, Va. - Six people accused of attacking and trying to carjack a man in Norfolk last October are facing charges.

Police got the call on October 29.

The victim told officials he met up with a woman he knew from Facebook to go to a Halloween party.

After the party, they allegedly went to the 1700 block of Cottonwood Court.

Court records state that while they were parked at that location, another woman opened the driver's side door and jumped into the victim’s lap.

They state she tried to take the car keys and remove the victim’s seat belt before grabbing the victim’s necklace and pulling out a gun. 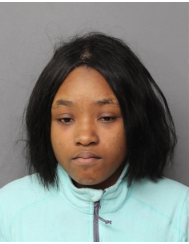 It states the woman the victim went on a date with got out of the car.

The victim grabbed for the gun and threw his car into reverse, the court documents say.

He said he heard four to five shots fired in his direction as he drove off and saw four separate handguns during the entire ordeal, according to the search warrant.

The suspects are charged with various crimes to include carjacking, conspiracy, attempted malicious wounding, use of a firearm to commit a felony, abduction by force and shooting at a car, among other charges.

Most of the suspects are being held without bond.

Broadnax appeared in Norfolk General District Court on February 27 for a preliminary hearing. The following charges were nolle prossed:

She was sentenced to 12 months with all 12 months suspended for attempted carjacking, and will serve two years of unsupervised probation. Her charges of conspiracy, abduction by force and simple assault or battery by a mob were also nolle prossed.

Trotter appeared in Norfolk General District Court on March 4 for a preliminary hearing. All charges except one were certified to the grand jury:

Trotter's charge for abduct by force/intimidation was dismissed.

Cochran appeared in Norfolk Circuit Court on October 2 for a hearing. He was sentenced to 7 years after pleading guilty to an Alford plea to these charges:

Morris pleaded guilty on October 11 to five felony charges and was sentenced to eight years to serve for the convictions with additional suspended time and conditions.

As of October 11, all but one of eight co-defendants have pleaded guilty.