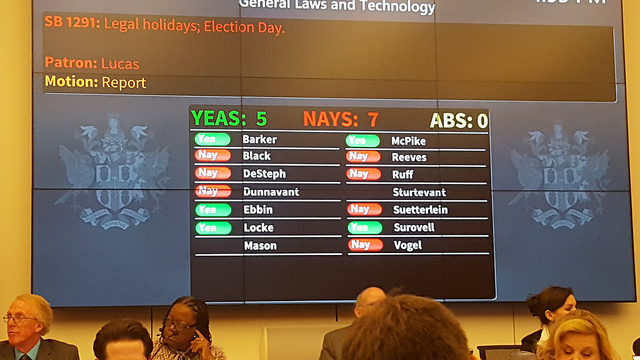 RICHMOND, Va. — A Senate bill to designate Election Day as a state holiday in Virginia is dead for this legislative session.

On a 5-7 vote Monday, the Senate Committee on General Laws and Technology defeated SB 1291, which also would have removed Lee-Jackson Day as a state holiday so that the number of holidays would stay the same.

Sen. Louise Lucas, D-Portsmouth, sponsored the bill seeking to make Election Day — the Tuesday after the first Monday in November — a state holiday.

“There have been cases where voters had to leave polls before casting their votes, simply because they had to return to work,” Lucas said. “Making Election Day a state holiday would make it easier for Virginians to vote.”

In November, voters in Chesterfield County said they waited more than two hours in line to vote — a situation that occurred throughout the nation. Research shows that the U.S. has lower voter turnout than most developed countries — many of which hold elections on weekends or designate the day as a national holiday.

In Virginia in November, voter turnout was below 60 percent.

“This legislation will help protect and expand the right to vote,” Lucas said.

Asif Bhavnagri, Gov. Ralph Northam’s assistant secretary of administration, said the administration supports the bill. There were no comments from the public in opposition to the bill.

Sen. Frank Ruff, R-Clarksville, who chairs the committee, questioned why Lucas proposed removing Lee-Jackson Day as a state holiday. That holiday, which marks the birthdays of Confederate Gens. Robert E. Lee and Thomas J. “Stonewall” Jackson, is observed on the Friday immediately before Martin Luther King Jr. Day (the third Monday in January).

“People who are used to getting four-day holidays that particular weekend, with Lee-Jackson on a Friday and King on Monday — don’t you think they would be a little upset?” Ruff asked.

“Well, I’m sure they would,” Lucas said. “But Mr. Chairman, I think this goes a long way towards helping to expand the number of voters, and that’s more significant to me than having a long weekend.”

“I have unease about the movement to erasing history,” Black said. “Maybe next time, it’ll be Martin Luther King. I would be opposed to erasing something in his honor.”

Lee-Jackson Day is observed only in Virginia. Various localities, including Richmond, Charlottesville, Fairfax and Norfolk, do not observe the holiday.

Lucas’ bill is not the only legislative attempt to declare Election Day as a holiday. In the House of Delegates, Del. Joseph Lindsey, D-Norfolk, has filed a similar proposal – HB 1984. It is awaiting action by a House subcommittee.

In 2016, Donald McEachin — then a state senator and now a member of Congress — also introduced a bill to designate Election Day as a holiday instead of Lee-Jackson Day. The Senate General Laws and Technology Committee defeated McEachin’s bill on a 7-8 vote, with seven Democrats in favor of the bill and eight Republicans opposed to it.

Six of those Republican senators, with the addition of Sen. Siobhan Dunnavant, R-Henrico, voted against Lucas’ bill Monday afternoon, while five of the same Democratic senators — once again — voted for it.

“As expected,” Lucas said, as her bill was defeated. “But I’ll see you again next year.”