The FBI and police from multiple local jurisdictions have been investigating for months, and now Derek Granger, John Rutledge, Timothy Hill, Kevin Farmer, Ja'Kual Ward and Rodriquez Nixon, who allegedly robbed five stores, are behind bars.

The robberies occurred over two months, with the first being in November at the Sprint location on North Mall Drive in Virginia Beach. Employees were zip-tied while the men took cell phones, iPads and Apple Watches.

New court documents show that in each of the robberies, the suspects had guns, forced employees to the back of the store and stole thousands of dollars in merchandise.

Surveillance cameras took pictures of the suspects, and also recorded the getaway cars the suspects left in, allowing police to scan those license plates into their database in order to track down the drivers. 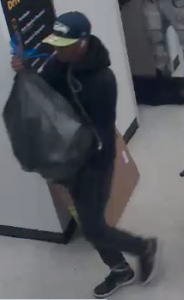 Court records show the men used their phones before, during and after the robberies. Police issued search warrants on those devices and were able to find evidence that linked more suspects to the crime.

The suspects are being held without bond in Chesapeake, Portsmouth and Virginia Beach.