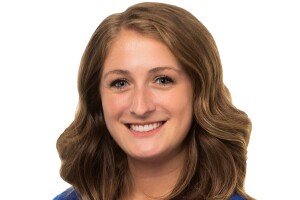 Erin Miller joined the News 3 team in July 2018. Prior to calling Hampton Roads home, Erin worked as a multimedia journalist and weekend evening anchor at WDVM-TV in Hagerstown, Maryland. During her time in the Four State area, she covered the legal immigration process on Capitol Hill, moderated West Virginia’s Republican primary debate for the United States Senate and reported on-scene just hours after a gunman opened fire in an Annapolis newsroom, killing five people.

Though new to Norfolk, Erin is no stranger to Virginia. She spent four years in beautiful Blacksburg earning her Bachelor’s Degree in Multimedia Journalism from Virginia Tech. Go Hokies!

When Erin is not chasing down story leads, you can catch her relaxing on the beach (trying not to get sunburned) or eating her way through town at all of the different restaurants. She’s looking forward to exploring everything that the area has to offer and telling the stories that matter to you!