It’s not every year that a super blood wolf moon happens, so be sure to look up this weekend for one of the first skywatching events of 2019.

Most of the world will be able to catch a glimpse of this rare event, but especially North and South America, Europe and Africa.

But you may be wondering what that name even means. Let’s break it down. 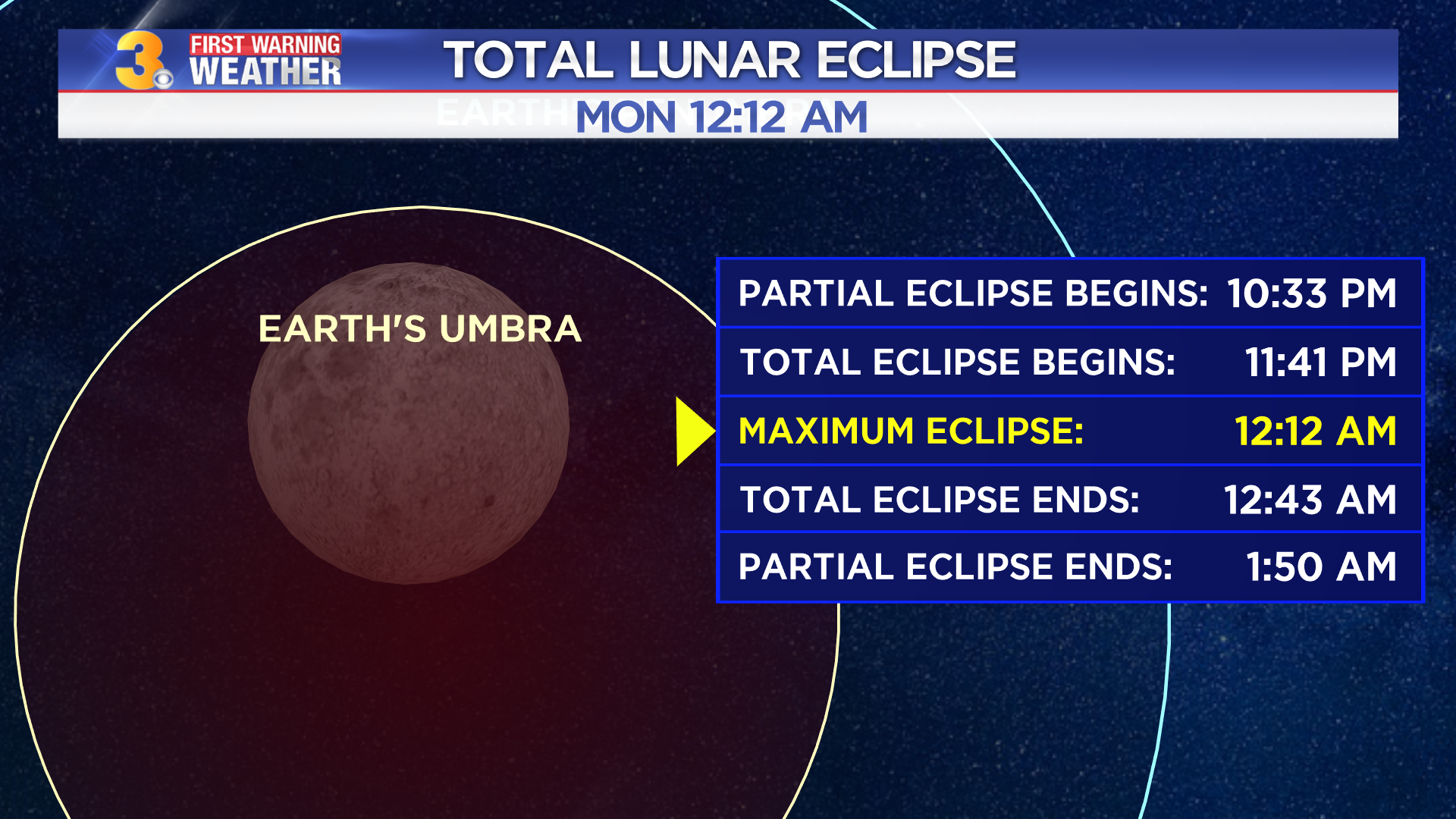 What’s in a name?

Basically, this rare total lunar eclipse is happening at the same time as a supermoon. But there’s a little more to it than that.

Lunar eclipses can occur only during a full moon, and this one is extra special because it’s also a supermoon. A supermoon occurs when the moon is full and closest to Earth in orbit.

The moon will be in perfect alignment with the sun and Earth, with the moon on the opposite side of the Earth from the sun.

Earth will cast two shadows on the moon during the eclipse. The penumbra is the partial outer shadow, and the umbra is the full, dark shadow.

When the full moon moves into Earth’s shadow, it will darken, but it won’t disappear. Sunlight passing through Earth’s atmosphere will light the moon in a dramatic fashion, turning it red.

Depending on weather conditions in your area, it may be rusty, brick-colored or blood-red.

This happens because blue light undergoes stronger atmospheric scattering, so red light will be the most dominant color highlighted as sunlight passes through our atmosphere and casts it on the moon.

So where does the “wolf” part come in? Each moon has its own name associated with the full moon. In January, it’s known as the “wolf moon,” inspired by hungry wolves that howled outside of villages long ago, according to the Old Farmer’s Almanac.

When and where to watch

It’s not every year that a super blood wolf moon happens, so be sure to look up this weekend for one of the first skywatching events of 2019.

“Viewers will see a normal full moon at first starting at around 10:35 p.m. Eastern time,” said Walter Freeman, assistant teaching professor at Syracuse University’s College of Arts and Sciences’ physics department. “At that time, the Earth’s shadow will begin to pass in front of the moon, blocking almost all of the sun’s light from reaching it. Observers will see the moon appear to be progressively ‘swallowed up’ starting from the lower left. This process will end at 11:40 p.m., when the Earth’s shadow covers the whole of the moon’s surface; this is the beginning of ‘totality.’ This will last until around 12:40 a.m., when the motion of the Earth’s shadow will carry it past the moon, and the moon will gradually again be lit by the sun. At 1:45 a.m., the moon will be fully visible again.”

The full eclipse begins at 0440 GMT in the UK and will appear red at 0512 GMT, according to the Royal Astronomical Society.

Most of the world has a good view for this total lunar eclipse, but check Time and Date to see the timing in your area. North and South America, Europe and western Africa will see a total lunar eclipse, but eastern Africa and Asia will only observe a partial eclipse. To be even more precise, the Royal Astronomical Society said viewers in northwestern France, northwestern Spain, Portugal, the eastern Pacific and northeastern tip of Russia will see the total eclipse.

But why don’t we see total lunar eclipses more often?

The Virtual Telescope Project will share a live stream of the lunar eclipse at its brightest above the skyline of Rome.

And unlike solar eclipses, the lunar eclipse is safe to view with the naked eye or binoculars. It also affords a unique view of the sky.

“A blood moon is one of the few opportunities we have to see both the moon and the stars in the sky at the same time, since the moon is usually too bright,” Freeman said.