Kathy Garcia's son, 21-year-old Julian, was already aboard the USS McFaul when she arrived to see him off this morning. With tears in her eyes, she watched as the ship carried her son away.

“It’s bittersweet you know? Proud of him, but I’m just gonna miss him terribly," said Garcia.

Garcia's son is one of many sailors aboard the ship who are on their first deployment. The last time the USS McFaul was deployed? 2015.

It is Commander Janet Days' sixth deployment, but first as the commanding officer of a ship.

As for where they'll be going...Commander Days wouldn't give specifics.

"We're just going east," she said with a laugh.

The USS McFaul was commissioned in April of 1998 and had its maiden deployment later that year. 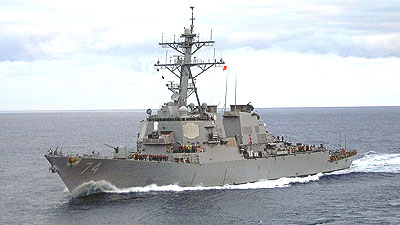