Virginia Lieutenant Governor Justin Fairfax presides over a session of the state senate inside the capital building in dowtown Richmond, on February 4, 2019. - Virginia politics went into further turmoil as the lieutenant governor of the eastern US state, where the governor is under intense pressure to resign, was accused of sexual misconduct. Lieutenant Governor Justin Fairfax, who would take over if Governor Ralph Northam steps down, strongly denied the allegation made by a woman about a sexual encounter they had in a hotel room 15 years ago. (Photo by Logan Cyrus / AFP) (Photo credit should read LOGAN CYRUS/AFP/Getty Images)

Lawyers for Meredith Watson released a statement Friday saying that she was raped by Fairfax while they were both Duke University students in 2000, and called for Fairfax's resignation.

The statement is as follows:

We serve as counsel for Meredith Watson, who was raped by Justin Fairfax in 2000, while they were both students at Duke University. Mr. Fairfax’s attack was premeditated and aggressive. The two were friends but never dated or had any romantic relationship.

Ms. Watson shared her account of the rape with friends in a series of emails and Facebook messages that are now in our possession. Additionally, we have statements from former classmates corroborating that Ms. Watson immediately told friends that Mr. Fairfax had raped her.

Ms. Watson was upset to learn that Mr. Fairfax raped at least one other woman after he attacked her. The details of Ms. Watson’s attack are similar to those described by Dr. Vanessa Tyson.

At this time, Ms. Watson is reluctantly coming forward out of a strong sense of civic duty and her belief that those seeking or serving in public office should be of the highest character. She has no interest in becoming a media personality or reliving the trauma that has greatly affected her life. Similarly, she is not seeking any financial damages.

On behalf of our client, we have notified Justin Fairfax through his attorneys that Ms. Watson hopes he will resign from public office.

Fairfax released his own statement following the statement from Watson's lawyers:

I deny this latest unsubstantiated allegation. It is demonstrably false. I have never forced myself on anyone ever.

I demand a full investigation into these unsubstantiated and false allegations. Such an investigation will confirm my account because I am telling the truth.

I will clear my good name and I have nothing to hide. I have passed two full field background checks by the FBI and run for office in two highly-contested elections with nothing like this being raised before.

It is obvious that a vicious and coordinated smear campaign is being orchestrated against me.

I will not resign.

This comes days after Dr. Vanessa Tyson accused Fairfax of sexual assault at the 2004 Democratic National Convention, where they both worked. According to a statement by Tyson, she says what began as "consensual kissing" turned into a sexual assault.

Fairfax said he remembered a "consensual encounter" with Tyson, but said reading her account was "painful" and that he had "never done anything like what she suggests."

Fairfax released another statement on February 9 that was reported by CNN Washington Correspondent Ryan Nobles.

NEW: ⁦@LGJustinFairfax⁩ continues to resist calls for resignation. He asks for “due process” and reiterates that his interactions with both women were consensual. pic.twitter.com/9yXAv0SpIP

Nobles also tweeted an additional statement from Meredith Watson in regards to a public testimony.

NEW—> Meredith Watson the second woman to come forward accusing @LGJustinFairfax of sexual assault says tonight in a statement from her attorney that she is willing to publicly testify at an impeachment hearing, if one were to happen.

CBS reporter Grace Segers obtained a second statement from Nancy Erika Smith, Watson's attorney, that references a conversation between Fairfax and Watson before the alleged rape.

New statement from Meredith Watson attorney, 2nd Fairfax accuser: "The smears on victims of sexual assault have to stop. Why would any woman come forward with information about a powerful man knowing that he and his supporters will stop at nothing to smear and discredit them?" pic.twitter.com/2lvop7B7qF

"We have heard from numerous sources that in response to Meredith Watson revealing that Justin Fairfax raped her when she was a student at Duke, Mr. Fairfax has chosen to attack his victim again, now smearing her with the typical "she's nuts" defense. He revealed that Ms. Watson was the victim of a prior rape. That is true.

Ms. Watson was raped by a basketball player during her sophomore year at Duke. She went to the Dean, who provided no help and discouraged her from pursuing the claim further. Ms. Watson also told friends, including Justin Fairfax.

Mr. Fairfax then used this prior assault against Ms. Watson, as he explained to her during the only encounter she had with him after the rape. She left a campus party when he arrived, and he followed her out. She turned and asked: "Why did you do it?" Mr. Fairfax answered: "I knew that because of what happened to you last year, you'd be too afraid to say anything." Mr. Fairfax actually used the prior rape of his "friend" against her when he chose to rape her in a premeditated way. Like he is smearing Dr. Vanessa Tyson, Mr. Fairfax is now smearing Ms. Watson. That's shameful.

The smears on victims of sexual assault have to stop. Why would any woman come forward with information about a powerful man knowing that he and his supporters will stop at nothing to smear and discredit them? Women come forward to support one another and to stop the culture of rape that is even more pervasive than we acknowledge."

Along with her statement, Smith also released emails and Facebook messages Watson sent to friends about the alleged rape.

In an email thread from October 2016, you can see messages exchanged between friends preparing for when Fairfax was running for lieutenant governor at the time. Watson replies to the thread, saying, "Justin raped me in college and I don't want to hear anything about him. Please, please, please remove me from any future e-mails about him please."

The Facebook message Smith released, sent on Election Day 2017, says "I see you've been promoting Justin Fairfax on FB [Facebook], despite knowing he raped me, which is mind-blowing to me. Are you seriously voting for him today?" 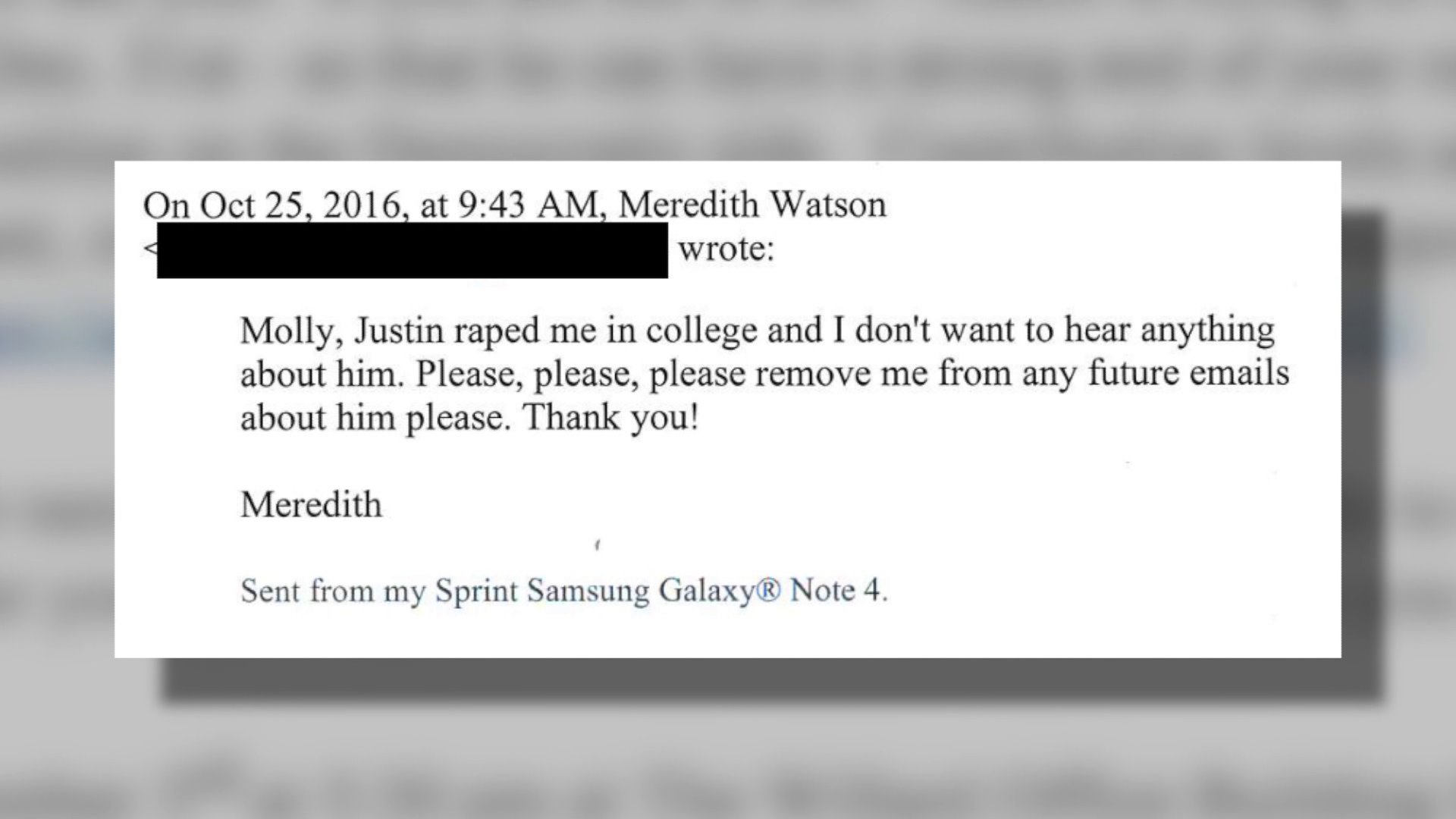 In the hours since Watson came forward, there have been growing calls for resignation and even impeachment.

Former Virginia Gov. Terry McAuliffe called for Fairfax to resign in a tweet, saying, "It is clear to me that he can no longer effectively serve the people of Virginia as Lieutenant Governor."

The allegations against Justin Fairfax are serious and credible. It is clear to me that he can no longer effectively serve the people of Virginia as Lieutenant Governor. I call for his immediate resignation.

Rep. Jennifer Wexton also called for Fairfax's resignation in a tweet, saying she believes both of Fairfax's accusers.

And I believe Lieutenant Governor Justin Fairfax must resign.

“The past seven days have been some of the most painful we can remember. It has been very difficult to marshal the thoughts, let alone the words, to react.

The allegations raised by Dr. Vanessa Tyson and Meredith Watson raise two fundamental questions which Virginia’s leaders are called to answer: do we believe them, and, if so, do we believe that Lt. Governor Justin Fairfax should continue to serve?

We believe Dr. Vanessa Tyson. We found her account compelling and highly credible. The central issue at the heart of her account is consent, and there can be no better authority to decide whether it was given than Dr. Tyson herself. Meredith Watson’s statement describes another extremely disturbing incident, which lends further credence to Dr. Tyson’s story.

All survivors of sexual violence and harassment deserve to be supported and heard, and our commitment to that principle is more important than any political consideration.

The Lieutenant Governor of Virginia presides over the Virginia Senate and must be prepared to fill the role of Governor. It is unacceptable that either of these weighty responsibilities be entrusted to someone who has engaged in the behavior described by Dr. Tyson and Meredith Watson, particularly in light of Gov. Northam’s situation, which we continue to believe requires his resignation.

Lt. Governor Fairfax has also shown exceptionally poor judgment in his handling of these allegations. He repeatedly attacked his accuser, he reportedly used vile and degrading language to describe her, he mischaracterized an investigation into the encounter, and he sought to blame others for events in his own past. These actions do not meet the standard to which we hold Virginia’s highest elected officers.

For these reasons we believe that Justin Fairfax cannot continue to serve at Lt. Governor Of Virginia, and should step aside.”

Rep. Donald McEachin called for Fairfax's resignation in a separate statement from his fellow congresspeople, saying he believes "it is best...if Justin Fairfax dealt with these accusations as a private citizen."

Given recent developments, I believe that it is best for the Commonwealth of Virginia if Justin Fairfax dealt with these accusations as a private citizen. He can no longer serve us as the Lieutenant Governor of Virginia.

The Democratic Party of Virginia called for his resignation in a Saturday statement:

The Virginia Legislative Black Caucus also said they believe it's best for Fairfax to step down in the wake of the allegations, saying they "can't see it in the best interest of the Commonwealth of Virginia for the Lieutenant Governor to remain in his role."

In a statement, Sen. Mark Warner said Fairfax must resign:

“Today's news is devastating. Sexual assault is never acceptable, and survivors of violence and harassment deserve to be heard. ​If these allegations concerning Lieutenant Governor Fairfax are accurate, then they are clearly disqualifying and he must resign.

In the past week, the people of the Commonwealth have been subjected to what seems like an unending barrage of revelations about the past actions, both admitted and alleged, of their elected leaders. Resolving this crisis will require a government with the confidence of the people, justice for those who have been harmed, and a path forward that promotes healing and reconciliation. I am committed to doing everything I can to find this way ahead, but it will not be the work of a single evening. Those of us in elected office who have been endowed with the public'​s trust must always put the Commonwealth first.”

"Lieutenant Governor Fairfax should resign. The allegations against him detail atrocious crimes, and he can no longer effectively serve the Commonwealth. We cannot ever ignore or tolerate sexual assault.”

“There are multiple, serious credible allegations of sexual assault against Lt. Governor Justin Fairfax. I deeply respect the principle of due process and believe that the gravity of this situation demands prudence and deliberation, but the Lt. Governor has clearly lost the trust and confidence of the people of Virginia. His ability to serve has been permanently impaired and, at this point, it is in the best interests of the Commonwealth for him to resign.”

Virginia delegate Patrick A. Hope, a Democrat who represents the Commonwealth's 47th district, announced via Twitter that if Lt. Gov. Justin Fairfax does not resign on his own, he will introduce articles of impeachment against him Monday.

On Monday, I will be introducing articles of impeachment for Lt. Governor Justin Fairfax if he has not resigned before then.