“He served with conviction and compassion”: D.C. reacts to death of Rep. Walter Jones 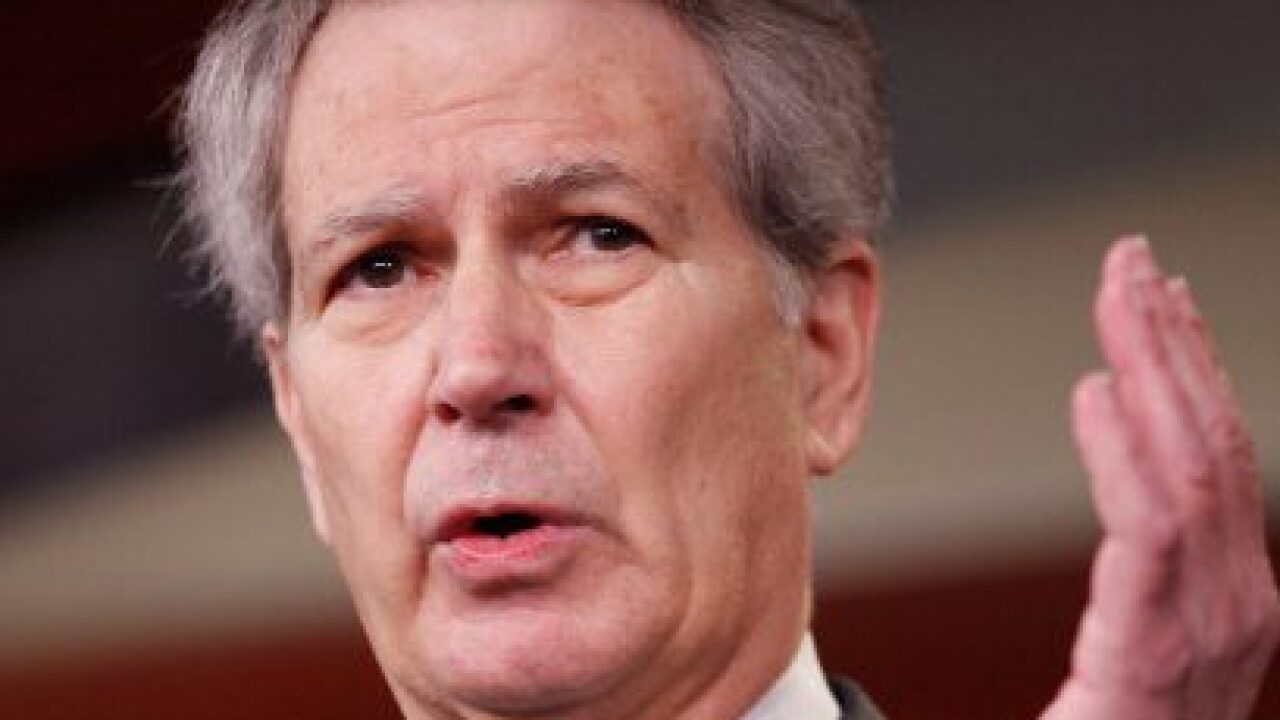 WASHINGTON, DC – MAY 05: Rep. Walter Jones (R-NC) speaks during a news conference to introduce the “Afghanistan Exit and Accountability Act” at the U.S. Capitol May 5, 2011 in Washington, DC. The bill would require President Barack Obama to give Congress a concrete strategy and timeframe for bringing troops home and report on the “human and financial costs of continuing the war.” (Photo by Chip Somodevilla/Getty Images)

In the wake of Rep. Walter Jones’ death on Sunday, many from both sides of the political aisle in Washington shared how Jones served his constituents and country as a member of Congress.

WASHINGTON — MAY 05: Rep. Walter Jones (R-NC) speaks during a news conference to introduce the “Afghanistan Exit and Accountability Act” at the U.S. Capitol May 5, 2011 in Washington, DC. The bill would require President Barack Obama to give Congress a concrete strategy and time frame for bringing troops home and report on the “human and financial costs of continuing the war.” (Photo by Chip Somodevilla/Getty Images)

Many national officials who worked with Rep. Jones (R) on Capitol Hill expressed on social media the respect they had for the 76-year-old.

” I worked with Congressman Jones for many years to draw down our endless wars — he served with conviction and compassion. I was honored to call him both a colleague and a friend,” said Rep. Barbra Lee of California (D). “My heartfelt condolences are with Walter Jones’ family and loved ones during this difficult time.”

Jones went into hospice care due to rapidly declining health following surgery at Vidant Medical Center in Greenville, North Carolina.  The surgery was brought on after Jones broke his hip at his home on January 14.

Members of the U.S. Senate and U.S. House of Representatives highlighted – like Rep. Lee – how they worked with Rep. Jones on legislative matters that were important to him and his constituents.

In a time of partisan politics, many Democrats worked with Rep. Jones (R) on issues ranging from ending the War in Iraq — a war he feverishly supported at first — to environmental issues impacting North Carolina, where he represented people in the Tar Heel state who live in the Outer Banks.

Below are a number of statements from politicians who knew and served with Rep. Jones in Washington:

“My friend and colleague Walter Jones has passed away. Walter was a kind and good man. He was friend and ally. RIP Walter, and prayers for your family.”

“Congressman Walter B. Jones, Jr. was the true embodiment of a public servant. He will be long remembered for his tireless advocacy for Eastern North Carolina, which he loved dearly, and for always following his convictions, no matter the political cost. He always did what he felt was right for his constituents, his district, and his country, and it was no wonder why he was so widely admired and trusted. It was a true honor to serve with Walter Jones. Susan and I send our deepest condolences to Joe Anne and his loving family.”

“Congressman Jones’ family and friends are in my heart and prayers on this difficult day. I saw Congressman Jones as an ally in our bipartisan fight to stop drilling off the mid-Atlantic coastline as we twice introduced the Defend our Coast Act. I send my condolences to Walter’s friends, family, and his longtime partners in the North Carolina congressional delegation.”

“Walter Jones had the strength of his convictions and was passionately committed to ending America’s excessive reliance on its military. Was proud to work with him to repeal outdated war authorizations and limit the executive’s war powers. Congress won’t be the same without him.”

“It’s a sad day for the House of Representatives as we mourn the death of Walter Jones. He was a champion for our nation’s service members, seniors, children, & a faithful servant to the people of North Carolina’s 3rd District. Most importantly, he was a dear friend to many of us.”

“What a loss. Walter Jones was one of a kind. There are few Members of Congress who worked across the aisle like he did and I always sought him out on legislation. We should strive to be more like him. Thinking of his family tonight.”

“Congressman Walter Jones was a true gentleman, a man of deep faith, and a man of principle, who selflessly served the people of North Carolina’s 3rd District. I was proud to work with him in the House of Representatives and my heart goes out to his wife and family.”

“RIP, Rep. Walter Jones. He was a friend & one of my best partners across the aisle. I first met Walter when I was a Hill intern. Not only was he kind enough to talk to me, he remembered my name, and checked in on me throughout that summer. His constituents were lucky to have him.”

“My condolences to the family of Congressman Walter Jones, my former colleague. He will be missed.”

“Walter Jones was one of a kind. He served with conviction, humility, generosity and kindness. My condolences to Jo Anne and the Jones family.”

“My prayers are with the family and friends of Walter Jones. It was an honor to work with Walter on a number of issues, including campaign finance reform, nuclear launch authority and Yemen. He was a great public servant and will be missed.”

“Walter Jones always did what he thought was right. He was guided by his principles and never the passions of the moment. Walter sought bipartisanship and we worked together frequently. He was also my friend. I will miss him enormously. I mourn with the Jones family.”

“Walter Jones was a man of integrity, strong values, and great patriotism. My prayers are with his family and the people of NC’s 3rd District, for whom he worked for a quarter of a century.”

“Walter Jones was a thoughtful, devoted legislator who always did what he felt was right. I was especially proud to work with him to push for bringing our troops home from Afghanistan. He will be deeply missed.”

“My wife Lisa and I are saddened to hear of the passing of Congressman Walter Jones. I have known Walter since working together on the 1976 Jimmy Carter presidential campaign.”

“I am very saddened to hear of the passing of my friend and colleague from North Carolina, Walter Jones, Jr. Please join me in remembering his service to our state and country and praying for his family.”

“I am sad to learn that Walter Jones passed away today, on his 76th birthday, but know he is with our Savior now. I wish I could have worked with him, but his commitment to liberty, limited Constitutional government, & our men & women in uniform will serve as an inspiration. RIP.”