Looking for a mate? Head to this old Taiwan temple for a meeting with the ‘Love God’ 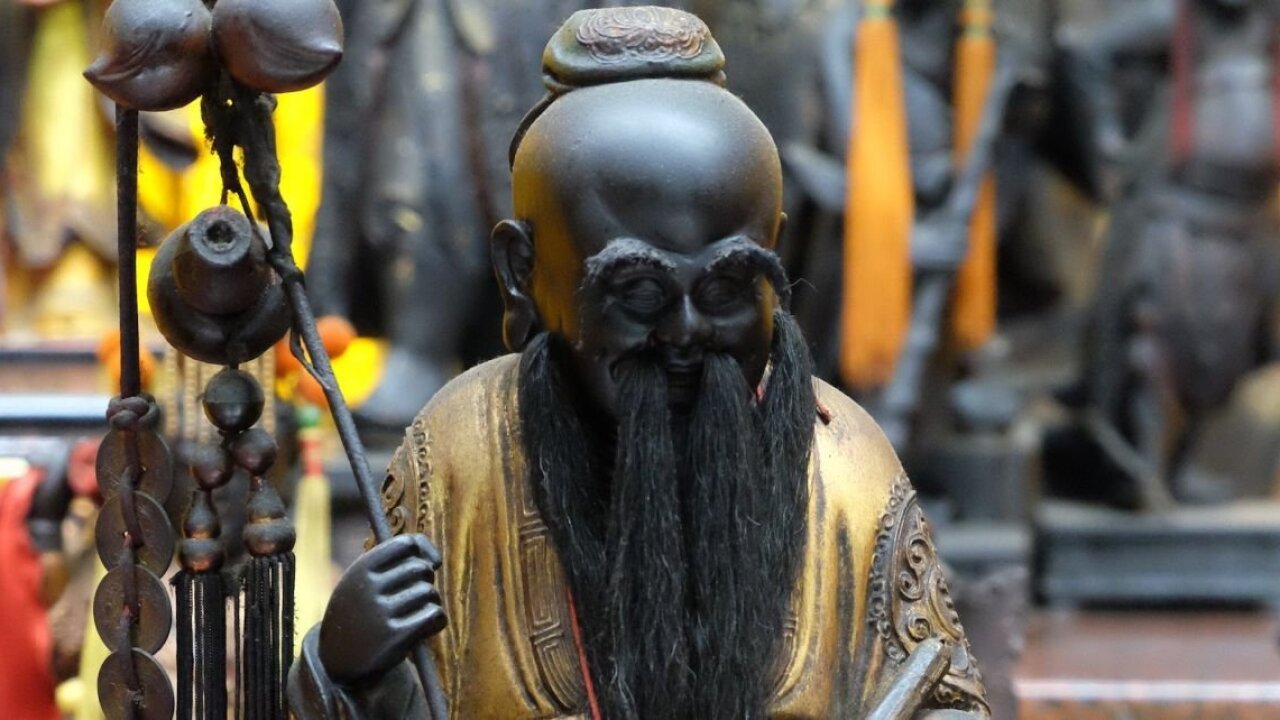 “The Matchmaker” or “The Old Man under the Moon” is the deity of love and marriage in Chinese mythology. A statue of ‘The Matchmaker’ is seen here at the Xia Hai City God temple in Taipei.

“The Matchmaker” or “The Old Man under the Moon” is the deity of love and marriage in Chinese mythology. A statue of ‘The Matchmaker’ is seen here at the Xia Hai City God temple in Taipei.

These days, it’s all about swiping right to find a partner. But some Taiwan residents have another method for finding romance besides Tinder — they call on the god of marriage and love.

According to Chinese mythology, the Love God, or Yue Lao, is in possession of a “book of marriages,” and can find and bind you to the one you’re meant to be with, with a red string.

The story goes that during the Tang Dynasty (618-907 AD), a man asked the Love God to show him his future wife. But he didn’t believe the Love God and had the girl attacked. But in the future, when he actually met his wife, she had a scar from that same attack.

Taking this somewhat gruesome story to heart, many started believing in the Love God — also referred to as “The Matchmaker” or “The Old Man under the Moon” — starting in the Qing Dynasty (1644 to 1912), says associate professor Isaac Yue of the University of Hong Kong.

Today, believers continue to pray at statues of his likeness throughout Asia. And while there are larger, more colorful, even blingier, Love God sculptures in the region, the one in Taipei’s Xia Hai City God Temple is the most popular.

“I can’t promise anything, but if you believe, you will be successful,” says Naomi Lee, a guide at the temple. “If you don’t believe, he can’t help you.”

Around 500 lovelorn visitors flock to this Taiwanese temple every day, estimates Lee. And on days like Valentine’s Day or Lunar New Year, more than 1,000 pass through.

Some are repeat visitors, too. Successful couples are obliged to bring back wedding cookies — and judging by the piles of cookie boxes we saw during our visit, there have been many happy partnerships.

In 2014, there were around 5,000 successful matches, says Bob Chen, a guide with the Taipei Walking Tour.

The Xia Hai temple is about 40 minutes from the center of Taipei, Taiwan’s capital.

It was built in 1859, but the Love God’s statue wasn’t added until 1971. Measuring only 43 centimeters tall, this likeness of Yue Lao, is mightier than the others, because he is standing, not sitting, and ready to perform his magic, explains Chen.

And unlike other temples, one can intercede for family members, meaning you don’t have to directly meet this Love God.

Another factor loaning to this temple’s potency, says Chen, is that its City God — not to be confused with the Love God — has a wife.

Many temples have statues of City Gods, who act as guardians for the metropolis. But it’s rare to find one who is married.

Residents gave the Xia Hai City God a wife — also represented by a statue — after discovering that women were fainting during the annual summer parade at the temple. It was the result, Chen says, of the City God being single. So now, when anyone visits, they must pray to the happy couple as well.

“Everybody should come here and do it,” says Chiang Hung Chen, 40, a traveler from Vietnam who has been married for eight years.

“I found my husband a year after I visited the temple. Now I need to come back and say thanks.”

The prayer process is quite complicated and it can take more than 30 minutes to complete all 12 of the steps, which are outlined on a sign at the temple. It entails buying an offering set for around $9, then lighting incense, praying to the City God, his wife and the Love God, plus eating wedding cookies left by successful couples.

When praying to the Love God, Lee says you have to be as detailed as possible. First introduce yourself by giving your name, age and address, and then give as much information as possible, right down to personality traits, of the person you want as your partner.

The offering set also includes a red string and a Love God amulet, which worshipers must keep on their body or purse until the promise is fulfilled.

“She never paid attention to me”

For Omi Chen, the Love God was a bit of a last resort.

“I chased her for two years,” said Chen, 32. “She never paid attention to me, until I went to the temple and asked the Love God for help.”

Two months after he visited the temple, he says she responded.

“I thought he didn’t understand me, that he wasn’t serious about getting together,” says Chen’s former coworker, and now wife, Yuli Cheng, 33.

Now they own a milk tea shop together — the fulfillment of a promise to the Love God, Chen says. If the Love God was able to help him, he said, he would go on to help others.

The two started the business with a vending machine in 2016. The shop, now open for about two years, is a couple blocks from the temple, but the machine is right across the street. The machine also serves milk tea and each of the bottles contains a love fortune.

There are some 500 to 600 sayings hidden in the bottles and contain advice from their friends in love. For example, one says that “It is more important for one person to truly love you than to be popular among many.”

“Lots of our customers come here and ask for advice,” says Cheng. “But we send them to the temple to ask the Love God instead.”

And after visiting the temple or grabbing one of Chen’s drinks for a fortune, if one still isn’t happy with the results, there’s allegedly a Break-Up God, residing at a temple only 40 minutes away.

“He’s single, so he will cut a relationship,” says tour guide Chen.

The area around Xia Hai City God Temple, Dadaocheng, is known for its tea, having been a tea export port in the past. It’s also the setting of a recent original series by Netflix, “A Taiwanese Tale of Two Cities.”