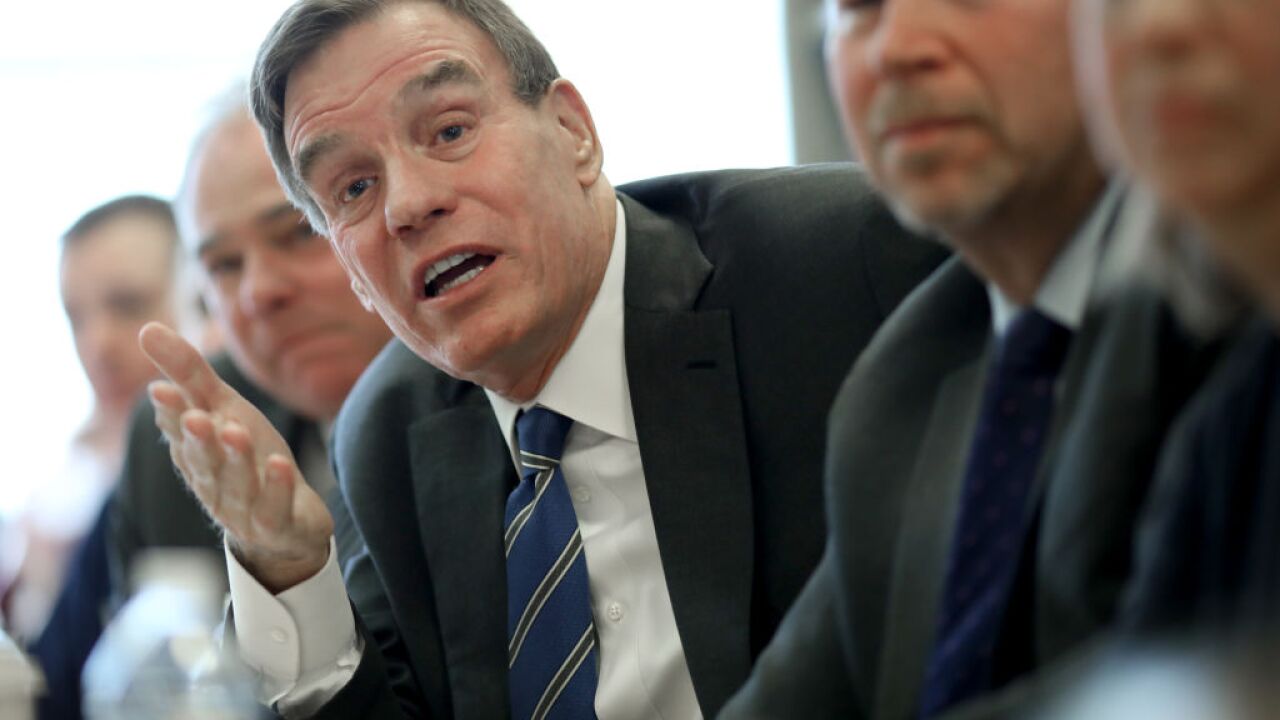 ALEXANDRIA, VA – JANUARY 11: Sen. Mark Warner (C) (D-VA) and Sen. Tim Kaine (2nd L) (D-VA) talk with furloughed government employees about how the government shutdown has impacted their lives and finances during a roundtable discussion in Alexandria, Virginia January 11, 2019. Government employees will miss their first paycheck today as the shutdown threatens to become the longest shutdown in history. (Photo by Win McNamee/Getty Images)

WASHINGTON –U.S. Sens. Mark Warner and John Thune have introduced legislation that would allow employers to offer tax-free money towards their student loans.

The legislation would help Americans tackle their student loan debt.

The Employer Participation in Repayment Act would allow employers to contribute up to $5,250 tax-free to their employees’ student loans, providing employees with relief and employers  a unique tool to attract and retain employees.

“As the first in my family to graduate from college, I wouldn’t have been able to afford my college tuition without the help of student loans,” said Sen. Warner. “Unfortunately as the cost of higher education continues to skyrocket, so has the rate of Americans who turn to student loans to pay for college. Today too many Americans are saddled with tough-to-managestudent loan debt, with no end in sight. That’s why I’ve teamed up with Sen. Thune to create an innovative, bipartisan approach to help ease the burden of student loans. By making employer student loan repayments tax-exempt, employers will have a new tool to recruit and retain a talented workforce while also helping working Americans manage their financial future.”

Reports show that one in four Americans have student loans, and student debt in the U.S. reached $1.5 trillion in 2018.

Student debt is a significant financial burden that not only influences the way our workforce saves and spends, but also has a stifling effect on the economy.

“Today’s economy is strong, and I believe we should keep our foot on the gas by passing common-sense bills like the one Sen. Warner and I have proposed that would give young career seekers additional tools to help overcome the burden of student loan debt and empower employers to attract future talent,” said Sen. Thune. “It’s no secret that as today’s college graduates look toward the next chapter in life, they often trade their cap and gown for debt and uncertainty. This bipartisan legislation, which I view as a win-win for graduates and employers, is good policy and one that I hope garners strong support.”

The Warner-Thune bill would update an already existing federal program so that it works better for employees living with the reality of heavy student loan debt.

Currently, the Employer Education Assistance Program only provides assistance for workers who are seeking additional education. It does not extend to individuals who have already incurred student loan debt during their undergraduate or graduate studies.

The legislation has also been introduced in the House of Representatives by Reps. Scott Peters and (D-CA) and Rodney Davis (R-IL) and has support from numerous educational organizations.