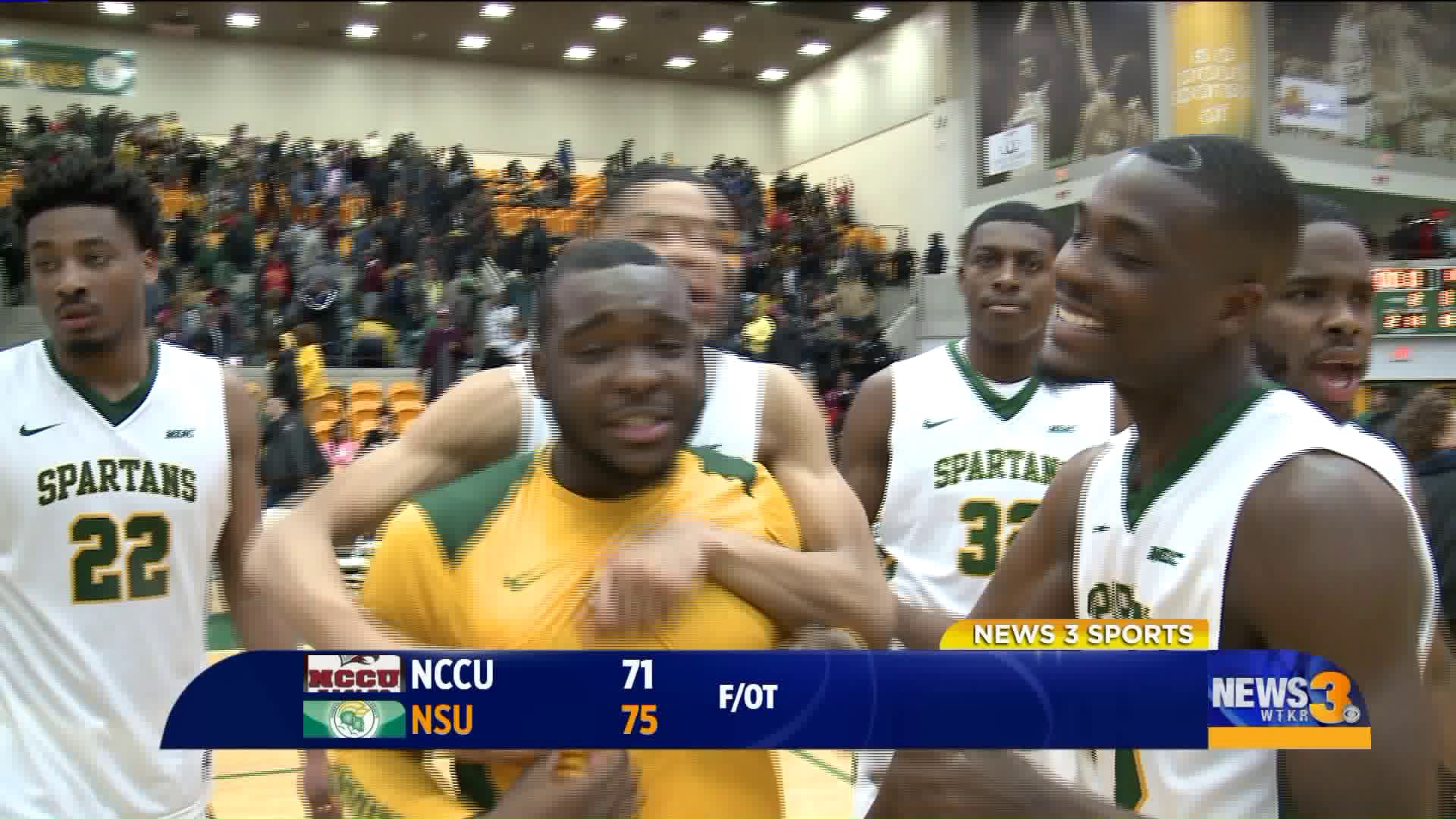 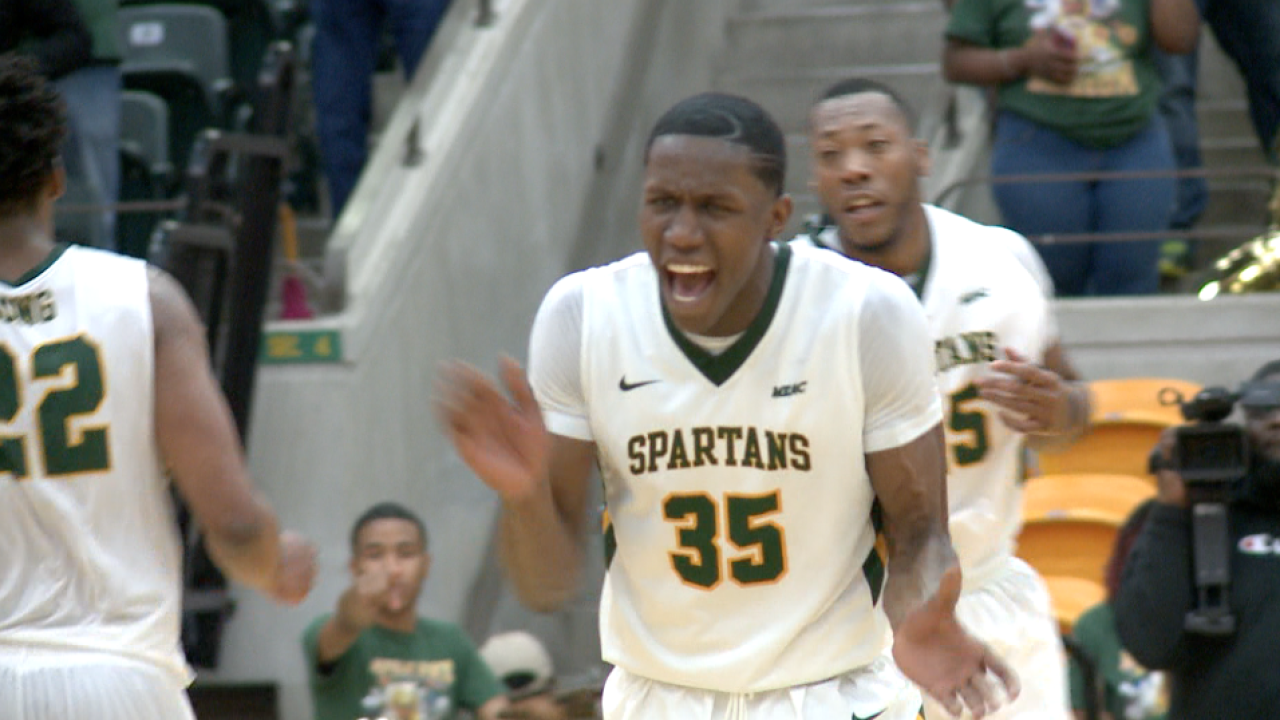 NORFOLK, Va. (NSUSpartans.com) - Down five with less than a minute left, the Norfolk State men's basketball team was able to come back, force overtime and pull off an improbable comeback against North Carolina Central on Saturday evening.

Led by senior Derrik Jamerson's perfect night from deep, the Spartans handed the Eagles a 75-71 loss at Joseph Echols Hall.

Jamerson made 7-of-7 from 3-point range for the night and finished with 23 points and five rebounds. He had five treys in the second half, as NSU trailed the entire period until sophomore Mastadi Pitt drove and hit a five-foot bank shot with 1.7 seconds left.

The Spartans had gotten to within one after Jamerson knocked down a 3-pointer from several feet beyond the top of the key with 12 seconds left. NCCU went 1-of-2 from the line twice in the last 20 seconds to give the Spartans a chance to tie and force the extra five minutes.

They did exactly that, and in overtime another 3-pointer from Jamerson put the Spartans ahead by four. NSU's lead was only one with 1:07 left in overtime, but the Eagles twice missed layups in the last 20 seconds of the game as NSU hung on for the win.

The victory was key for the Spartans, as they maintained first place in the league at 10-1 while improving to 15-11 overall. Second-place North Carolina A&T also won on Saturday to move to 9-2. NCCU, third in the standings coming into the day, fell to 7-5 in the MEAC and 12-14 overall.

Jamerson became the first NSU player ever to make at least five 3-pointers without a miss, much less seven. In addition, freshman C.J. Kelly made 6-of-8 from the field for a 19-point night with five rebounds. NSU's defense held the Eagles to 36 percent shooting for the evening.

The Eagles led for nearly nine minutes in the first half and the entire second half until Pitt's last second shot. But the game started off slow.

The Eagles missed their first five field goal attempts as NSU led by three early on. NCCU was ahead by three about five and a half minutes in as both teams struggled from the field. Senior Armani Branch knocked down a wide-open 3-pointer to counter a trey from the Eagles, which gave the Spartans a 14-13 advantage with 8:13 left in the half.

Jamerson put the Spartans ahead again with a 3-pointer from the corner with 4:30 left, and Kelly did the same with a trey a few minutes later. But the Eagles got long range shots from Larry McKnight to go into the half up 29-25.

Jamerson knocked down a 3-pointer to get the Spartans going early in the second half before the Eagles pushed their lead to seven about four minutes in. He hit a couple more to keep the Spartans close, but with less than 10 minutes to go the Eagles went up by eight on Zacarry Douglas' 3-point play.

Another Jamerson trey, followed by a 3-point play by Kelly, got the Spartans to within two at 51-49 with 6:44 left. Randy Miller Jr., however, sank a pair from beyond the arc to push the lead back to eight for the Eagles with 3:51 to go.

They still held a seven-point advantage with 2:10 on the clock, but Kelly made his second 3 and then a layup with 36 seconds left to help NSU close the gap by the end. His layup and two free throws late in overtime were key as well. Jamerson made 1-of-2 from the charity stripe with 18.1 seconds left in OT, and Thomas made both shots from the line with 5.9 to go to finish the win.

Senior Alex Long contributed 10 points for the Spartans, who hit 41 percent for the night, including 10-of-20 from deep. They also benefitted from 21 Eagle turnovers.

McKnight led the Eagles with 18 points, while Miller added 17. Raasean Davis totaled 14 points and 11 rebounds, helping his team to a 46-33 advantage on the glass, including 11-4 on the offensive side.