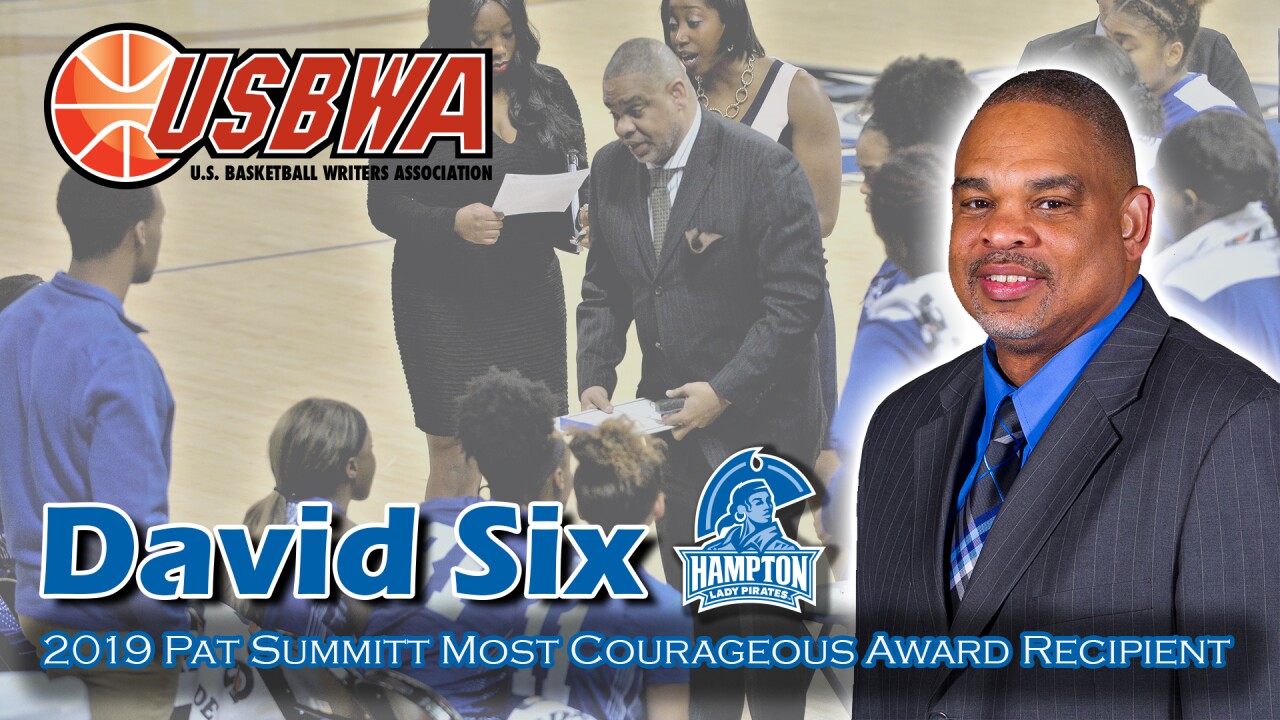 HAMPTON, Va. (Hampton U. Athletics) – After a summer of work to get back on the basketball court following a stroke in late June, Hampton University Lady Pirates head coach David Six will be making a trip to the Final Four this season – for some hardware.

Six was announced today as the U.S. Basketball Writers Association’s (USBWA) 2019 Pat Summitt Most Courageous Award recipient.  He will receive his award at a luncheon on April 5 in Tampa, Florida prior to the national semifinals.

“It’s an extreme honor to congratulate coach Six on his 2019 Pat Summit Most Courageous Award,” said Hampton University President Dr. William R. Harvey.  “After his health scare this summer, to see him on the sidelines leading the Lady Pirates is a blessing and Hampton Nation couldn’t be happier with him and congratulate him on this prestigious award.”

“For all that Pat Summitt has done for women’s basketball, to be associated with an award that has her name is amazing,” said Six.

Pat Summitt, the legendary Hall of Fame Tennessee women’s coach, had the award named after her in 2012 when she received the award in the wake of her battle against Early-onset Alzheimer’s being revealed the previous summer.

Summitt, the first women’s coach to surpass 1,000 victories, ultimately succumbed to the disease in June of 2016.

In the midst of his tenth season at the helm of the Lady Pirates, Six’s summer consisted more of work in rehabilitation than recruiting.   Driving his wife to an appointment at Johns Hopkins Hospital in late June, he felt some discomfort and heaviness in his right arm.  Upon arriving for the appointment, he fell in the parking lot.

A doctor found him and got him inside where he eventually made his way to the emergency room.  As he sat to have his vitals taken, he fell again.   It was then determined that he was having a stroke.

As he told the Daily Press’ Dave Johnson in a story about him after winning his 200th career game in late November, hitting that milestone was extra special.  “Two hundred meant so much more because of all I’ve been through,” Six said. “I don’t want to say me — my family, my team, a lot of people. They’ve all been supportive from the very beginning, especially when you don’t know ‘can this guy still do this job?’

“Everything was greatly appreciated. Because you know now that could be taken away from you.”

He attacked “Boot-camp” rehab with a vigor and was released into a rehab facility on July 4.  At the end of the month he went to live with his daughter before coming back to the area a couple weeks later.

Six was on the bench for the opening game at Florida Atlantic and now has his Lady Pirates sitting among the league leaders heading into the final weeks of the Big South regular season.

Congratulations Coach Six for your recognition as the 2019 Pat Summit Most Courageous Award winner.