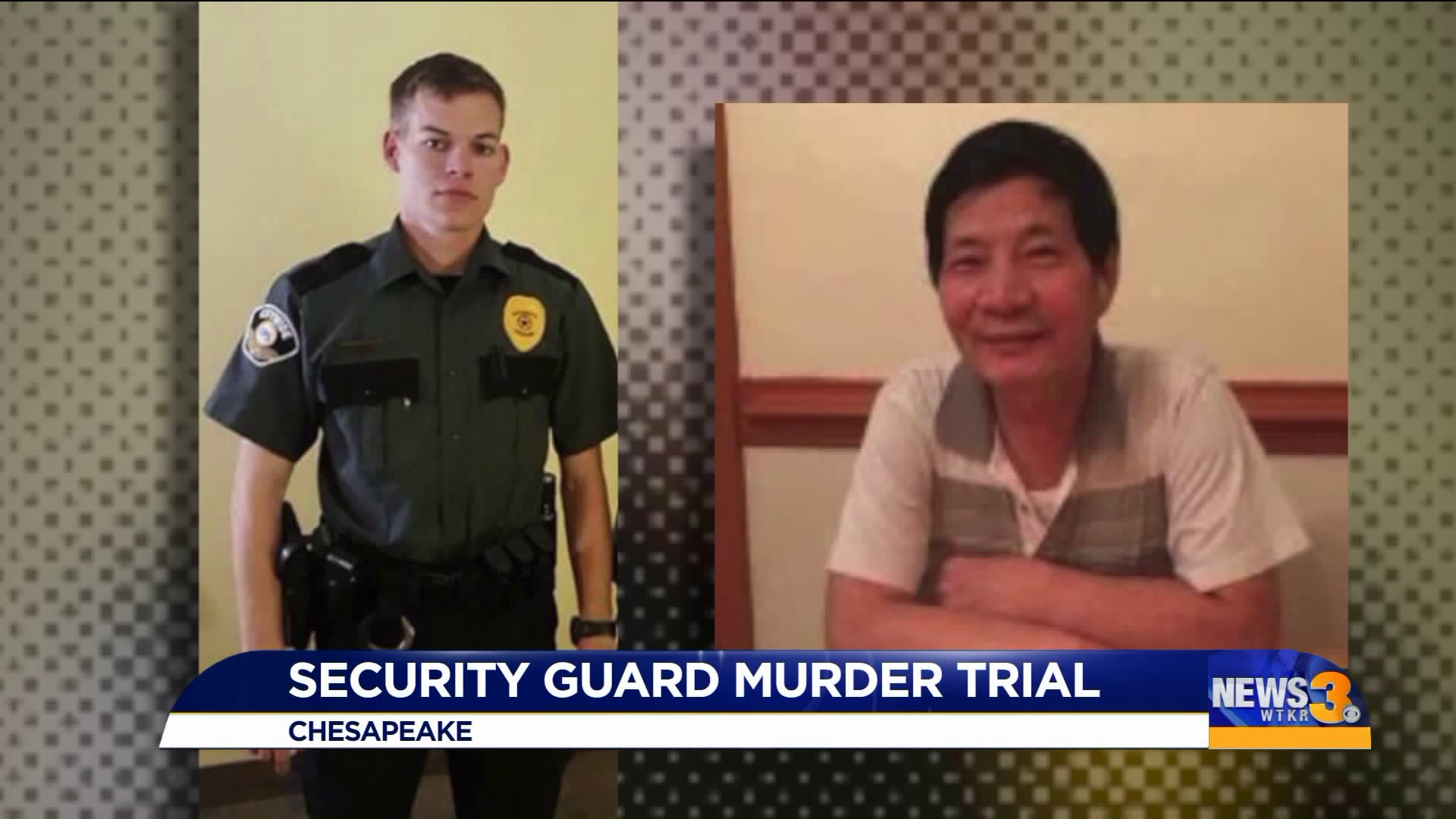 CHESAPEAKE, Va. - Thursday marked the first day of evidence being presented to the jury in a 2017 Chesapeake murder case in which a 60-year-old Chesapeake man was shot by an armed security guard.

Both the attorney for defendant Johnathan Cromwell and the Commonwealth's Attorney's Office made opening statements telling the jury what they intend to prove in the case.

Investigators said Cromwell was working as armed security in the Riverwalk neighborhood the night of January 26, 2017. Evidence presented shows Cromwell was patrolling the area when he shot at 60-year-old Jiansheng Chen, who was reportedly driving in the area at the same time.

Chen was on private property and Cromwell's attorney, Andrew Sacks, said Chen had been cited 10 days earlier for being on the property and was instructed not to return. Evidence shows Chen was in the same blue van he had been seen in before, by the defendant, when contact was cited for trespassing.

Prosecutors submitted evidence that 10 shots were fired that night, striking the van the victim was in as well as the victim's upper arm and chest area. Five bullets hit the victim, according to a medical examiner who said she physically removed them from Chen's body during the autopsy.

The bullets, according to her report, struck Chen in the upper left arm and upper chest area. The victim also had cuts or abrasions consistent with being hit by shattered glass.

In surveillance video taken from a camera across the street, the jury could hear audio of a car engine, then someone yelling, "Stop! Stop! Stop the car!" The car can still be heard, followed by several gunshots.

Shortly after, in the same video, the audience and jury heard the same voice saying, "Put the car in park," and, "Grab my med bag." A few minutes later, police are seen arriving at the location.

Body camera footage from a Chesapeake Police officer who responded to the scene shows the initial interaction with Cromwell. In the video, Cromwell states, "He [the victim] was driving his car at me."

The officer on the stand testified that Cromwell was cooperative and stayed on the scene. A homicide detective that came out to investigate the shooting did a recorded interview with Cromwell where he once again said the driver was coming at him and he was in front of the vehicle, afraid of being hit, so he fired.

The detective started to make remarks about that question in court on Friday but defense attorney Andrew Sacks objected saying the jury may be swayed by his opinion if he gave it relating to this specific comments.

Jurors also heard from a forensic firearms specialist who spoke about the 9 mm gun that was used, and the bullets inside the gun.

Prosecutors addressed the jury initially to say Chen was playing Pokémon Go in the clubhouse area and they are trying to prove Cromwell fired at the victim through the side of the van - not the front where Cromwell said he was standing - in the line of the vehicle.

In court, a forensic tech testified that the Pokémon Go app was not the open app on the victim's phone once she unlocked it. She said a text/call log showed up and she had to open the Pokémon Go app to find the history of the game. The last recorded activity was at 11:06 p.m. on the night in question. We know the shooting happened shortly after that, but it is unclear if it was a minute or several minutes.

Cromwell's attorney attests the victim's car moved and all the pictures and video shown in court was taken after the vehicle had rolled, following the shots.

The prosecution team intends to prove Cromwell used a gun excessively, committing first degree murder. Sacks said his client did not want to fire his gun, especially not that many times, but did so in self-defense.

Two Chesapeake Police officers, a woman who used to live across from the Riverwalk Clubhouse and a forensic tech all testified on Thursday about the evidence surrounding the who, what, when and where of the alleged crime.

Commonwealth's Attorney DJ Hansen said their case will take two days to put on, but one of their witnesses will not arrive until Monday.

The trial is scheduled to fill up the docket all next week.

Cromwell appears in court every day wearing headphones as he has mentioned he is having trouble hearing the proceedings.