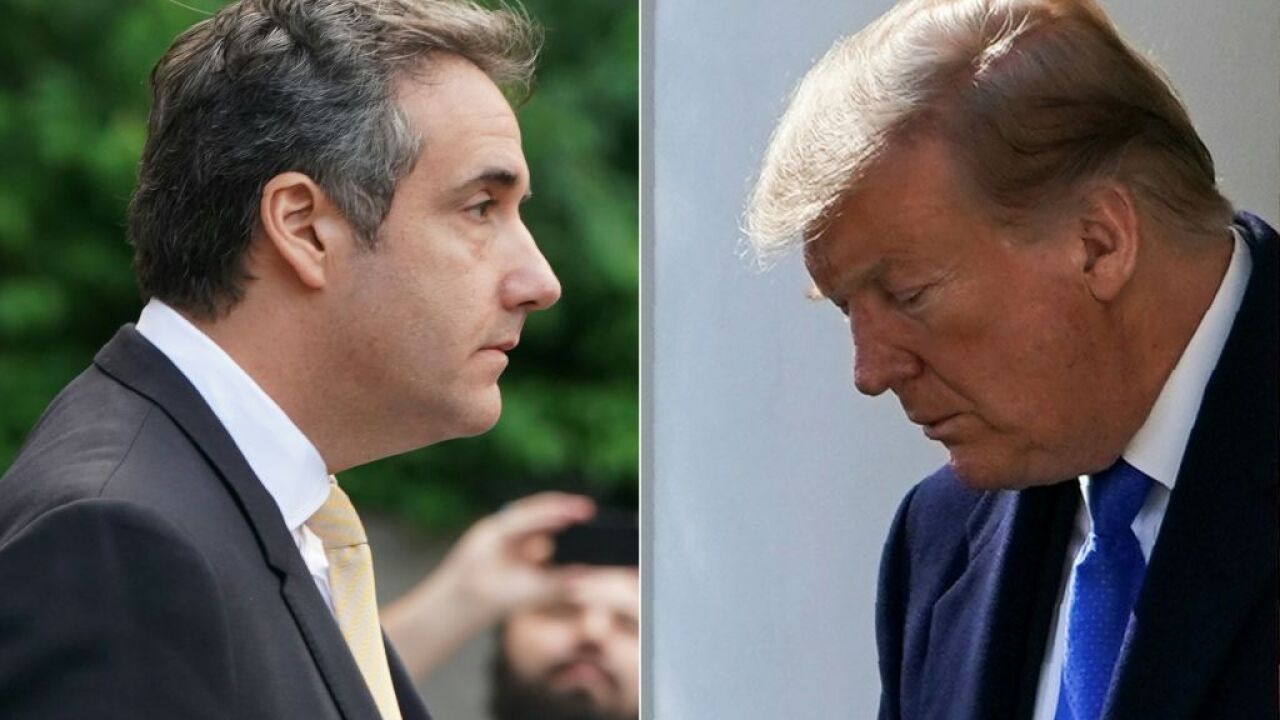 (COMBO) This combination of pictures created on February 26, 2019 shows Michael Cohen (L), former personal lawyer for US President Donald Trump, leaving federal court on August 21, 2018, in New York and US President Donald Trump (R) arriving to deliver remarks in the Rose Garden at the White House in Washington, DC on February 15, 2019. – Donald Trump’s former personal lawyer and fixer Michael Cohen will tell Congress Wednesday February 27, 2019 that the president is a “racist” and “conman” and knew in advance that WikiLeaks would publish dirt on Hillary Clinton, US media reported. (Photos by Don Emmert and Brendan SMIALOWSKI / AFP) (Photo credit should read DON EMMERT,BRENDAN SMIALOWSKI/AFP/Getty Images)

Cohen will accuse Trump in a congressional hearing of being a racist and a conman in testimony that will offer a rare televised glimpse into the cloud of scandals that have haunted Trump’s presidency.

According to testimony released ahead of his appearance, Cohen will say Trump knew that his former political adviser Roger Stone was aware of pending releases of stolen emails intended to damage Hillary Cinton’s presidential campaign.

The disclosure will revive speculation that the President colluded with representatives of Russia to interfere in the 2016 election, which evolved into an effort by Moscow to help Trump win in his duel against Clinton. 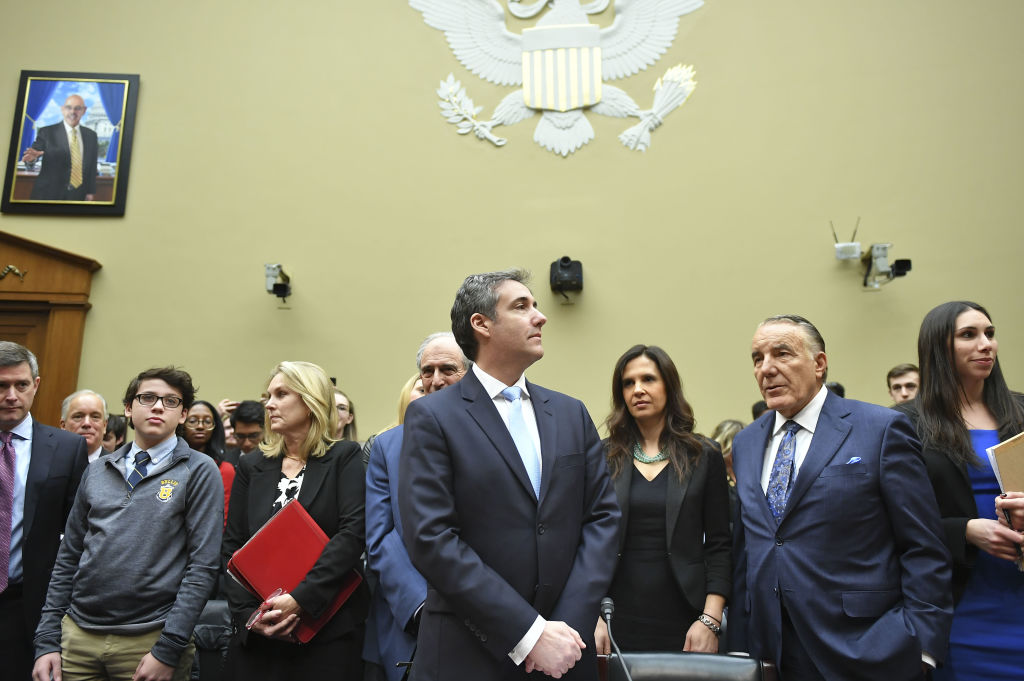 Cohen’s allegations, if true, would amount to the first time anyone with direct knowledge of the situation has said the President had advance knowledge of the WikiLeaks dump of Clinton emails.

Trump has said all along that there was “no collusion” between his campaign and Russia in 2016.

And the President provided an early rebuttal to Cohen’s testimony, tweeting from Hanoi just two hours before he is slated to meet Kim Jong Un one-on-one to kick off their second nuclear summit.

“Michael Cohen was one of many lawyers who represented me (unfortunately),” Trump tweeted. “He had other clients also. He was just disbarred by the State Supreme Court for lying & fraud. He did bad things unrelated to Trump. He is lying in order to reduce his prison time. Using Crooked’s lawyer!”

Cohen’s Wednesday appearance before the House Oversight Committee promises a look into the foundation of the concurrent scandals that have mostly been pursued by special counsel Robert Mueller, who has run an unusually leak-proof investigation by Washington standards.

Cohen’s quest for retribution has the potential to be a pivotal development in Trump’s term and will certainly be the most suspenseful public moment yet in the swirl of scandals afflicting the President.

Adding to the intrigue, Trump will be watching 12 time zones away in the middle of the night in his hotel in communist Vietnam, the setting for his summit with North Korea’s tyrant leader.

Cohen, who served for years as Trump’s legal “fixer,” plans to offer behind-the-scenes details of Trump’s business practices and events that went on during his presidential campaign, a source told CNN’s Gloria Borger on Tuesday.

He may also provide documents to back up his claims, the source said, an important consideration since Trump’s Republican allies will seek to impugn Cohen’s credibility given that he has already pleaded guilty to lying to Congress, along with tax and fraud charges.

Tuesday’s hearing will likely raise a flurry of questions that will go far beyond Cohen’s trustworthiness as a witness. It could test Trump’s unmatched ability to slide past scandals that would doom any normal politician. And it may offer hints at the extent of the information Cohen has already given to prosecutors. The hearing could potentially also allow fresh assessments of steps, up to and possibly including an impeachment investigation, that Democrats could take against Trump in future.

Democratic Rep. Jackie Speier of California believes that Cohen’s life-changing decision to split with Trump and to take responsibility for his own financial crimes lends credibility to testimony that Cohen’s lawyer has promised will be “chilling.”

“I think he’s going to be pretty pure in terms of his responses, and I think there will be people who are implicated as a result of his testimony,” Speier, who will be one of the lawmakers questioning Cohen, told CNN’s Brianna Keilar on Tuesday.

White House press secretary Sarah Sanders preceded Trump in launching a pre-emptive strike against Cohen, saying he should not be believed in anything he says.

“Disgraced felon Michael Cohen is going to prison for lying to Congress and making other false statements,” Sanders said in a statement.

“Sadly, he will go before Congress this week and we can expect more of the same. It’s laughable that anyone would take a convicted liar like Cohen at his word, and pathetic to see him given yet another opportunity to spread his lies.”

Those entrenched views could serve to limit the political impact of the revelations from Cohen. It seems unlikely, after all, that many Americans have yet to make up their minds about the President’s character and personal conduct. Trump has been in the public eye for decades and has used his notoriety and lack of contrition as a political weapon.

But the deepest peril for Trump may lie in whether his former fixer implicates him in any legal transgressions before he was a politician, during his campaign or even while he was President, before the two became estranged. Trump is already facing scrutiny in a long list of civil and criminal prosecutions into his business, campaign, transition, inauguration and presidency.

Cohen has already admitted to paying hush money to two women who claimed they had affairs with Trump. He said he acted at the then-Republican nominee’s direction, in contravention of campaign finance laws.

It is not clear whether Mueller or New York prosecutors with whom Cohen is cooperating have asked him to avoid any specific questions or issues that could influence their investigations.

Sources told CNN that Cohen apologized for lying in a private hearing with the Senate Intelligence Committee on Tuesday. Republican Sen. Susan Collins of Maine said the formerly bombastic lawyer came across as a “very different guy” during his appearance.

Cohen’s demeanor could be crucial to his hopes of overcoming suspicions about his motives in the committee and as to whether the claims he will make about the President can be believed.

Will he appear contrite and humbled in a way that will make his split with Trump and vow to clean up his own life convincing? Or will he come across as a crook seeking vengeance?

His handling of cross-examination will also be important: If he snaps back at Republicans, who are sure to goad him, he could undermine his testimony.

Another key question is whether Cohen will be able to provide documentary evidence about the accusations he will level against the President.

Television viewers in Washington — and Hanoi — will also be watching to see whether he adds any dimensions to the controversies swamping Trump or opens new areas of investigation for the committee.

He will surely be asked whether Trump asked him to lie to Congress before his previous congressional appearances. Such a request could theoretically rise to the level of an impeachable offense.

Cohen is also expected to weigh in on whether he feels threatened by tweets and comments by the President — who has called him a “rat” — and supporters, after canceling a previous appointment to deliver witness testimony in public, saying he feared for his family’s safety.

On Tuesday, one Trump ally, Rep. Matt Gaetz of Florida, tweeted: “Do your wife & father-in-law know about your girlfriends? Maybe tonight would be a good time for that chat. I wonder if she’ll remain faithful when you’re in prison. She’s about to learn a lot…”

Democrats will likely probe Cohen for details of hush payments made to adult-film actress Stormy Daniels and Playboy model Karen McDougal. He may be asked whether any other women got similar treatment.

Democrats will want to know whether he was offered a pardon in return for his silence about these and other matters, as they seek evidence that the President sought to obstruct various probes into his conduct.

Cohen is also expected to talk about Trump’s ambitions to build a luxury office and residential tower in Moscow, which court filings now show went on well into an election campaign in which the Russian government has been accused of interfering to help him win.

The committee’s Democratic leadership said in a statement last week that Cohen would provide details of “potentially fraudulent or inappropriate practices by the Trump Foundation” — the subject of a civil lawsuit brought by the New York Attorney General’s Office.

The issue of Cohen’s alleged travel abroad during the campaign could also intrigue Democrats seeking evidence of any meetings with Russian contacts.

Republicans on the committee are certain to seek to unhinge Cohen during what is expected to be a tortuously long day of testimony.

In a statement last week, Rep. Jim Jordan of Ohio, the top Republican on the Oversight Committee, blasted Cohen as bent on avenging “his grudge with the president” and hoping to “feed his insatiable desire for celebrity while being a patsy for political aims of the far left.”

Jordan, one of Trump’s closest congressional allies, and his colleagues may try to turn the hearing into a circus that could obscure the impact of Cohen’s claims.

Democrats, led by committee Chairman Elijah Cummings of Maryland, therefore face pressure to deliver sharp, targeted questioning and to avoid the impression that House hearings, especially, are nothing but a partisan bear pit.

Washington polarization has splintered the custom that politics should stop at the water’s edge and everyone should line up behind a President when he is on critical national security business abroad.

Still, the Democrats are playing hardball by not rescheduling the Cohen hearings for after Trump gets home, though given his penchant for inflammatory tweets and media skills, the notion that he will not be able to defend himself is not credible.

It is unclear how Trump will react to the testimony.

But CNN’s Pamela Brown reported on Tuesday that aides expected him to stay up late in Hanoi to watch, and a team will be following Cohen’s every word in the White House as the administration plots its counterattack.

Cohen’s appearance will take place hours after Trump meets Kim for the first time since their summit in Singapore last year. And it will play out ahead of the formal portion of their crucial nuclear diplomacy in Vietnam.

The stagecraft of the summit and the gravity of the issues could offer Trump an opening to create a dramatic, historic gesture toward Kim that would be partly aimed at distracting attention from the spectacle back in Washington.

But there is always the chance that Cohen’s appearance will be so dramatic that there will be nothing the President can do to change the subject. Cohen, after all, has made it clear that he plans to damage his former client beyond repair.