How sweet it is: Christoper Newport men and women’s hoops teams advance to DIII Sweet 16 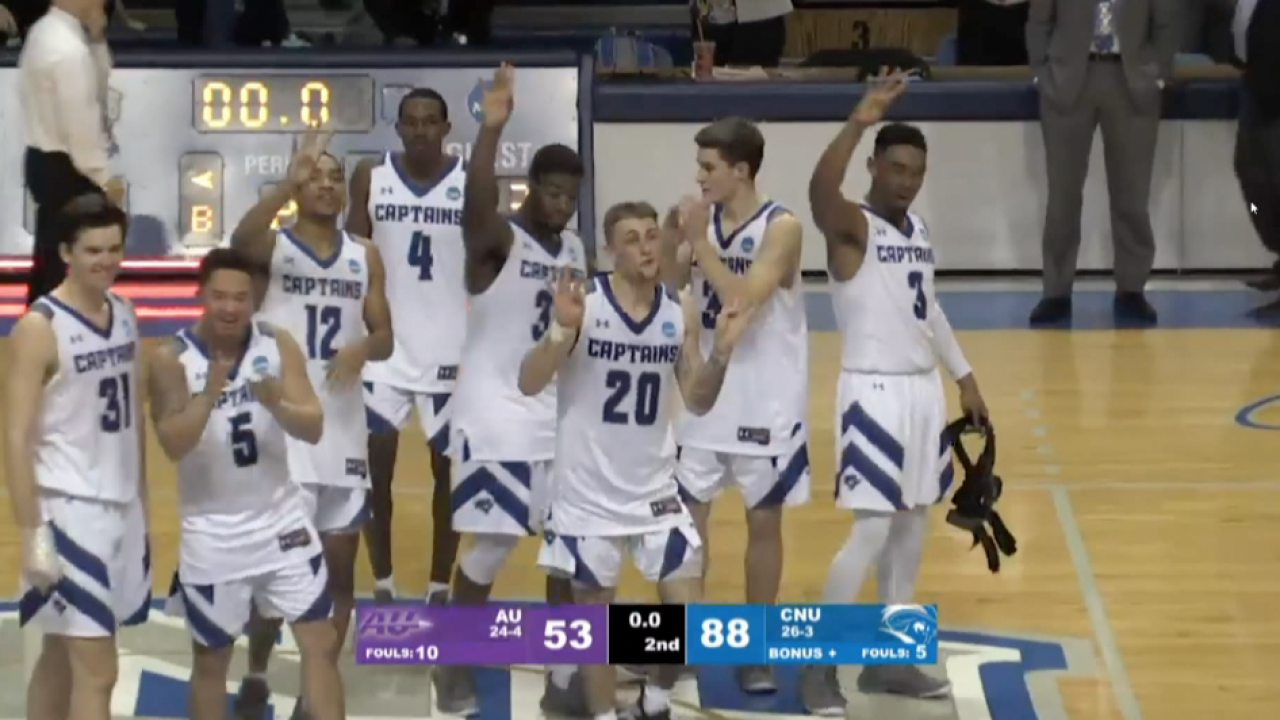 NEWPORT NEWS, Va. (CNUSports.com) – Christopher Newport jumped to an early lead and never looked back Saturday night, beating Alfred University (NY), 88-53, at the Freeman Center in the second round of the NCAA Men’s Basketball Championship.

The Captains, now 27-3 and ranked ninth in the nation, have won 11 straight games and are heading to the Sweet 16 of the tournament for the eighth time in program history.

“I’m so happy for this group,” Head Coach John Krikorian said. “They’ve got a really good work ethic and really get after it. The start of the game was what determined the outcome…we shot so well we were able to open up the lead and then maintain in the second half. We beat a really good team in Alfred, that’s for sure.”

CNU will play Hamilton College (NY) next Friday at a site to be determined by the NCAA. The Continentals defeated Moravian to advance Saturday night, 83-72. Hamilton, located in Clinton, NY, is 25-4 and ranked tenth in the nation. It will be the first meeting ever of the schools.

Christopher Newport drained 16 three-pointers Saturday night, 12 in the opening half, and ended up 16 of 34 (47 percent) from behind the line. The Captains never trailed in the first meeting ever of the schools, and jumped to a 22-5 lead to start the game. CNU later went up by as many as 28 in the opening half, 44-16, and held a 49-26 advantage at the intermission. The Captains then out-scored the Saxons in the second half, 39-27, to coast to the 35-point victory.

Three others reached double digits, led by sophomore Jason Aigner’s 17 points. Aigner made five of 11 from three-point range, and has now recorded 113 triples this year, matching former Captain Jermaine Woods in 2001-02 for most in a single season in program history.

Sophomore Adrian Beasley (16 points and a career-high 16 rebounds) and junior Cutch Ellis (11 points and ten rebounds) both tallied double-doubles as the Captains improved to 18-0 at the Freeman Center this year. Christopher Newport is now 23-0 when leading at halftime.

The Captains out-rebounded the Saxons, 49-30, and CNU’s stellar defense held Alfred to just 34 percent shooting for the night (22 of 64). Christopher Newport is fourth in the country in field goal percentage defense.

The 35-point win is the second-biggest in NCAA history for the Captains, who won by 36 over Morrisville State two seasons ago, 81-45. The triumph snapped a 14-game Alfred winning streak, and the Saxons finish the season with a 24-5 record.

Senior Dom LeMorta, who set a Freeman Center record by scoring 45 points Friday in Alfred’s victory over Ramapo, led the Saxons again on Saturday with a 28-point performance. LeMorta, who scored 20 of his 28 in the second half, went over the 1,000-point mark  in his final collegiate game.

Christopher Newport’s 27-win total is now tied for third all-time in the 52-year history of the program. The Captains set a school mark for victories by going 30-2 in the 2015-16 season that saw them advance to the Final Four.

The NCAA is expected to announce the location of next weekend’s action on Sunday. CNUsports.com will have the news as soon as it is available.

As they have time and time again this season, the Christopher Newport women’s basketball team paired a suffocating defensive performance with a high-paced, balanced attack as they downed Mount Saint Mary College (23-6) in the second round of the NCAA Division III Women’s Basketball Championship, 79-52.

The Captains improved to 25-5 after pulling away from the Knights to earn the program’s fourth straight trip to the NCAA Sectional Semifinals.

Christopher Newport will face 9th-ranked Scranton in next weekend’s sectional semifinal round. The two teams matched up in the Round of 16 during the 2016 version of the postseason event when the Royals were ranked No. 3 in the country.

Game time, location and more will be announced by the NCAA later this evening. More information will be available at CNUsports.com as it is made available.