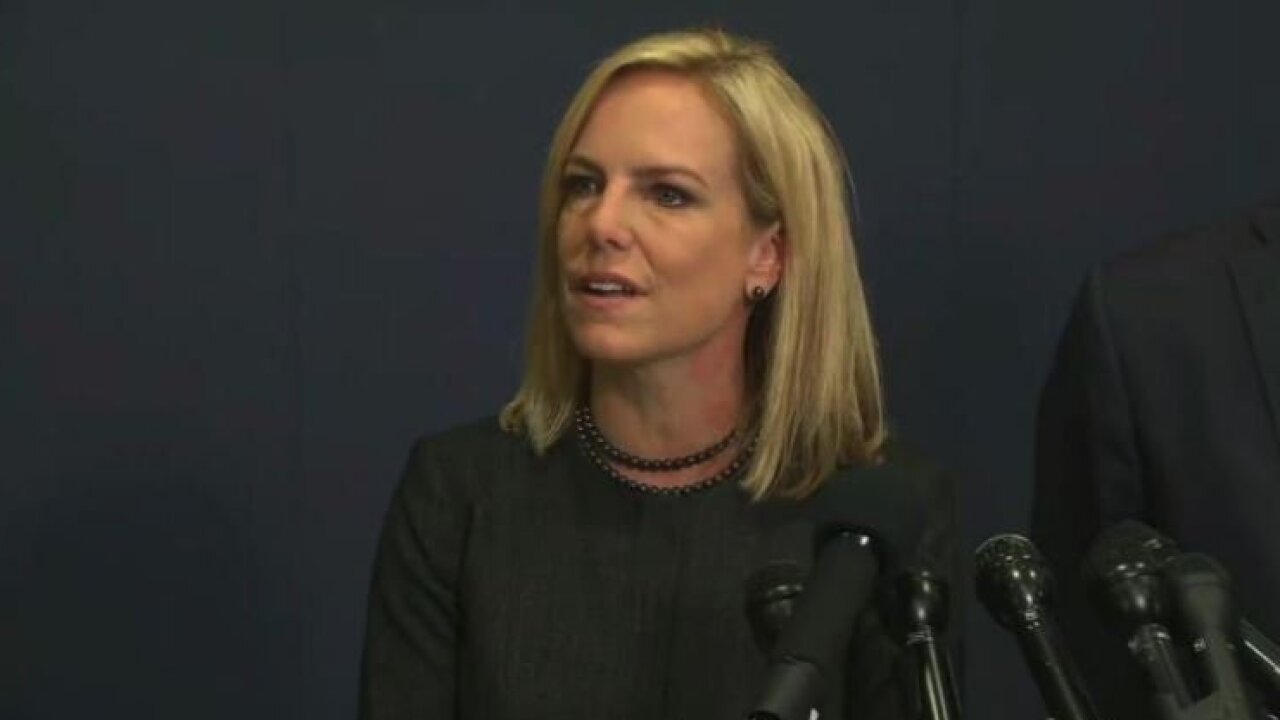 Homeland Security Secretary Kirstjen Nielsen said the US intelligence community does “consistently observe malicious cyber activity from various actors against US election infrastructure,” according to prepared remarks released by the department.

Homeland Security Secretary Kirstjen Nielsen on Wednesday will become the highest Trump administration official yet this year to testify on the administration’s immigration policies.

Homeland Security Secretary Kirstjen Nielsen said the US intelligence community does “consistently observe malicious cyber activity from various actors against US election infrastructure,” according to prepared remarks released by the department.

Nielsen, who assumed the post in December 2017, is appearing before the House Homeland Security Committee for a hearing on border security, which encompasses President Donald Trump’s national emergency declaration, the border wall and the administration’s “zero tolerance” immigration policy, which resulted in thousands of migrant children being separated from their undocumented parents.

It’s expected to be contentious, as Democratic lawmakers could hammer the secretary over the controversial policies and denounce the President’s declaration, which they’ve already voted to terminate in a resolution that’s now being considered by the Senate.

On all those fronts, Nielsen’s responses will be illuminating, particularly after months of speculation that the secretary would step down or be fired. Last year, Trump lashed out at Nielsen as border apprehensions increased, but eventually he warmed to her.

Nielsen is at the core of the heated debate over Trump’s signature border wall, which led to the longest government shutdown in US history earlier this year and, most recently, the national emergency declaration. Nielsen has defended the President’s declaration and will likely draw on recent data to back up the need for additional resources.

On Tuesday, Customs and Border Protection officials announced that more than 76,000 people had been apprehended crossing illegally or without proper papers in February, the highest number of “encounters” in any February in the last 12 years. Of the 76,000, 7,250 were unaccompanied children and 40,385 were people who came with family members.

In February alone, 36,174 family members and 6,825 unaccompanied children were apprehended, according to agency data.

Families and unaccompanied children make up more than 60% of apprehensions along the Southwest border. They’re predominantly from Guatemala, Honduras and El Salvador.

This, combined with an influx of groups of over 100 people illegally crossing the border, has presented a unique challenge to CBP. In previous years, the agency dealt primarily with single adults from Mexico who could be quickly returned. But because most crossing now are family members from the Northern Triangle countries, the US does not have the infrastructure to accommodate the influx.

The administration thus far has relied on deterrence to stem the flow of migrants, through policies like “zero tolerance” and the so-called Migrant Protection Protocols, informally known as “Remain in Mexico.” Nielsen could be called to answer questions on both of those policies.

The administration’s newest policy, “Remain in Mexico” requires some asylum seekers to await their immigration court hearings in that country. The US began to implement the policy at the San Ysidro border crossing and plans to expand it to other locations along the border. A coalition of immigrant advocacy groups has asked a federal judge for a restraining order that would block the program.

Similarly, the latest revelations about the administration’s “zero tolerance” policy that led to family separation could lend themselves to some testy exchanges. Government reports have painted a picture of chaos and confusion since the policy ended last year. In January, a Health and Human Services Department inspector general report that found thousands more children had been separated than previously acknowledged.

In the end, the questions could span the gamut Wednesday, as Democrats use the opportunity to question the secretary. For example, while the focus is on border security, lawmakers could also ask about the Transportation Security Administration, which is still reeling from the government shutdown, and the Federal Emergency Management Agency, whose leader has announced he’s retiring.

Whatever the case, the Democrats are sure to use their newfound power to grill the secretary and seek answers to questions that have long been lingering over the Trump administration.