School administrators said the calls were in relation to an incident last week in which a para-educator was seen shoving a Donald Trump flag down a student’s shirt.

As a precaution, the school immediately put a modified lockdown in place and cancelled all after-school activities.

The school is working closely with the York-Poquoson Sheriff’s Office as authorities investigate the phone calls. The sheriff’s office provided additional deputies at Tabb High Wednesday for extra security. Additional deputies will also be on site Thursday as well as a precaution and reassurance to families, the school division said.

When the district became aware of the video, administrators reiterated that school board policy says that school time and school property should not be used for any political purposes. Policy also says employees are expected to refrain from engaging in any activity that supports or opposes a candidate or political party while on duty, while on school property during school hours or while representing the school division.

The school division is encouraging families to talk about the importance of reporting concerns and the dangers of using social media to spread rumors and misinformation.

On May 5, a grand jury indicted Robert Michael Scott of Florida on two counts of Threat to Injure in Interstate Communication, saying he left two separate messages that contained a threat to injure the educator involved in the incident.

According to the indictment, Scott began the voicemail with, “Uh yeah, I’m just here calling in… in regards to the video with the, uh, the n***** teacher, that took the Trump flag and wrapped it around this kid’s face.”

Court documents say he left the messages “for the purpose of issuing a threat, and with knowledge that the communication would be viewed as a threat.” 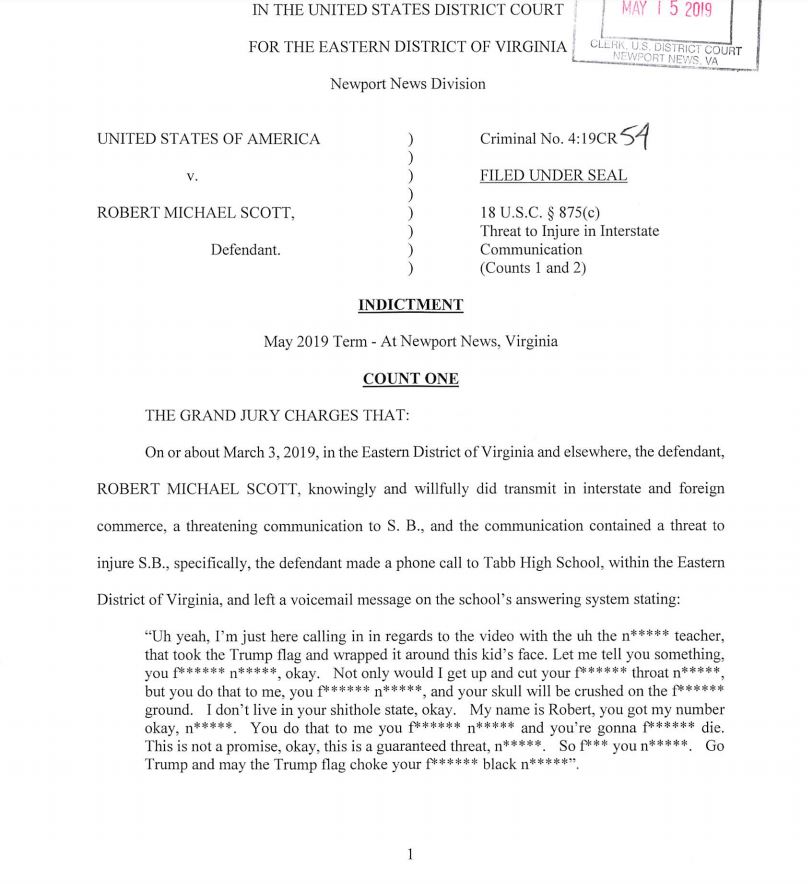