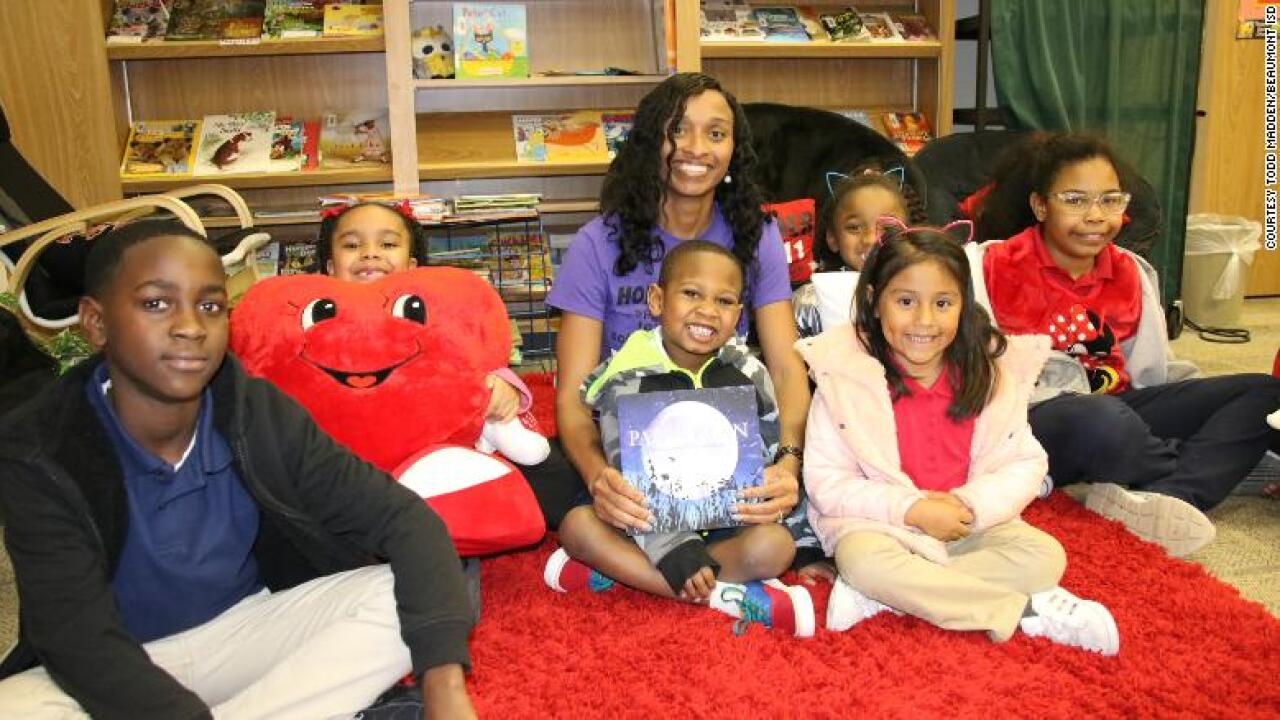 42-year-old elementary school principal Belinda George says she got her love of reading from her school librarian. Now she’s passing it along to her students.

It’s a Tuesday night in Beaumont, Texas, and elementary school principal Belinda George is wearing a onesie with a unicorn head.

She sits in front of her home’s cozy fireplace, goes live on her iPhone and begins reading a bedtime story.

Her “scholars,” as she calls them, have tuned in live for “Tucked-in Tuesdays,” in which their principal’s acted-out bedtime stories get streamed straight to their parents’ phones and computers.

Tonight, George is reading “Howie has a Stomachache” — about a pig with a problem.

“Can you imagine being a pig with a stomachache? That’s gotta be the worst,” the 42-year-old principal ad-libs between reading to the kids of Homer Drive Elementary.

George has been doing this every Tuesday night since December because she wants to raise her school’s low reading scores.

Last year, only 47 percent of her third grade, and 60 percent of her fourth grade class passed the state-mandated reading test. This is her first school year as principal, and she hopes to turn those numbers around.

And so, she reads stories.

One night, George wore a Cookie Monster onesie. Another, she wore one covered with pink hearts.

42-year-old elementary school principal Belinda George says she got her love of reading from her school librarian. Now she’s passing it along to her students.

She gives shout-outs to each child as they log-in to watch.

“Being familiar with their reading can make a connection. I try to cover different interests. If kids can’t relate, they don’t read.

“They watch me read with emotion and make the book come alive. That’s my thing. Making them feel whatever the book is trying to make you feel.”

And the pajamas don’t hurt.

“It’s a matter of just relating to the kids. It’s just a conversation piece. ‘I like your pajamas,’ the kids say. They want to tune in to see what I’m wearing.”

The kids get “accelerated reading” points every time they read a book — part of a national program.

Students who tune in to the live reading are also eligible for accelerated reading points if they take a corresponding quiz.

George gives the winner a limo ride. Second place gets to hang out with the principal for the day. She’s very popular, so it’s a real motivator.

Her father didn’t know how to read

George picked up her love for reading in Louisiana from her school librarian who would read to the children on a rocking chair in front of a large Winnie the Pooh scene — “the whole 100 acres made of felt.”

She would act out the characters with zest just like Principal George.

George grew up with five sisters in a three-bedroom trailer.

“The pecking order of the bedroom situation varied,” she laughed.

Her father dropped out of school when he was in the fifth grade and never learned to read. Her mother left school in eleventh grade.

“My parents were extremely smart people so I didn’t realize my dad couldn’t read until I was much older,” said George.

It’s having an effect

Fifth-grader Trevor Green never liked to read books — until he started tuning in, his grandmother and guardian told CNN.

“It’s something that keeps them off of the video games, and YouTube — I think it was a great idea,” said Tiffany Savoy.

Now, his grandmother says, Trevor goes to the library every week to check out at least a couple of books. He especially likes nonfiction, like the book, “Why Do Animals Hide?”

George read it on a recent Tucked-In Tuesday and brought a prop: her pet turtle Frannie.

“She was hiding in her shell at first. Then she was just climbing on my PJ’s,” George said. “I guess she knew she was getting her 15 minutes of fame.”

It forms a relationship

George does not have children. She considers her scholars her family and wants the kids to be successful in life.

George says reading can be difficult for some of the kids. And so, they choose not to.

Just getting them to listen to somebody read acts as a form of modeling: to get them to read, she says.

So far, she says, it seems to be working.

More kids are asking to take reading quizzes for points, she says. And come April and May, when the kids take the state reading test again, she’s hoping to see the scores go up.

On another Tuesday night, Principal George reads “Ladybug Girl” to the kids as she cradles a ladybug pillow as a prop.

The book has a huge life lesson, she says — just like all the books she reads them.

“Ladybug girl’s brother told her she was too small for stuff,” she said.

Then she asked the kids: “Has anyone ever told you, you were too small for something? My big sister told me I was too small for stuff. But I did it anyway.”

Today she’s carrying out that life lesson — one onesie, and thriving scholar, at a time.