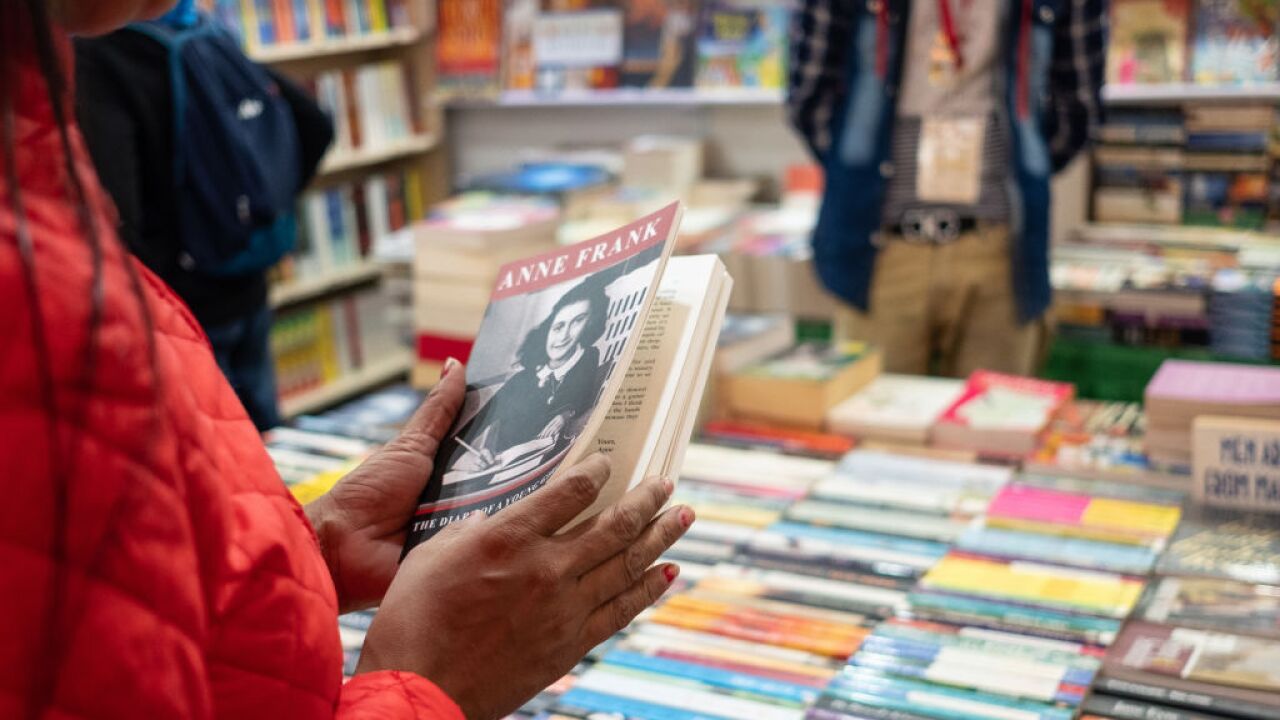 An Indian visitor picks up a copy of Anne Frank ‘The diary of a young girl’ at the 27th edition New Delhi Book Fair, one of Indias longest-running book fair, in New Delhi on January 5, 2019. (Photo by Laurène Becquart / AFP) (Photo credit should read LAURENE BECQUART/AFP/Getty Images)

Anne Frank’s stepsister has a message for teens celebrating with Nazi imagery and symbols: It is an insult to me and all who died in the Holocaust.

They should “stop it,” said Eva Schloss, 89, who hid from the Nazis with Anne in the same apartment block and was also imprisoned in a concentration camp.

Schloss went to Newport Beach, California, on Thursday to talk to students after some posted pictures on social media from a party where they laughed as they raised their arms in the Nazi salute next to a swastika made of plastic cups.

Captions on the image of the swastika read “German rage cage,” “German engineering” and a photo of a group chat labeled “master race” showed the comment: “phones gonna die. just like the jews.”

The photos generated outrage, and while some parents addressed the issue with their children, Schloss said she wanted to speak directly to the students to show how hurtful their actions were to millions.

“When I heard the incident here, I was shocked that, in 2019, in a well-educated town, in a very highly educated school, that incidents like this should still happen,” Schloss said.

“I was very keen and willing to come and speak and hear from the children themselves why they were able to do anything like that, being so, so hurtful to millions of other people.”

She was surprised to hear their answer: They didn’t know what their actions meant. Not the swastika. Not the Hitler salute.

At least one student from the school told the Los Angeles Times they had just learned about the Holocaust in school last month, at least in her history class, watching graphic videos of concentration camps like the one Schloss was in.

But Schloss said even if the lessons had been given, the children had not fully understood or internalized the horror of the camps that she survived and the broader Holocaust that killed 6 million Jews.

When she was their age, she was liberated only to find the Nazis had killed many of her relatives. And Anne Frank died before her 16th birthday.

She talked to students and their parents of the Nazi horrors — gassing Jewish people, targeting disabled people and their children.

She said she noticed “some had tears in their eyes. They didn’t realize the impact. They were very sorry.”

Hate in the classroom

Schloss spoke to the children in Newport Beach the same week that video emerged of teens in Hoover, Alabama, using the N-word and laughing about concentration camps saving the world from being run by Jews.

A 12-year-old boy was also recently arrested for drawing swastikas and “Hail Hitler” on a school playground in Queens, New York.

More than seven decades after Adolf Hitler’s death and the defeat of Nazi Germany, such uses of hateful symbols and rhetoric are on the rise, warned Anti-Defamation League CEO Jonathan Greenblatt.

Anti-Semitic incidents in K-12 schools rose 94% in 2017, after doubling the previous year, an ADL audit found.

“And elementary, middle and high schools exceeded public spaces as the locations with the most anti-Semitic incidents, surpassing homes, businesses and even Jewish institutions,” Greenblatt said.

While hateful and hurtful, the perpetrators may not have understood their impact.

“The students involved in these incidents are either ignorant to, or have a lack of understanding of the history of the Holocaust,” Greenblatt said.

As Schloss took it upon herself to educate students at Newport Beach, Greenblatt told CNN that the ADL is pushing for legislation at both the state and federal levels mandating Holocaust education. He said, “to date, only 11 states across the country currently have laws mandating Holocaust education, and those laws are inconsistently applied. A federal bill now under consideration will hopefully close those gaps.”

In California, a parent who asked to be anonymous shared with the Los Angeles Times letters of regret from students who had attended the party in Newport Beach.

The parent had collected the letters from students who had accepted an invitation to become more educated about the Holocaust by meeting with a scholar of the period in the parent’s home.

“My actions were disgusting, appalling, irresponsible,” one California student wrote. Another said, “we made a very big mistake.”

The parent also noted that some of the students at the party had declined the invitation to meet with the Holocaust scholar.

In Alabama, the father of one of the teens involved apologized on his company’s social media page, and attached a statement he said was from his daughter.

“The horrible, horrible things that I said were a terrible attempt to be funny,” her statement read. “I now know that trying to fit into a group by behaving poorly is an awful thing to do.”

It continued: “I spoke without thinking about what the words truly meant, and the words I chose are extremely hurtful.”

While the girl appeared to have been shocked into changing her behavior, the prevalence of Nazi imagery and ideology on social media can be desensitizing for others, said Brian Levin, director of the Center for the Study of Hate & Extremism at California State University.

“What disturbs me the most about some of these photos and videos is how relaxed these people are at parroting the most bigoted views that we used to see really parroted at places like skinhead rallies,” he told CNN.

The current divided political landscape will not help, he said. “What I saw was how the combination of ignorance, evil, shock and peer validation can come together at a time when the social political landscape is about othering and polarization. And what happens is there’s a race to the bottom because we don’t have civic moral leadership in this country that sets a standard as to what’s acceptable communally.”

Education in schools and communities could be a way to change it, he said, but that will take time.