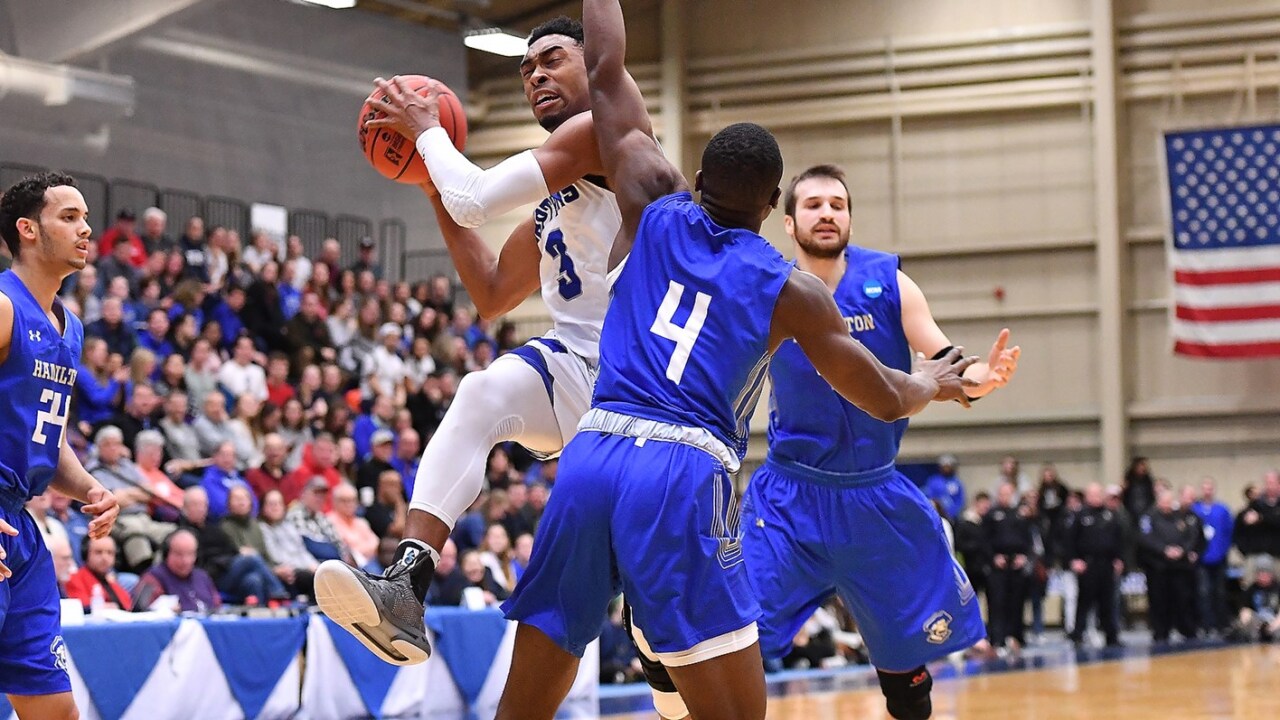 CLINTON, NY (CNUSports.com) – Christopher Newport used a 55-point second half outburst Friday night to oust host Hamilton College from the Division III Men’s Basketball Championship, 75-67. The victory at near-capacity Scott Field House was CNU’s 12th straight, and the 28-3 Captains will advance to the Elite Eight of the tournament for just the third time in program history. Christopher Newport will play 19th-ranked Williams College (23-6) Saturday night at 7:00 p.m. for the right to advance to the national semifinals next weekend in Fort Wayne, IN.

“We were just relentless on the boards in the second half, and you could see we were not going to let up,” Head Coach John Krikorian said. “We got some big stops in the final minutes and were able to finish the right way. Some of our guys really spoke up in the locker room at halftime, some who weren’t even playing, and that really inspired us. Sometimes coming from other guys makes more of an impact than coming from me.”

The Captains out-rebounded Hamilton, 54-35, and held a 16-8 edge on the offensive glass. Senior Marcus Carter and sophomore Jason Aigner led the way for the ninth-ranked Captains with 18 points each. Junior Cutch Ellis recorded a double-double with 12 points and and a career-high 17 rebounds.

CNU trailed for most of the first half and the Captains were hurt by 11 turnovers, one-of-ten three-point shooting, and seven-of-27 overall shooting (26 percent). Hamilton opened a 12-point lead at the intermission, 32-20, as the Continentals enjoyed a 24-10 run over the final minutes of the half.

Christopher Newport stormed back after halftime, cutting into the lead as Carter, who was held to two points in the first half, and Aigner, who had just three at the break, began hitting shot after shot. CNU finally jumped ahead, 42-41, with 12 minutes to play…the first lead for the Captains since an early 2-0 edge…and the Sweet 16 battle raged until the Captains opened the lead in the final minute, going ahead by as many as nine en route to the eight-point triumph.

CNU’s stingy defense held Hamilton to just 38.6 percent shooting for the night (27 of 70) and nine of 28 (32.1 percent) from beyond the three-point arc. The Captains turned the ball over only twice after halftime, and out-rebounded the Continentals in the second half, 29-16. Hamilton was led by senior Peter Hoffmann’s 19 points. The Continentals finished the season with a 25-5 overall record, and the game was the first-ever between the schools.

CNU’s other trips to the Elite Eight came in 2000-01, the first season of the Freeman Center, and in the 2015-16 campaign. The Captains lost to William Paterson in overtime in 2001, and beat Wooster (OH) in 2016 to advance to the Final Four for the only time in program history. Saturday’s game with Williams will be the first ever for CNU with the Ephs. Williams knocked off second-ranked Whitman, 84-81, in the opening game Friday night at Scott Field House. Whitman concluded the season with a 28-2 mark.

Carter’s 18 points give him 1,782 for his career, just 12 behind Tre Benefield for fifth place on CNU’s all-time scoring list. A crowd of 1,126 watched the Captains advance to play Saturday for the second straight night at Hamilton’s Scott Field House.