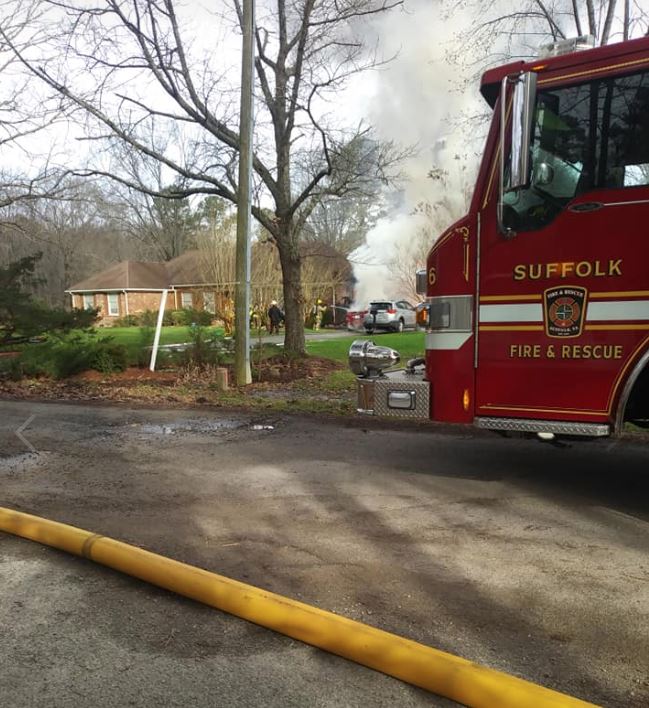 SUFFOLK, Va. – Firefighters responded to a large garage fire at a home in the 100 block of Five Mile Road around 9 a.m. Monday.

The call came in at 9:27 a.m., and the first units with Suffolk Fire & Rescue arrived on scene at 9:34 a.m. Upon arrival, crews found a large detached garage on fire. Two vehicles were inside the garage.

Crews began attacking the fire and called a mayday when a firefighter who was working between the garage and the home became trapped underneath the rubble after a wall collapsed.

Her fellow firefighters quickly rescued her, and she and another firefighter received emergency medical assessment and treatment before they were taken to Sentara Obici Hospital via ground for further treatment. One firefighter has been treated and released, while the second continues to be evaluated for her injuries.

Suffolk Fire & Rescue confirmed Tuesday that the firefighter who was injured when the wall collapsed on her is currently recovering at home but will require further medical follow-up.

One of the home’s female occupants also suffered a minor injury and received emergency medical assessment and treatment on scene before she was taken to the hospital for treatment. She has also been treated and released.

The American Red Cross is assisting the two adults who have been displaced as a result of the fire.

The cause of the fire remains undetermined. As the fire marshal’s office continues the investigation, authorities do not believe the fire was suspicious in nature.