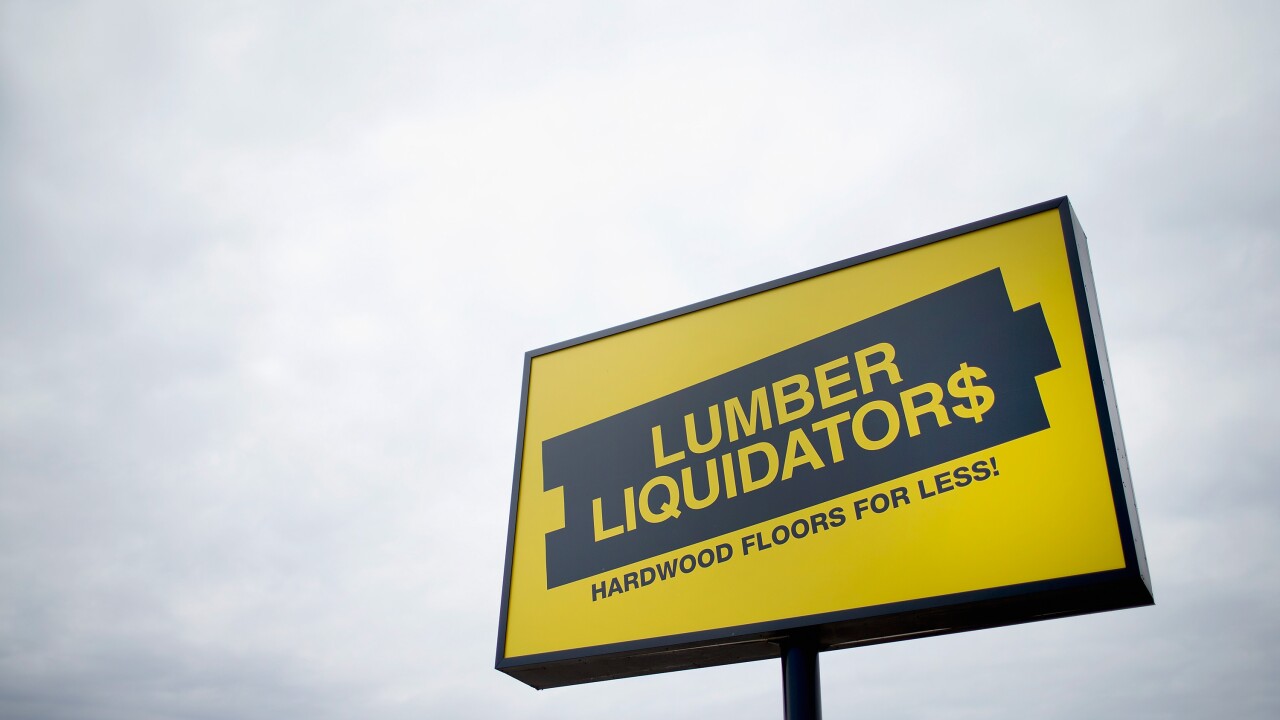 CICERO, IL – APRIL 29: A sign marks the location of a Lumber Liquidators store on April 29, 2015 in Cicero, Illinois. The U.S. Department of Justice is reported to be seeking criminal charges against Lumber Liquidators following an investigation over imported products. The television news program ”60 Minutes” recently reported that the company’s Chinese-made laminate flooring products had unsafe levels of formaldehyde, a known carcinogen. (Photo by Scott Olson/Getty Images)

TOANO, Va. – A Virginia-based retail company has agreed to a $33 million penalty for securities fraud.

Lumber Liquidators Holdings, Inc. agreed to the penalty for filing a materially false and misleading statement to investors about the sale of its laminate flooring from China to its customers in the United States.

Lumber Liquidators is a public corporation headquartered in Toano and one of the largest retailers of flooring products in the United States.

The company entered into a deferred prosecution agreement in connection with a criminal information filed on Tuesday charging the company with securities fraud.

“This resolution holds Lumber Liquidators accountable for misleading the investing public,” said G. Zachary Terwilliger, U.S. Attorney for the Eastern District of Virginia. “It also recognizes that the company has cooperated with the government’s investigation, completely replaced its senior executive team, and installed experienced executives who have displayed a commitment to building an ethical corporate culture. We will continue to ensure that market participants can trust information communicated by public companies when making investment decisions. My thanks to our prosecutorial team and our investigative partners for their outstanding work on this case.”

The case was mostly focused on Lumber Liquidators knowingly filing a false and misleading statement to investors broadly denying the allegations featured in a March 2015 episode of 60 Minutes, and affirming that the company complied with California Air Resources Board regulations.

“Lumber Liquidators lied to investors and to the public about its compliance with formaldehyde regulations for the flooring it sold – all to protect its stock price,” said Brian A. Benczkowski, Assistant Attorney General of the Justice Department’s Criminal Division. “False and misleading financial reports undermine the integrity of our securities markets and harm investors. The Department and our law enforcement partners are committed to doing everything we can to ensure that those who commit securities fraud are held accountable.”

Court documents filed as part of the DPA say that Lumber Liquidators was subject to various laws that regulated the chemicals used in wood products, including laminate flooring. Specifically, CARB enforced limits on formaldehyde emissions from composite wood products.

“This penalty should serve as a warning to other corporations who seek to mislead investors,” said David W. Archey, Special Agent in Charge of the FBI’s Richmond Field Office. “FBI Richmond is grateful for the commitment to this case of its partners at the U.S. Attorney’s Office, the Justice Department’s Fraud Section, IRS Criminal Investigations and the U.S. Postal Inspection Service.”

Foreign and domestic flooring suppliers alerted Lumber Liquidators of CARB compliance concerns related to the company’s Chinese laminate products in 2014. In February of that year, Lumber Liquidators’ Chinese laminate suppliers requested an increase in price citing concerns about the increased cost of CARB compliant cores and their ability to pass deconstructive testing for formaldehyde emissions.

“Lumber Liquidators knowingly deceived the shareholders they were entrusted to serve,” said Kelly R. Jackson, Special Agent in Charge of IRS-Criminal Investigation (IRS-CI) Washington, D.C. Field Office. “IRS-CI will continue to work diligently with our federal law enforcement partners to ensure that the punishment for such crimes matches the seriousness of the offense.”

Lumber Liquidators visited Supplier A again in September 2014 and January 2015. After those visits, Lumber Liquidators concluded that Supplier A had numerous record keeping anomalies, refused to implement CARB-related corrective action requests made by the company, and could not reliably demonstrate that its laminate flooring contained CARB compliant cores.

In January 2015, the company’s former senior management team decided to discontinue its relationship with Supplier A due to CARB compliance concerns. However, Lumber Liquidators ordered more laminate flooring from Supplier A that same day.

On March 1, 2015, 60 Minutes aired a segment alleging that laminate flooring sold by Lumber Liquidators in the United States did not meet CARB emission standards for formaldehyde. The episode featured the undercover videos and test results previously shown to Lumber Liquidators.

To be exact, Lumber Liquidators omitted material facts from investors, including: CARB’s investigation of the company’s Chinese laminate products; its own deconstructive test results; the company’s decision to discontinue sourcing from Supplier A due to CARB compliance concerns; and evidence that undermined the suppliers’ statements that all products provided to Lumber Liquidators were CARB compliant.

Complying with its agreement with the Department of Justice, Lumber Liquidators agreed to pay a total criminal penalty of $33 million to the United States, including a criminal fine of approximately $19 million, and approximately $14 million in forfeiture. This amount represents the company’s net profits from the sale of 100 percent of its Chinese laminate from on or about January 16, 2015 through on or about May 7, 2015.

Lumber Liquidators also agreed to implement rigorous internal controls and cooperate fully with the Department’s ongoing investigation, including its investigation of individuals. Under the DPA, prosecution of the company for securities fraud will be deferred for an initial period of three years to allow Lumber Liquidators to demonstrate good conduct.

The U.S. Securities and Exchange Commission (SEC) announced a separate settlement with Lumber Liquidators in connection with related parallel proceedings. Under the terms of its resolution with the SEC, Lumber Liquidators agreed to a total of $6,097,298.42 in disgorgement of profits and prejudgment interest.

The Department of Justice agreed to credit the amount paid to the SEC in disgorgement as part of its agreement. The combined total amount of criminal and regulatory penalties paid by Lumber Liquidators will be $33 million.

This penalty is meant to reflect the nature and seriousness of the conduct, as well as Lumber Liquidators’ ongoing cooperation with the United States and the company’s extensive efforts at remediation.

Among other remedial efforts, Lumber Liquidators suspended the sale of all laminate flooring from China in May 2015; offered consumers in-home testing for already installed flooring; and implemented new policies and procedures regarding compliance with California Air Resources Board (CARB) emission standards and other environmental regulations, sourcing of flooring products, financial reporting and internal controls. The employees involved in wrongdoing either were terminated or resigned from Lumber Liquidators, and the company replaced its executive management team with experienced executives who have displayed a commitment to building an ethical corporate culture.