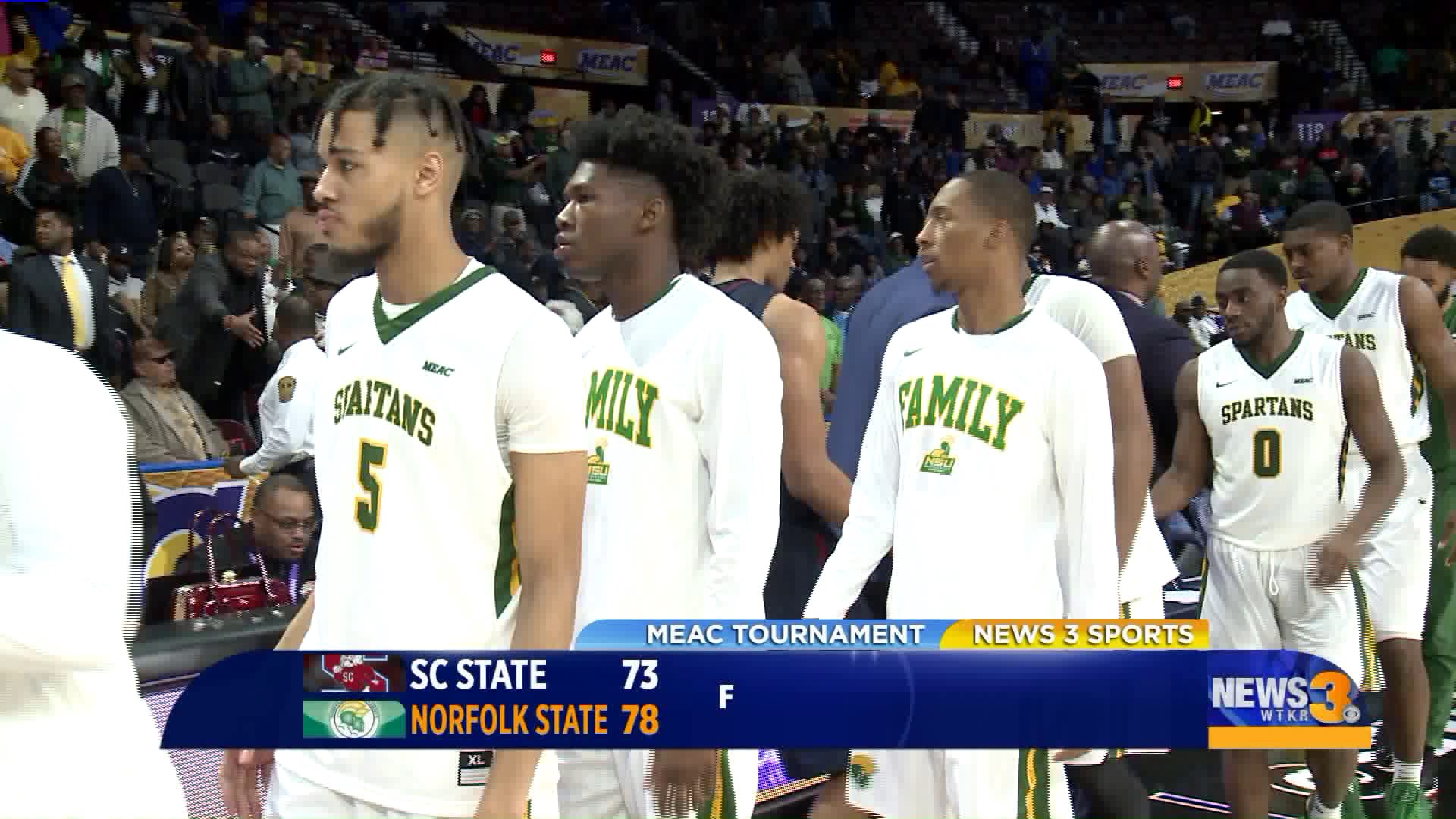 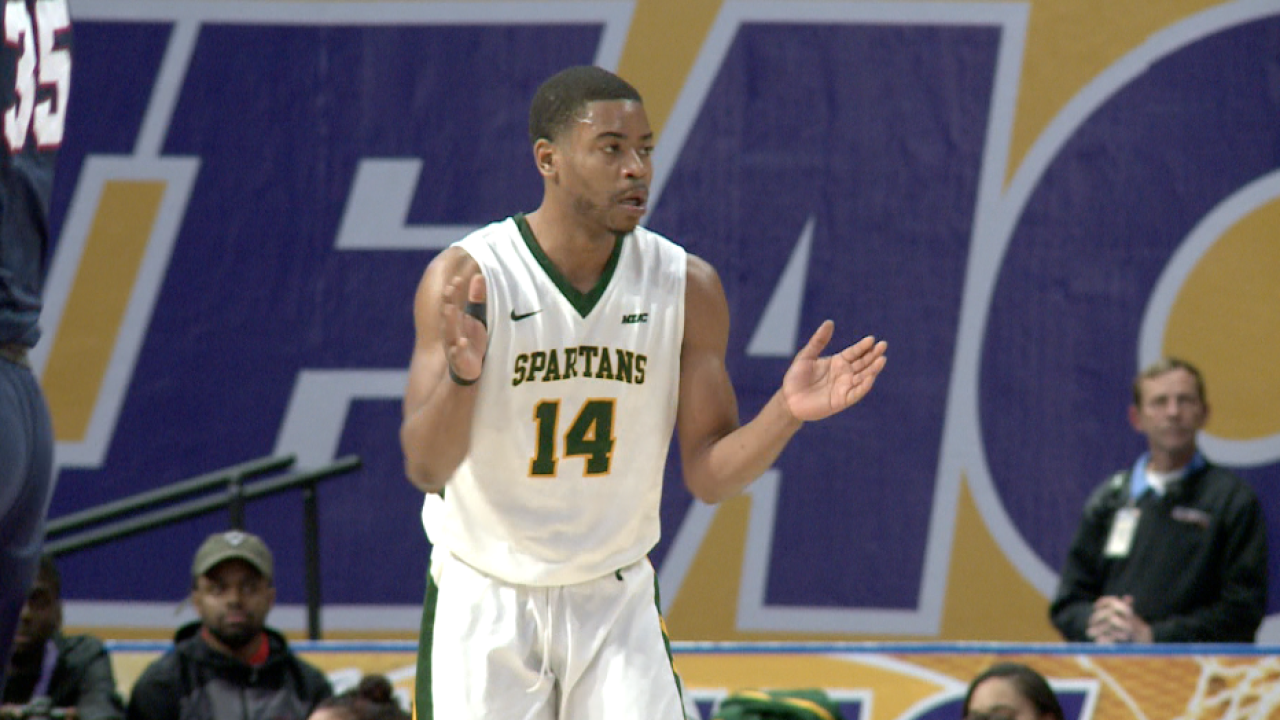 NORFOLK, Va. (NSUSpartans.com) -  Down 11 early in the second half, the Norfolk State men’s basketball team was not about to let history repeat itself on Wednesday evening in the MEAC tournament quarterfinal round at Scope Arena.

A tight second half turned NSU’s way late in the contest, and the No. 1 seed Spartans held on a for a 78-73 win over No. 9 seed South Carolina State.

Junior Nic Thomas led the Spartans with a career-high 30 points, none bigger than his 3-pointer with 25.7 seconds left in the contest. His shot several feet out from the right wing broke a 73-73 tie and gave NSU the lead for good.

The Spartans, down 11 early in the second half, led for the final 7:44 of the game but never by more than the final margin of five points in those last 20 minutes of play.

They ultimately outscored S.C. State by 13 in the second period.

With the win, NSU (20-12) advances to face either No. 4 seed Howard or No. 5 seed Bethune-Cookman in the semifinals on Friday at 6 p.m. HU and B-CU will play their quarterfinal game on Thursday night. The Spartans reached the 20-win plateau for the fourth time in their Division I history.

The game had shades of 2013, the only other time the Spartans were the No. 1 seed in the tournament. That season, the Spartans were upset in the quarterfinal round. And on Wednesday, the Bulldogs led by eight at the break, thanks in part to a 6-of-10 effort from beyond the arc. They missed all six of their 3-point attempts in the second half as NSU made its comeback.

S.C. State went ahead by 11 early in the second half. Senior Derrik Jamerson Jr. had a 3-pointer in addition to a 3-point play during a 10-2 run to cut the deficit to three with 14:21 left. His trey gave him the school’s D-I record for 3-pointers in a season with 80.

The Spartans eventually stretched the run to 16-4 to go ahead by one, still with more than half of the second period to go.

Thomas started making free throws – he was 11-of-14 for the game – including with 11:32 to go for the first of seven lead changes in four minutes of play. In a game that featured a combined 47 fouls, the Bulldogs also started hitting shots from the line. But after a layup by S.C. State’s Damani Applewhite with eight minutes to go, the Spartans took the lead for good.

Sophomore Mastadi Pitt nailed a short jumper to put the Spartans ahead by three with less than seven minutes left. NSU never led by more than three until Thomas made two from the free throw line with 2:14 on the clock for a 71-66 lead. Layups by Janai Raynor-Powell and Ian Kinard got the Bulldogs to within one twice with less than two minutes to go.

In between those two buckets, senior Alex Long had a key offensive rebound and putback hook shot with 1:12 left. Thomas’ late 3-pointer was followed by a Bulldog turnover, and Pitt made two more from the foul line for the final margin.

Pitt added 17 points in the win, hitting 7-of-8 from the foul line with seven assists and two steals. Thomas shot 5-of-10 from deep and 7-of-16 overall to surpass his previous career high of 26 points. The rest of the team, however, made 1-of-15 from beyond the arc.

Kinard tallied a double-double of 16 points and 13 rebounds, shooting 10-of-13 from the foul line. Applewhite added 13 points on 4-of-9 shooting, and both Jahmari Etienne (12 points) and Lavar Harewood (11 points) also reached double figures.

NSU got going after a slow start to the game, building an 18-10 lead eight minutes in thanks in part to a pair of 3-pointers from Thomas. Free throws from Kinard and a trey from Etienne got the Bulldogs to within three, but Thomas and Pitt each had buckets to push the lead back to eight, 25-17, the largest of the game for NSU.

South Carolina State had a response, using a 15-3 run to go ahead by four, 32-28. Raynor-Powell, Harewood and Etienne each had 3-pointers to spark the surge for the Bulldogs. They later scored the last six points of the half to take a 39-31 lead at the break.

NSU made 41 percent from the floor, but more importantly the Spartans made 22-of-27 from the free throw line in the second half. They were 24-of-31 overall, and they also outscored the Bulldogs 19-7 in fastbreak points for the evening.