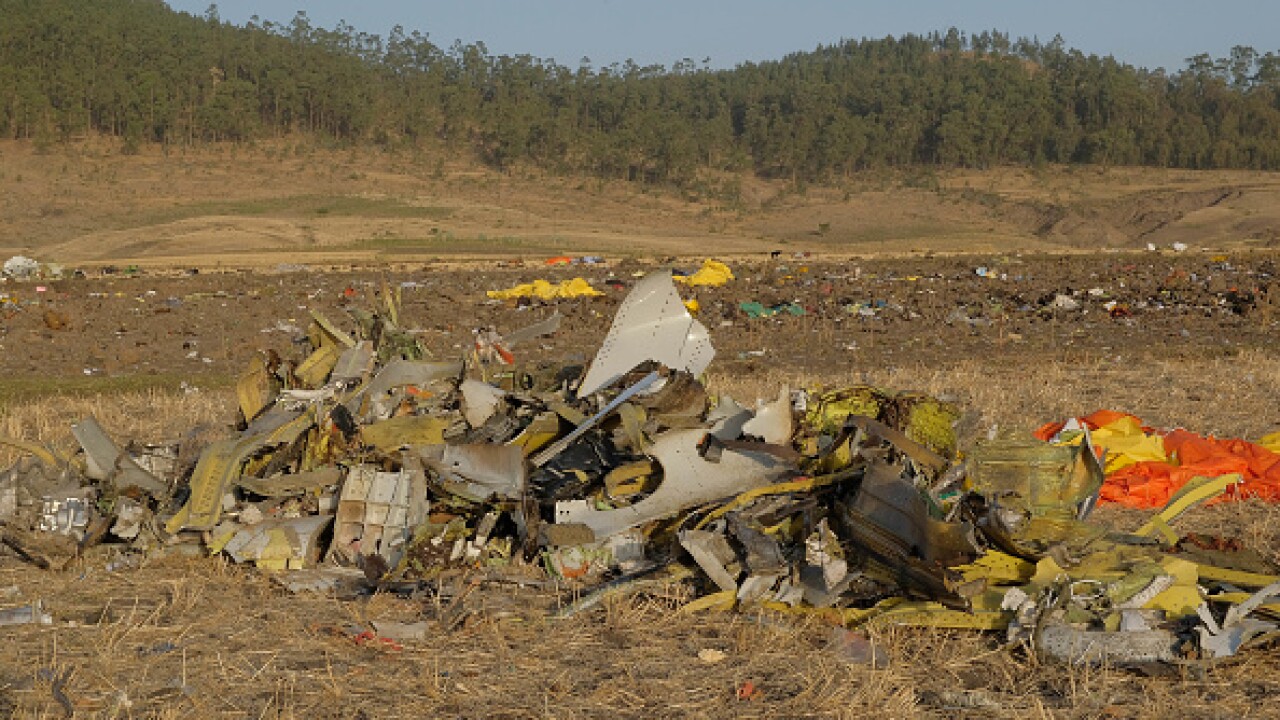 BISHOFTU, ETHIOPIA – MARCH 11: A pile of debris gathered by workers sits in the debris field during the continuing recovery efforts at the crash site of Ethiopian Airlines flight ET302 on March 11, 2019 in Bishoftu, Ethiopia. Flight 302 was just six minutes into its flight to Nairobi, Kenya when it crashed, killing all 157 passengers and crew on board on March 10. As a result of the crash, Ethiopia joined China and other countries in grounding their fleets of Boing 737 Max 8 jets. (Photo by Jemal Countess/Getty Images)

President Donald Trump says his administration is grounding Boeing Max 8 planes based on new information about the crash of an Ethiopian Air Boeing 737 aircraft.

BISHOFTU, ETHIOPIA – MARCH 11: A pile of debris gathered by workers sits in the debris field during the continuing recovery efforts at the crash site of Ethiopian Airlines flight ET302 on March 11, 2019 in Bishoftu, Ethiopia. Flight 302 was just six minutes into its flight to Nairobi, Kenya when it crashed, killing all 157 passengers and crew on board on March 10. As a result of the crash, Ethiopia joined China and other countries in grounding their fleets of Boing 737 Max 8 jets. (Photo by Jemal Countess/Getty Images)

Trump said from the White House on Wednesday that planes currently in the air would be ordered to land, and that airlines and pilots had been notified of the decision.

“It’s a terrible, terrible thing,” Trump said of the airliner issue, which led to more than 50 nations ordering the Max 8’s grounding.

“Boeing is an incredible company,” he said. “They are working very hard right now.”

He said the company was looking to find answers to the plane issue, but “until they do, the planes are grounded.”

The global grounding of Boeing’s 737 Max 8 airliner drew new attention to the close ties between the manufacturer and the Trump administration.

Trump has touted Boeing sales across the globe — including two weeks ago in Vietnam — and has cultivated close relationships with the company’s executives. His acting defense secretary served atop the company for more than three decades, including as the newly scrutinized planes were being developed. The company has spent millions over the past years lobbying decision-makers in Washington.

Now, as Boeing faces crumbling public confidence in one of its marquee products, those ties are being viewed in a new light.

Trump spoke by phone Tuesday with CEO Dennis Muilenburg, who assured him the 737 Max 8 was safe, despite two recent crashes. Hours after the call — which was scheduled after a crash in Ethiopia killed 157 people — the Federal Aviation Administration said it remained confident in the planes, even as governments across Europe and Asia grounded them.

Helmed by an acting administrator for more than a year, the FAA finds itself the focus of congressional and public scrutiny for its role in inspecting and ensuring the safety of Boeing airplanes. Some US pilots who fly the Boeing 737 Max registered complaints about the way the jet has performed in flight, according to a federal database accessed by CNN.

One of the pilot complaints from the federal database include a report saying it is “unconscionable” that Boeing, the FAA and the pilot’s airline (which was unnamed) would have pilots flying the aircraft without adequate training or sufficient documentation.

The same entry also charges that the flight manual for the 737 Max 8 “is inadequate and almost criminally insufficient.”

The FAA posted a statement on Twitter saying they are ordering the temporary grounding of Boeing 737 Max by U.S. airlines.

#FAA statement on the temporary grounding of @Boeing 737 MAX aircraft operated by U.S. airlines or in a U.S. territory. pic.twitter.com/tCxSakbnbH

Trump was expected to name Steve Dickson, a former Delta executive, to the permanent FAA administrator role as of last week, according to a senior administration official.

The President made the selection before the current Boeing controversy, and the timing of any announcement isn’t clear. The official said no nomination is considered final until Trump makes his decision public.

The administrator role has been filled in an acting capacity by deputy administrator Daniel Elwell for more than a year. Dickson was Delta’s senior vice president for flight operations and is a former military and commercial pilot, including of earlier versions of the 737 aircraft.

Trump initially wanted to name the pilot of his personal jet, John Dunkin, to the job but faced questions about Dunkin’s qualifications. Trump has long cast himself as an authority on air travel and aviation, including in a tweet on Tuesday.

“Airplanes are becoming far too complex to fly. Pilots are no longer needed, but rather computer scientists from MIT,” he wrote, adding: “I don’t know about you, but I don’t want Albert Einstein to be my pilot. I want great flying professionals that are allowed to easily and quickly take control of a plane!”

Earlier Wednesday, Canada’s minister of transport said the country would no longer allow Boeing 737 Max 8 or 9 aircraft to take off or land in Canada. A day earlier, the European Union suspended operations of the Boeing 737 Max 8 model. That followed announcements from countries in Asia, Africa and the Middle East declaring use of the plane forbidden, for now.

Startling real-time flight tracking maps showed the plane flying only over North America — and nowhere else — as the White House and the FAA continued to deem the aircraft safe.

Democratic and GOP lawmakers say they disagree. Senators calling for a temporary grounding of the planes include Republicans Mitt Romney, the 2012 presidential nominee, and Ted Cruz, who chairs a subcommittee on aviation and space. Sen. Roger Wicker, another Republican, announced the Commerce Committee he chairs would hold a hearing on the matter.

Sen. Richard Blumenthal, a Connecticut Democrat who sits on the Senate Commerce, Science and Transportation Committee, said the partial government shutdown at the start of the year may have affected the FAA’s ability to execute planned software changes on the Max 8 planes.

“The government shutdown absolutely aggravated and exacerbated the failures of the FAA and insisted on a quicker timetable for installing new software dealing with the sensors,” he said. “This problem is not a technological equivalent of rocket science. They had the new software. They knew of the problem with the sensors. The airline should be held accountable, but the FAA has a responsibility to act right away.”

The FAA declined to comment on whether the shutdown delayed a software fix.

Asking on Capitol Hill Tuesday whether the planes were safe to fly, acting Defense Secretary Patrick Shanahan — who was an executive at Boeing for 31 years, including overseeing commercial aircraft — demurred.

“Let me just say this: my condolences go out to all the all the families on Ethiopian Airlines,” he said. “These situations, as you well know, are very serious and let’s let the FAA and others take command of the situation and trust that part of the process.”

Shanahan has faced accusations of being overly warm to his former employer in his Pentagon role, including in a new request filed Wednesday by a government watchdog group asking the Defense Department’s inspector general to investigate whether Shanahan violated government ethics rules.

“It is extremely disturbing that acting Secretary Shanahan appears to be using his public office for Boeing’s private gain,” said Noah Bookbinder, executive director of Citizens for Responsibility and Ethics in Washington, which filed the complaint. “Ethics rules make clear that government employees cannot abuse their offices to promote a private company, much less work on official matters involving their former employer.”

Shanahan wouldn’t be alone in promoting Boeing’s products. It was only two weeks ago that Trump himself oversaw the sale of 100 of the 737 Max planes while in Hanoi for a summit with Kim Jong Un.

Ahead of his nuclear talks, Trump participated in a trade singing ceremony with a number of airline executives inside the Vietnamese presidential palace. Among them was Kevin McAllister, Boeing’s executive vice president CEO of Boeing Commercial Airplanes.

Among the agreements was a deal between Boeing and VietJet, a low-cost airline based in Hanoi, for 100 of the 737 Max planes — 80 of the Max 10 variety, and 20 of the Max 8, the aircraft current under scrutiny. Boeing said the order was worth $12.7 billion.

Now, Vietnam says the safety issues must be resolved before the planes can fly.

“The first aircraft [in the order] is supposed to be delivered in October,” said Đinh Việt Thắng, the chief of Vietnam’s Civil Aviation Authority, according to Vietnam News. “This morning, we had a meeting about this issue and came to the decision that we will not be reviewing licences for the use of Boeing 737 MAX planes until the causes for the crashes are identified and the US Federal Aviation Administration takes proper remedying measures.”

Wednesday afternoon Southwest Airlines and American Airlines announced they are complying with the FAA requirement:

Our statement regarding the Boeing 737 MAX 8: pic.twitter.com/sjoCGwffby

Update on our @Boeing 737 MAX fleet:https://t.co/tVUWIHmzyQ