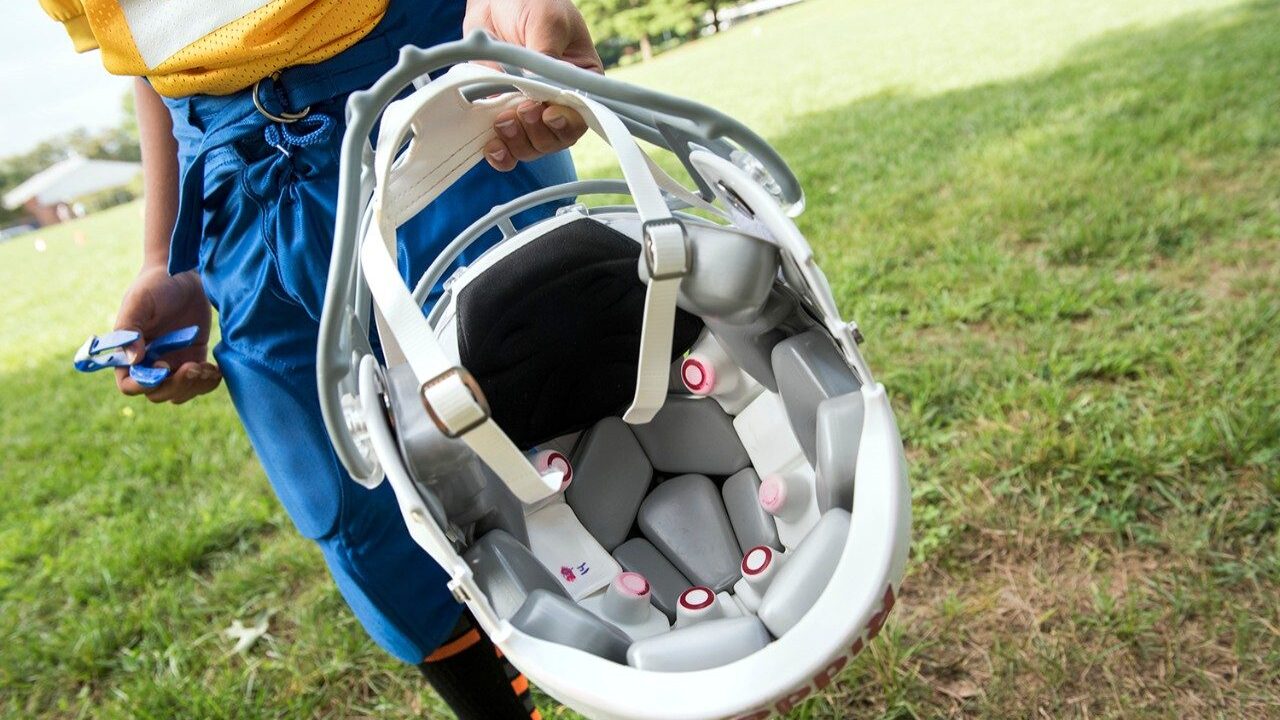 Sensors lining a youth football helmet record impacts a player experiences on the field. The data has helped researchers in the Virginia Tech Helmet Lab design a rating system tailored to the needs of youth players, whose concussion risk differs from that of older athletes.

The majority of people playing football in the U.S. aren’t NFL players or collegiate athletes.

According to Virginia Tech Daily, they’re actually youth players less than 14 years old. Up until now, there hasn’t been independent data evaluating the effectiveness of the helmets these athletes wear on the field.

With the release of youth football-helmet ratings by the Virginia Tech Helmet Lab, consumers can see which helmets best reduce concussion risk.

Data from the group’s studies of head impacts among youth football players allowed for a design test methods that reflect the types of impacts these athletes actually experience on the field.

“For the first time we’ve adapted the way we evaluate helmets in the lab to be youth-specific,” explained Steve Rowson, an associate professor of biomedical engineering and mechanics and the Helmet Lab’s director. “Now, players, parents, leagues, and coaches have access to independent data about which helmets offer the best protection, and they can use the ratings as a tool to make informed decisions.”

Seven helmet models earned five stars, which is the highest possible rating. The rest earned three or four stars. The ratings include every helmet youth football helmet currently on the market, and every company had at least one five-star model.

The Virginia Tech Helmet Lab has been rating varsity football helmets since 2011; their five-star scale, which they have since expanded to other sports, has provided more clarity to consumers and helped drive innovation in the helmet industry.

Most varsity football helmets had corresponding youth versions, but there were often few differences between them. The research says that this is not because concussion risk is identical between the two groups, but because there was little data describing how risk differs for youth players.

Mark Begonia, director of testing for the Virginia Tech Helmet Lab, sets up an impact test for a youth football helmet.

“Kids aren’t just scaled-down adults,” Rowson explained. “Their heads are larger relative to their necks; their necks are weaker; and their brains are still developing.”

Those features change the way a player’s head and brain will respond to an impact and affect the risk of sustaining a concussion or other head injury.

Understanding those differences is essential to designing effective helmets for youth players and developing realistic methods for testing them.

Since 2015, Rowson and his team have been leading an NIH-funded study of head-impact exposure in youth football. The $3.3 million multi-university effort, the largest biomechanical study of youth football players to date, uses sensors embedded in players’ helmets to record impacts that occur on the field.

The sensors capture data about how hard the players hit their heads, how often, and where on the helmet. By cross-referencing that data with clinical measures like concussion diagnoses and cognitive testing, the researchers could determine which kinds of impacts were most likely to cause a concussion in youth players.

“At this point, we have a pretty good idea of how youth players impact their helmets, and which impacts are most likely to result in concussion,” Rowson said. “We were able to take that information from the field and replicate those impacts in the lab, so that we were evaluating the helmets under realistic conditions that are relevant to youth players.”

Each helmet model went through 48 tests that covered four impact locations and three impact velocities. The helmets were fitted on a dummy headform and neck modeled after the average male between 10 and 12 years old.

Sensors lining a youth football helmet record impacts a player experiences on the field. The data has helped researchers in the Virginia Tech Helmet Lab design a rating system tailored to the needs of youth players, whose concussion risk differs from that of older athletes.

The helmets that effectively reduced head acceleration during impacts earned higher scores. Rowson’s team found that helmets that didn’t perform as well in the ratings typically had front pads that were too stiff.

“The front location is where kids hit their head the most, and at high energies, so that front pad plays a big role,” Rowson said. “The lower-rated helmets would test considerably better simply by reducing the stiffness of that front padding.”

The ratings come at a time when football is under mounting scrutiny for the potential head-injury risk. Rowson stresses that it’s possible to engineer a safer game, but that there are many pieces to the puzzle.

“When you’re thinking about how to minimize concussions in contact sports, helmets are part of the solution—but they aren’t the whole answer,” Rowson said. “You’ll see the greatest improvement by making data-driven changes to rules, practice structures, and player behavior that reduce the number of head impacts in the first place. But some residual number of incidental head impacts are inevitable, and in those cases, having the very best protection will reduce the risk of injury.”

The research team says they will continue to update the ratings as new helmets are released.