Rescuers have evacuated more than 400 people from a cruise ship, a day after the vessel was stranded in rough seas off Norway with 1,300 passengers and crew on board.

The Viking Sky ship sent a distress signal Saturday due to engine problems in bad weather, Joint Rescue Centre for Southern Norway spokesman Per Fjeld said. Three of the ship’s four engines were working again on Sunday and tug boats were trying to move the stricken ship slowly to shore.

Passengers aboard the cruise ship say the vessel is being tossed about by wind and waves as they continue to await rescue. There is no estimate on how long it will take to get all the passengers out, Fjeld said.

“There are at least two or three helicopters still rescuing people from the cruise ship but there is only one helicopter in operation at one given time because of the weather,” a spokesperson from Norwegian rescue services (HRS Southern Norway) told CNN.

“They work in rotations because it is not possible to hoist people from two helicopters working at one time.”

Rescuers are facing rough seas and waves as high as 6-8 meters (roughly 19-26 feet) as they work to airlift passengers from the Hustadvika area on the western coast of Norway.

The Norwegian Red Cross, which was treating passengers from the ship at an evacuation center in Hustadvika, said that they were seeing injuries including bruising, broken bones and cuts. 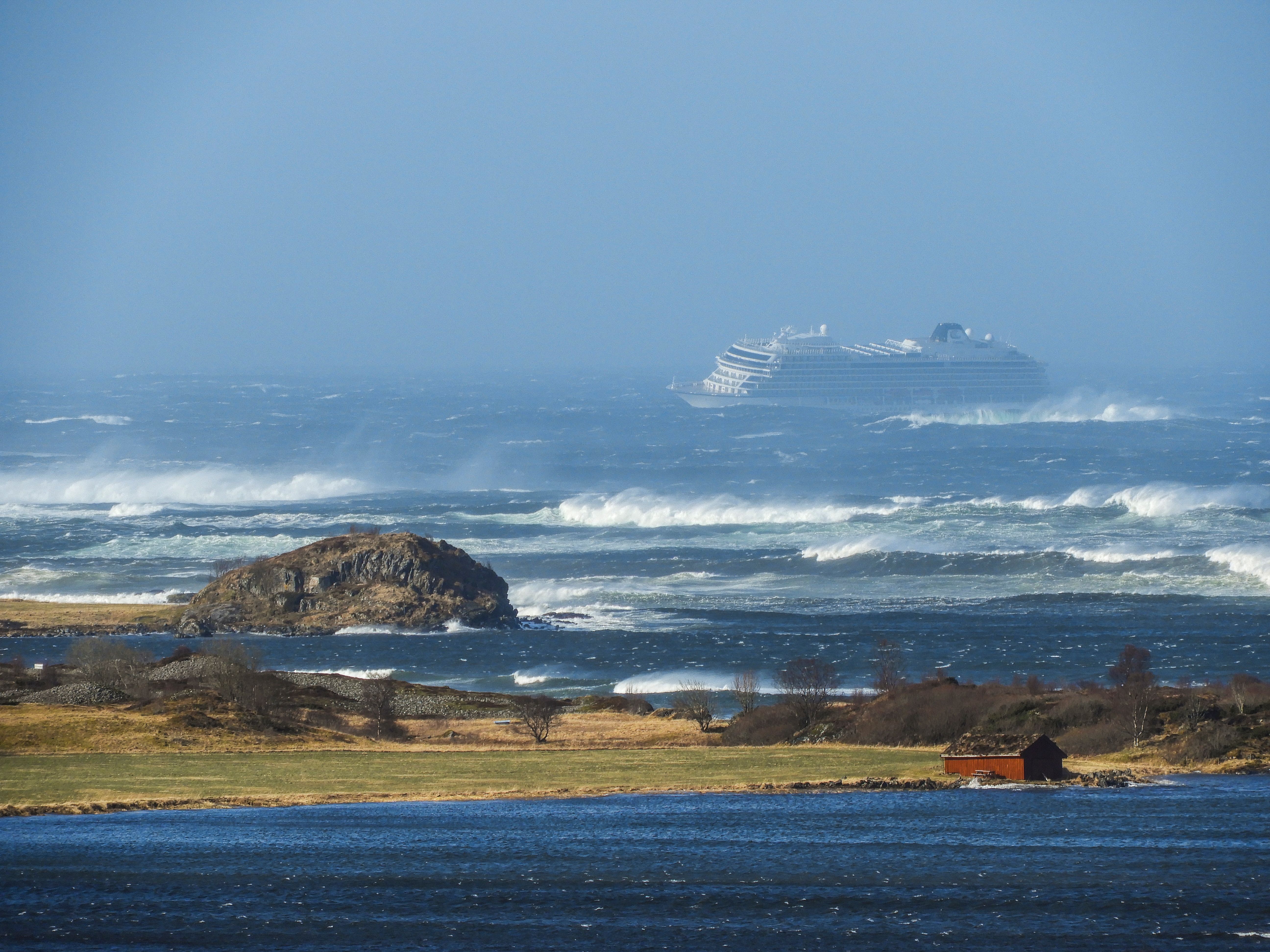 A desperate wait for rescue

After being evacuated to shore, American passenger Jan Terbruegen described the scenes on board the Viking Sky to CNN affiliate Dagbladet.

“Furniture would slide across the room, slide back and with it came people and glass. It was a very dangerous situation, frankly,” Terbruegen said.

He said they had been told to abandon ship quickly — leaving little time to be scared.

“We were trying to stay lower in the ship towards the center just because it was a recipe for seasickness. And then they called muster stations and within half an hour we figured out that we’re getting off here. We could see that we were getting blown in towards some rocks. That was the most frightening thing, I think. But luckily that wasn’t our destiny.”

Fellow passenger Beth Clark described being airlifted from the vessel to Dagbladet.

“The guy came down from the helicopter — one of the Coast Guards — snapped my belt and said ‘hold it,’ and shot me up about 100 feet in the air and onto the helicopter,” she said.

“I was more terrified of hitting the blades. I didn’t look down, so that was my big fear. Everyone had their different fears, that was mine . But they were awesome, I mean as soon as they hoisted me up, he grabbed me and pulled me in like a sack of potatoes and drug me to the back of the helicopter.”

Passenger Alexus Sheppard from northern California said Saturday she had been waiting almost six hours to be evacuated. Most people were fairly calm, she said, and they were being served food and water.

Another passenger, Ryan Flynn, described the desperate wait for rescue.

“It’s about 3:15 a.m. local Norway time and many of us are still stranded on the Vikings Sky,” he tweeted. “It’s miserable as the seas are still very high with strong winds. The ship continues to pitch and roll. Captain is hoping the winds and seas calm enough to bring ship into port.”

Authorities initially sent five helicopters and a number of vessels to evacuate the passengers. They were forced to divert some resources when a nearby freight vessel lost engine power, putting that ship’s crew in danger, rescue center officials said.

Norwegian police said that evacuees were being processed onshore at the Brynhallen indoor sports stadium.

Passengers were then being taken to hotels in Molde and Kristiansund, where evacuee centers had been established, they said.

The Norwegian Red Cross said it was assisting.

In a statement on its website, Viking Ocean Cruises said the ship “experienced a loss of engine power off the coast of Norway near Molde” about 2 p.m. local time Saturday.

“Our first priority was for the safety and wellbeing of our passengers and our crew, and in close cooperation with the Norwegian Coast Guard, the captain decided to evacuate all guests from the vessel by helicopter,” it said.

The Viking Sky ship, owned by Viking Ocean Cruises, was built in 2017 and can hold 930 guests, according to the company’s website.

The vessel was on its way to Stavanger from Tromso, according to the website Marine Traffic. Viking said it had canceled its next sailing — Scandinavia and the Kiel Canal — which had been scheduled to depart March 27.