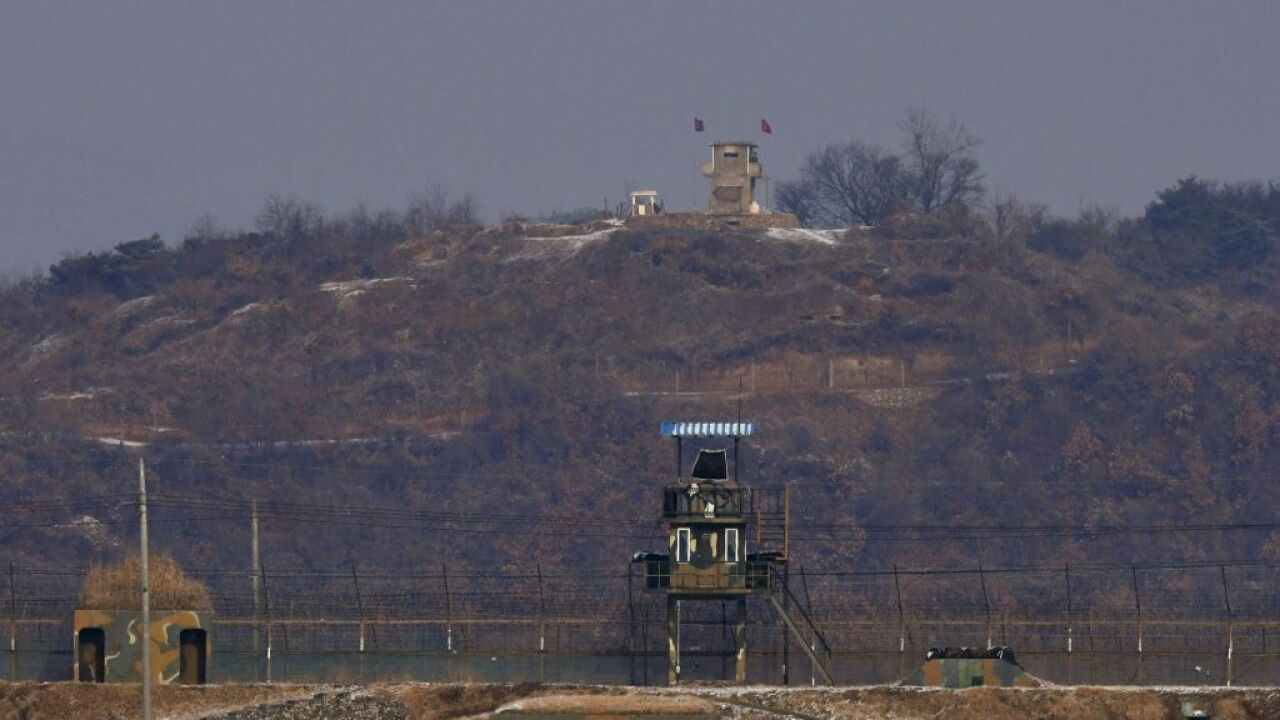 This picture taken on February 16, 2019 shows military guard posts of South Korea (bottom) and North Korea (top) stand opposite each other as seen from in the border city of Paju. – US President Donald Trump is due to meet the North’s Kim Jong Un in Hanoi for a high-profile summit to make progress on denuclearisation of the peninsula, and a possible peace treaty. If that happens, the future of the South’s controversial conscription system — which forces recruits to serve for months in often remote locations along the militarised border — will likely be up for debate. (Photo by Jung Yeon-je / AFP) / TO GO WITH SKorea-NKorea-defence-social,FOCUS by Claire LEE (Photo credit should read JUNG YEON-JE/AFP/Getty Images)

North Korean officials have returned to a joint liaison office near the demilitarized zone (DMZ) with South Korea, days after they informed Seoul they would be withdrawing from the project, a key symbol of the rapprochement and ongoing peace process between the two countries.

The apparent reversal comes after US President Donald Trump announced he was overruling a decision by his Treasury to impose new sanctions aimed at North Korea.

“It was announced today by the US Treasury that additional large scale Sanctions would be added to those already existing Sanctions on North Korea. I have today ordered the withdrawal of those additional Sanctions!” Trump tweeted on Friday.

While Trump’s tweet came after sanctions imposed against Chinese shipping companies which did business with Pyongyang, two sources familiar with Trump’s tweet told CNN it was in fact not about those sanctions, but instead about additional large-scale sanctions targeting North Korea that have been in the works.

While Pyongyang had not mentioned the sanctions in its communication to Seoul about withdrawing from the liaison office, analysts pointed to the apparent worsening relationship with Washington following a failed summit between Trump and North Korean leader Kim in Hanoi last month as the likely cause of the move.

“North Korea’s pull-out Friday from the Kaesong Liason Office has been on cards since Hanoi, given recent no-shows there,” Chad O’Carroll, an analyst and chief executive of the Korea Risk Group, said Friday.

He added that the move was designed to send a message that from Pyongyang’s perspective “Seoul has insufficient influence” over the US-North Korea relationship and that intra-Korean talks are increasingly pointless, “when sanctions prevent practical cooperation.”

According to South Korea’s Unification Ministry, which handles relations with North Korea, on Monday morning everything appeared to as usual at the liaison office, which is located in the town of Kaesong, just north of the DMZ.

“This morning around 8:10AM, some personnel of the North side’s liaison office came to the South-North joint liaison office and are currently working,” the Unification Ministry said in a statement. “The North side said ‘We came down today to be on shifts as usual’.”

“The North side has yet to clearly mention the reason for the withdrawal and return, we plan to identify in the future,” the statement said, adding the office would “continue to operate as usual.”