‘Us’ evokes the consummate ’80s event: Hands Across America 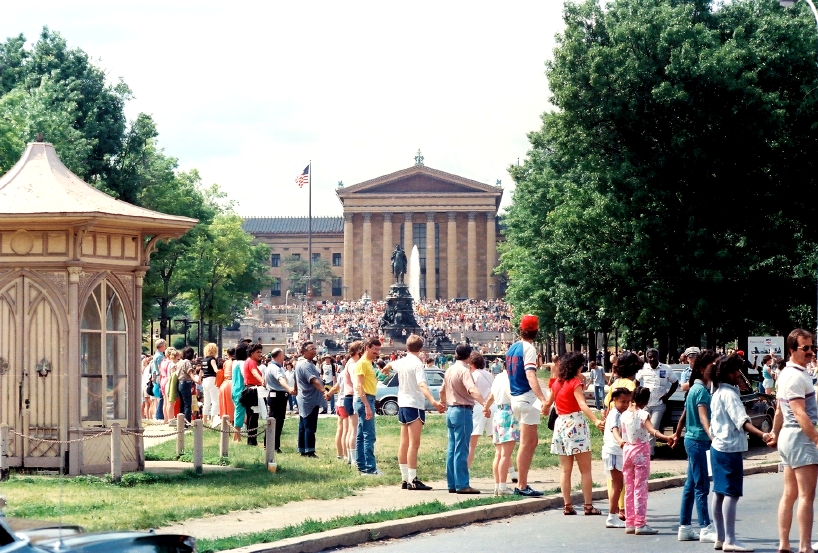 RICHMOND, Va.  — Jordan Peele’s newest film, “Us,” is doing more than just breaking box-office records — it’s also taking audiences back to 1986, when the charity event Hands Across America inspired Americans to try to form a nationwide human chain to raise money for homelessness and hunger.

Dubbed by The Washington Post as “the most Eighties thing to ever happen in the 1980s,” the star-studded cause attempted to pull off something unique, though it wasn’t as successful as its founders had hoped it would be. That failure to create an unbroken chain and the theme of treating all equally are explored in “Us.” But enough of that, because spoilers.

The idea for Hands Across America was proposed by Ken Kragen, president of the nonprofit group USA for Africa. A year before the event, the organization rallied up some of the most recognizable celebrities at the time to record the song “We are the World” to raise awareness for hunger in Africa. The song was a massive success, selling more than 7 million records across the globe and raising more than $60 million for its cause.

Energized by the success of his previous campaign, Kragen was next inspired to help citizens of his own country who faced hunger and homelessness.

His plan: to raise between $50 million and $100 million for America’s homeless population by enlisting millions of people to donate small amounts of money — up to $35 — before joining hands and creating a massive human chain across the nation.

The event started in Manhattan and ended in Long Beach, California. The project was as ambitious as it sounds; it required nine months of planning and a staff of 400 people to bring Kragen’s dream to fruition.

Who and what was involved?

As a manager for musical talents such as Lionel Richie and the Bee Gees, Kragen was no stranger to celebrity, and he utilized his A-list connections to the fullest. This included getting a handful of famous names, from actors to musicians, to co-chair and promote the event.

In an ad that aired during the 1986 Super Bowl, celebrity co-chairs Bill Cosby and Lily Tomlin explained to millions of Americans what the event was all about, with Tomlin calling it “the biggest community event in the history of the world.”

A special theme song was created specifically for the event. But the song featured no major names, and it reached only No. 65 on the Billboard Top 100 chart.

The event was surprisingly expensive for such a seemingly simple concept. Coca-Cola and Citibank were the main sponsors, along with other major brands. The two companies contributed a combined $8 million, and 2,000 miles of the 4,125-mile route were sponsored. Pop icon Prince sponsored the first mile of the chain, which began in Battery Park with the Statue of Liberty as a backdrop.

President Ronald Reagan made headlines and was criticized for participating in the event, standing hand in hand with his wife Nancy and the president’s staff on the front steps of the White House. Not everyone was thrilled by this, as many homelessness advocates viewed Reagan’s participation as an “ineffectual feel-good exercise.”

How effective was it?

The event cost an estimated $17 million to produce and generated only about $15 million in donations, far below its $50 million goal. Organizers estimated that 5.5 million people were needed to form the chain. According to the Associated Press, 4,924,000 people participated in total. There were gaps in certain areas, namely the Southwest.

“Nothing like this had been tried before, and I think that’s what made it so great,” Kragen said in an interview with ABC News. “Instead of ‘get out the vote,’ it was ‘get out and hold hands.’”

Hands Across America began at 3 p.m. on May 25, 1986. Participants joined hands for 15 minutes, singing “We Are the World” and “America the Beautiful.” It was the biggest hand-holding event in history.

Although many people called it “hokey,” Hands Across America provided a massive visualization and was emblematic of celebrity efforts in the ’80s to improve the world.

That idea of what makes the world a better place is explored in “Us,” a horror movie that poses philosophical questions for viewers.

As of Wednesday, “Us” had earned about $114 million worldwide, including over $70 million its opening weekend.