Programs aim to help disabled veterans stay in their homes

VIRGINIA BEACH, Va. - The past few years have been tough for Dennis Burroughs and his wife, Jean.

Dennis is now considered 100% disabled for heart disease after being exposed to Agent Orange during the Vietnam War. He was drafted into the Army, serving  as a sharpshooter during the Tet Offensive.

In recent years he's broken his sternum, suffered a heart attack and stroke and was diagnosed with Parkinson's disease, which makes his mobility limited.

"My hips are going bad. My knee. And my back of course it wasn’t worth a damn anymore. All the vertebrae they had to cement up," Dennis told News 3 anchor Todd Corillo.

With it being harder to get around, the Burroughses made the decision to live exclusively on the ground floor of their Aragona-area house in Virginia Beach that they had called home for 31 years. However, the bathroom in the space was not ideal for Dennis.

"It was hard. Getting in on the toilet was murder because I was too low, didn’t have nothing to hang onto," he shared.

"I was struggling with trying to give him sponge baths or trying to get him upstairs to the bathroom that has a tub and shower. His walking was very difficult to do the stairs, very unsteady," Jean commented.

So she sketched out a plan for a larger bathroom with a walk or roll-in shower. It expanded into a space that had a hot water heater and storage.

"I drew out a plan on an envelope and went over it with a contractor, and he said that there was enough space to do this." 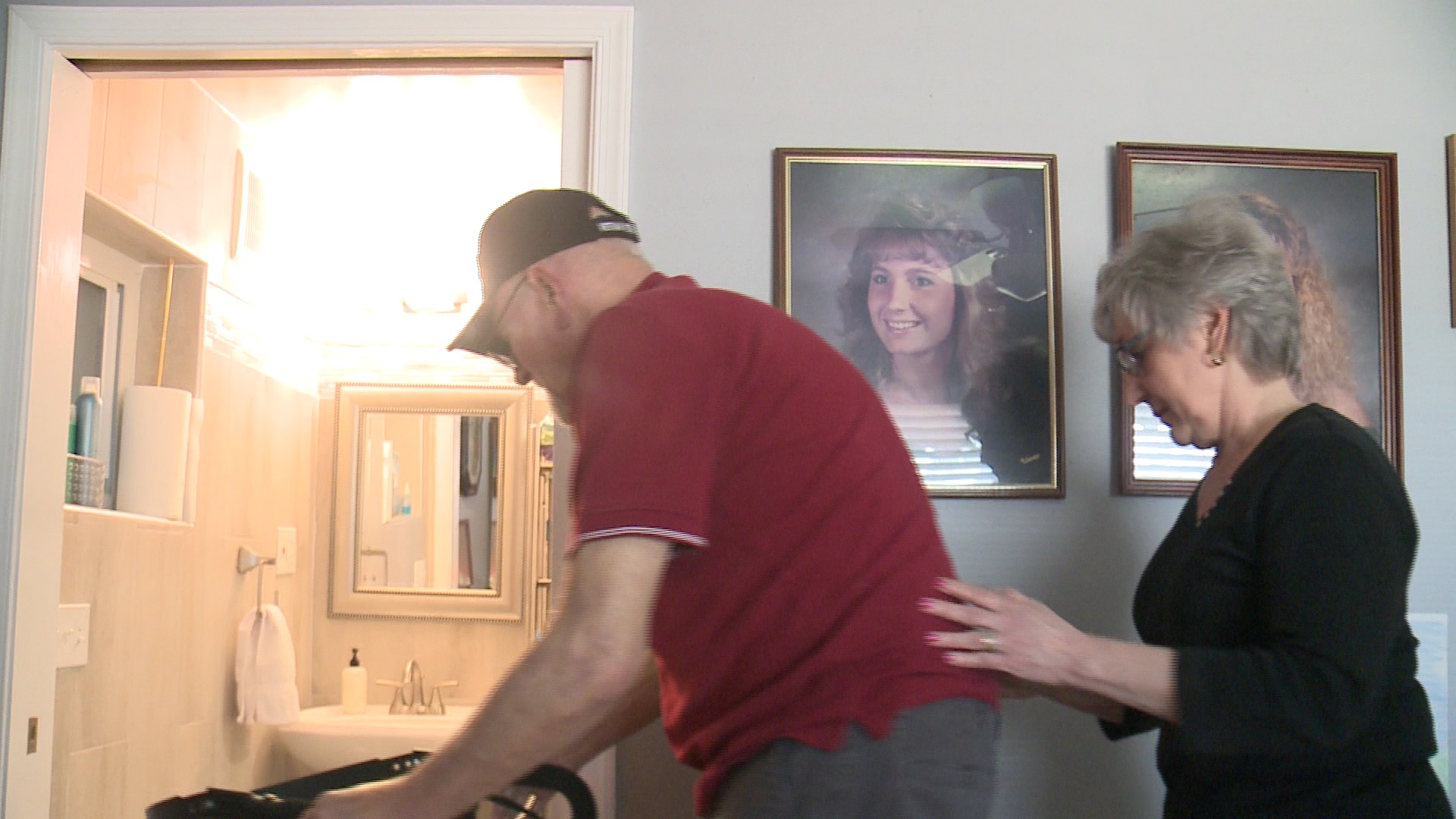 With a plan in mind, Jean set out to find money to pay for the work, which included tiling the bathroom, installing the shower and making the toilet accessible for Dennis.

She first applied for a Home Improvements and Structural Alterations (HISA) grant from the U.S. Department of Veterans Affairs. While working on that grant, which provides for medically necessary improvements and structural alterations, she learned about another program.

Granting Freedom is a grant offered by the Virginia Housing Development Authority that provides up to $6,000 to help disabled veterans and service members make needed modifications to their homes.

Jean was connected with Richard Barbee and Michael Steverson with Warrant Realty. The pair are accepted agents for the Granting Freedom program.

Both Barbee and Steverson retired from the Coast Guard after decades of service and got into real estate to keep helping people. Working with the program was a natural next step.

"With Richard and I being Coast Guard veterans, it was a no-brainer for us to help other veterans," Steverson said.

"We’re here to help. It doesn’t cost them a thing, the program is real and it’s an entitlement you’ve earned by your military service," Barbee added.

For the Burroughses, they were able to widen doorways and make the bathroom space totally accessible for Dennis.

"Everything is handicapped accessible. I had them expand the bathroom door to 36-inches so Dennis didn’t have any problem coming in here with either his wheelchair or his walker," Jean commented. "I used pocket doors wherever I could to eliminate the actual obstruction of swinging doors that would trip him up because he falls very easily."

Dennis recommends any veteran who may be struggling to apply for the grants.

"It helped us out. We still spent more than they gave us, but it was worth every penny."

Now, the Burroughses, married for 50 years, are able to stay in the home they've built together.

To learn more about the HISA grants from the Department of Veterans Affairs, including requirements, click here.

To learn more about the Granting Freedom grant from the Virginia Housing Development Authority, click here.

To get in touch with Richard Barbee and Michael Steverson with Warrant Realty, accepted agents for Granting Freedom, click here.