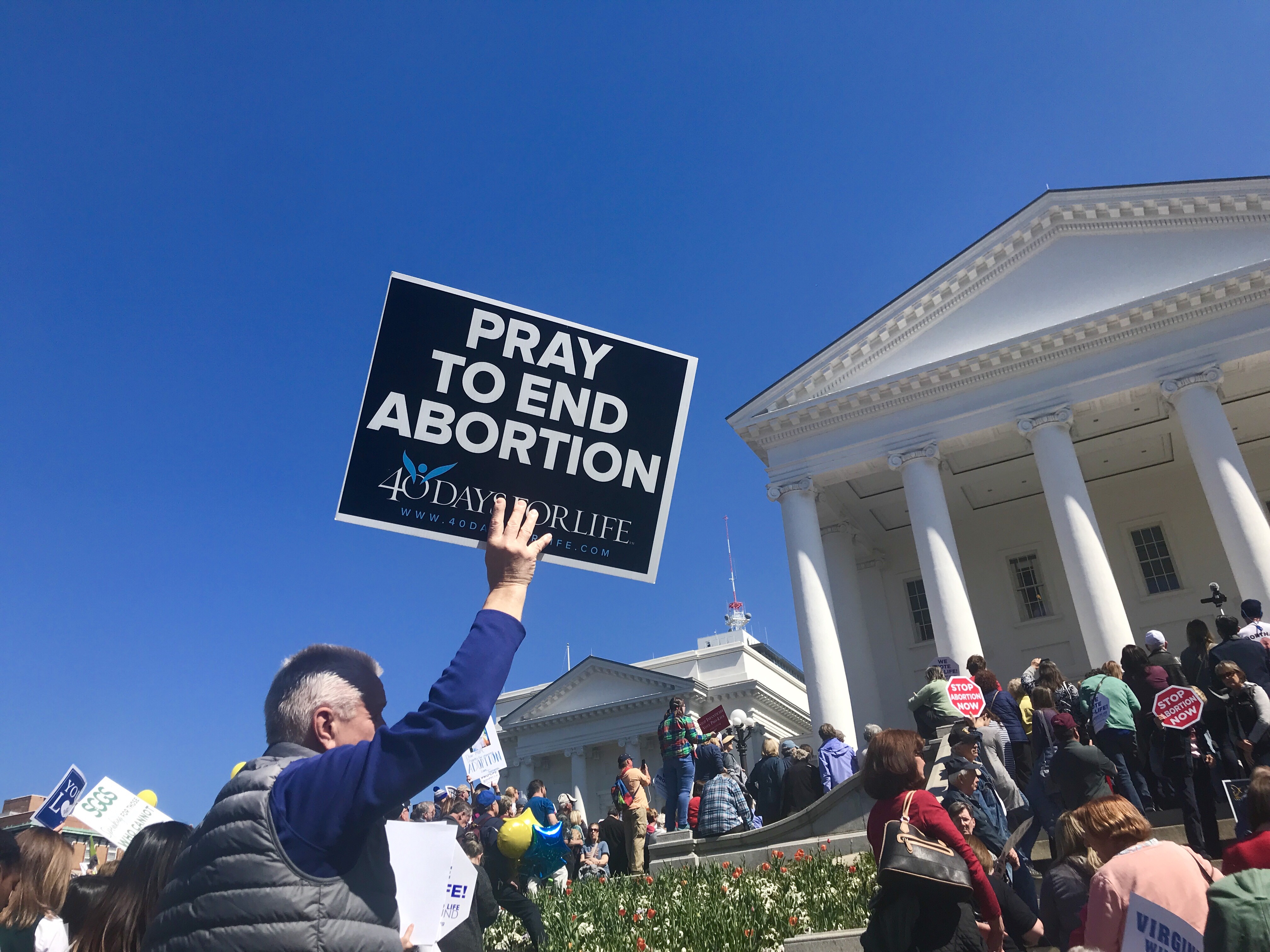 RICHMOND, Va. — More than 6,000 people gathered at the Capitol Wednesday to protest abortion-related legislation as Republicans in the House of Delegates blocked an amendment that would have allowed low-income women to obtain an abortion in the case of an incapacitating fetal diagnosis.

“One abortion in any state is one too many,” Mancini said.

Besides the Family Foundation, the Virginia Catholic Conference and the Virginia Society for Human Life also helped organize the demonstration.

Attendees filled the grounds surrounding the Capitol. Many brought lawn blankets and their young children, who held on tightly to yellow “life” balloons during the rally.

The rally followed a protest that abortion opponents and civil rights groups held at the Capitol on Feb. 23. During that event, demonstrators called on Gov. Ralph Northam to resign because of his admission that he wore blackface in the 1980s and because of his comments in support of legislation to relax certain restrictions on late-term abortions.

The legislation, introduced by Del. Kathy Tran, D-Fairfax, would have reduced the number of doctors required to certify late-term abortions. Under questioning by a Republican lawmaker, Tran said her bill would have allowed an abortion up until moments before a birth. Tran later said she had misspoken.

During a live radio interview in January, Northam, a pediatric physician, was asked about the measure and discussed the procedures for a third-trimester abortion involving a nonviable fetus. Afterward, people in the anti-abortion movement contended that Northam was supporting infanticide — the act of killing a child within a year of birth.

Speakers at Wednesday’s rally referred to that controversy.

“I was appalled in January to see the bill put forth by Del. Kathy Tran and then endorsed by Gov. Northam,” Mancini said. “We were all shocked by the audacity of that bill.”

March For Life holds a rally in Washington, D.C., on January 22 each year, marking the anniversary of Roe v. Wade.

The rally was held as members of the General Assembly returned to the Capitol to vote on bills that had passed during this year’s legislative session but had been vetoed or amended by Northam. One such bill was the state budget — HB 1700.

Northam recommended an amendment to allow low-income women to access abortion in the case of an incapacitating fetal diagnosis. The governor also sought to restore a pilot program on access to long acting reversible contraception, such as IUDs.

Those amendments were defeated on party-line votes in the House of Delegates.

“Since 2008, anti-reproductive rights politicians have proposed 178 attacks on reproductive healthcare access in Virginia and today is only a continuation of those attacks. Politicians have no business inserting themselves in what should be private medical decisions between patients and doctors.”