Nipsey Hussle funeral service draws mourners from across the country

President Barack Obama and Nation of Islam Minister Louis Farrakhan were among those paying tribute to rapper and businessman Nipsey Hussle during his Los Angeles funeral service Thursday.

Karen Civil, Nipsey's longtime friend and marketing strategist, read a letter from Obama, whose daughters introduced him to Nipsey's music. The president thanked the rapper -- who was slain last month -- for lifting up his South Central Los Angeles community.

"He set an example for young people to follow and is a legacy worthy to follow," Civil said, reading Obama's words.

Calling Nipsey a "prophetic soul," Farrakhan said the artist, born Ermias Asghedom, meant to hip-hop what Bob Marley meant to reggae. Farrakhan applauded him for his efforts to forge ties between the Crips street gang, to which Nipsey belonged, and the rival Bloods.

"He lived the gang life, but he didn't stay there," Farrakhan said. "Sometimes when you can fly above the circumstances of your life, it produce envy and enmity and jealousy among those who have not learned how to fly, but Ermias was more than a hip-hop artist. He was a voice and brilliant mind, and the spirit of God was in his life."

Tickets for Thursday's "Celebration of Life" were made available free of charge to California residents earlier this week. They were gone in 30 minutes. The Staples Center, home to the Los Angeles Lakers and Clippers, accommodates about 21,000 people.

Singers Anthony Hamilton, Marsha Ambrosius and Jhene Aiko, who delayed the release of new music this month to reflect on Nipsey's death, performed music in his honor.

Aiko performed "Eternal Sunshine," whose lyrics begin, "Is is strange for me to say that / If I were to die today / There's not a thing I would change / I've lived well / Maybe I have made mistakes and been through my fair share of pain / But all in all, it's been OK, I've lived well."

Rapper Snoop Dogg, who grew up in nearby Long Beach, also paid tribute.

Organizers have announced a procession following the service that will run 20 to 25 miles through the streets of Los Angeles and encompass places that were important to the rapper. 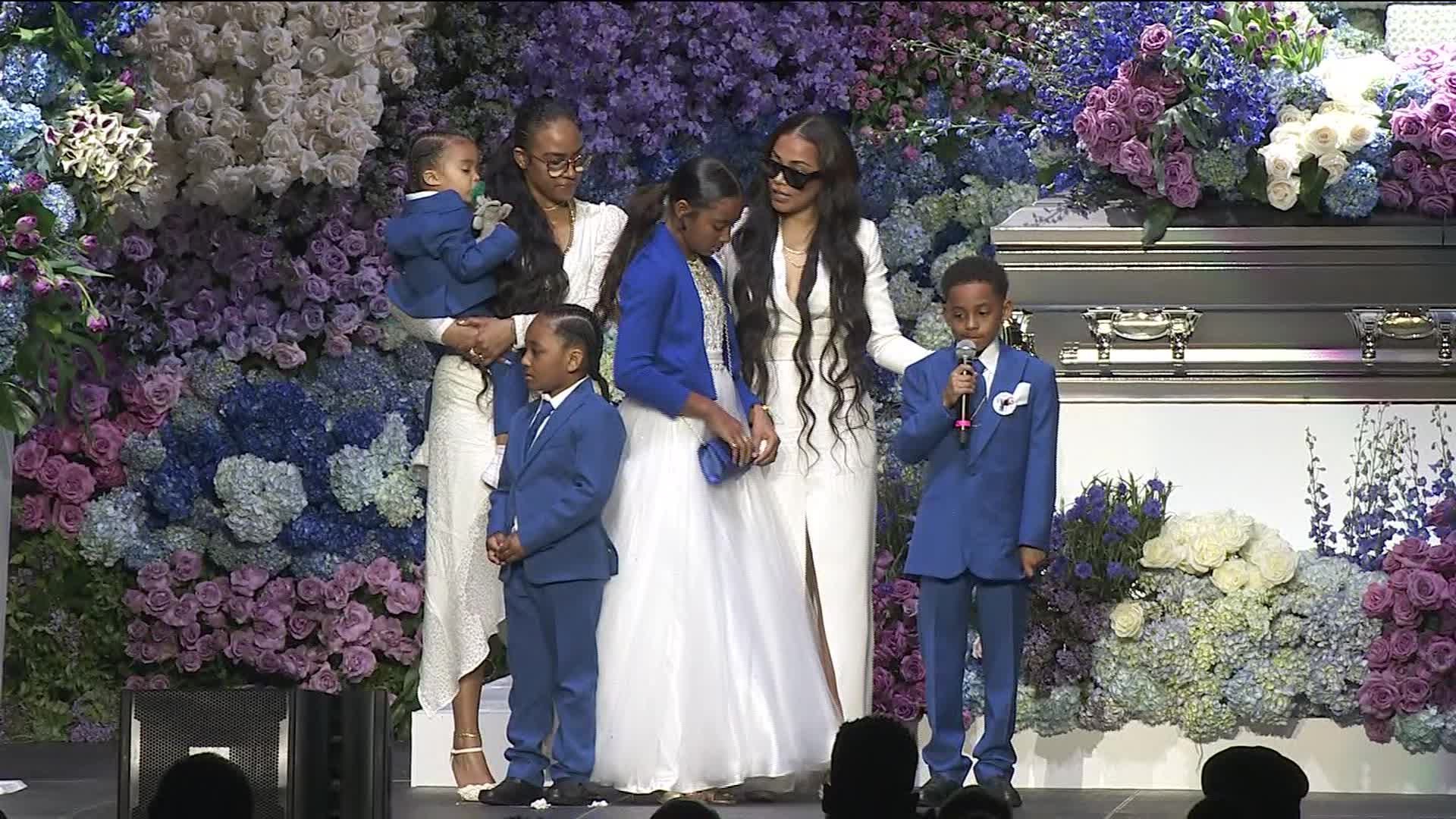 His mother, Angelique Smith, shared anecdotes about her precocious yet stoic boy who loved amusement park rides and, as an adult, embraced a child-like joy while riding his all-terrain vehicle up and down Fifth Avenue near the Hyde Park neighborhood where he was slain.

Video showed Nipsey playing as a kid, traveling to Africa on an airplane, practicing the Tigrigna language and telling his father, "I love you, daddy."

His brother, Samuel Asghedom, recalled Nipsey's intelligence, how at a young age he built a computer from spare parts and later taught himself to make music on it.

He paraphrased a lyric from Nip's song, "I Don't Stress" -- "I could die today, I've made the set proud" -- and, pointing to the crowd, said, "You made the world proud. Look at this s**t, bro." The capacity crowd roared.

"Everything he said in the music is who he was," Asghedom said. "You stand up for what you believe in. You put your money where your mouth is. You never fold. ... I hope everybody knows that's what bro did. Bro stayed and he died on Crenshaw and Slauson."

Longtime girlfriend Lauren London praised the love of her life as an amazing father and said, "I am honored and blessed that I got to experience such a man." Nipsey always said: They can't take away what's inside someone, she recalled. Now, she said, Nipsey resides in all who loved him.

"My heart hears you. I feel you everywhere. I'm so grateful I had you, and until we meet again, the marathon continues," she said referencing her boyfriend's 2011 mixtape.

Some fans journeyed a long way to pay respects

Mourners from as far away as Maryland and Minnesota traveled to Los Angeles to honor Nipsey, who they say was a major influence in their lives.

Eritrea-born restaurant owner and activist Wintana Nelekin traveled from Minnesota to honor Nipsey, whom she met once after organizing a speech for young people in Minneapolis. She said he taught her that her opportunities were layered and boundless.

Latrell Parker, a barber and photographer from Fredericksburg, Virginia, also traveled across the country to honor the rapper. Wearing a shirt bearing the musician's image with the caption "The Marathon Continues," he told CNN that as an entrepreneur himself, he always admired how Nipsey taught others to pursue their goals.

Added Breanna Henderson, who was attending the vigil with friends: "We're sad to see him go, but we're happy that he left a legacy for us to continue."

The rapper's reach was bigger than music

The Eritrean-American rhymesmith was beloved not only for his Grammy-nominated music -- he dropped a dozen or more mixtapes before releasing his studio debut, "Victory Lap," to acclaim last year -- but also for his activism and entrepreneurship dedicated to uplifting his community.

Those who knew him say he cherished the Crenshaw District where he grew up. The 33-year-old owned businesses there, invested in the community, paid for funerals and kids' shoes and counted several Los Angeles rappers among his influences and collaborators.

Though he was a member of the Rollin 60s Neighborhood Crips, he reached out to police leaders before he died to discuss ways to curb gang violence and help youngsters. He also made music with Bloods-affiliated rappers such as The Game and YG, who counted him as a friend. YG was a pallbearer at Thursday's service.

"Our brother never left the 'hood," Farrahan said during Thursday's service before referencing the rival gangs' colors. "As he loved the red, he loved the blue. ... He walked among the blue with a heart for the red and all the colors in between because his life was for the unity of the red and the blue, the unity of the 'hood. So when we celebrate Nipsey, we must celebrate unity."

Nipsey was gunned down March 31 in Los Angeles near the clothing store he owned at Slauson Avenue and Crenshaw Boulevard. Eric Holder, a man Nipsey knew, repeatedly approached the rapper that Sunday afternoon before returning with a handgun that he "purposely and repeatedly fired" at the rapper, killing him and injuring two others, Los Angeles police Chief Michel Moore said.

Holder has pleaded not guilty to one charge of murder and two counts of attempted murder. The 29-year-old was also charged at his arraignment with possession of a firearm by a felon.

Click here for our full coverage on Nipsey Hussle's murder.