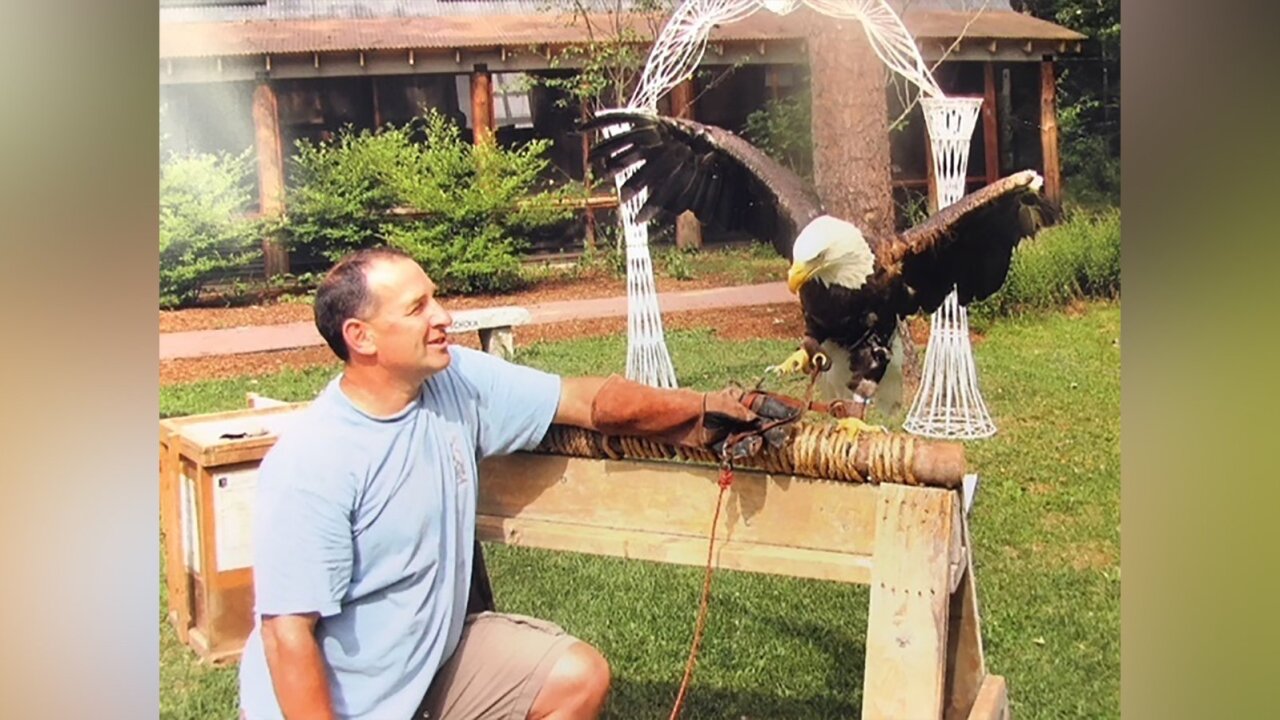 Robert Vallieres shows a bald eagle to a group in New Hampshire. The disabled Gulf War veteran has been tracking and rehabilitating birds for nearly 25 years.

Robert Vallieres hikes for miles, often three times a week, climbing to reach cliffs and quarries, just to get a glimpse of his beloved birds.

Robert Vallieres shows a bald eagle to a group in New Hampshire. The disabled Gulf War veteran has been tracking and rehabilitating birds for nearly 25 years.

It’s his joy and renewed purpose to track and rehabilitate the peregrine falcon and the bald eagle – two species nearly wiped out by the pesticide DDT in the 1960s.

It’s hard physical work for anyone, but especially a disabled Gulf War veteran who suffered a traumatic brain injury, aneurisms, chemical exposure, and PTSD that ended his military career and left him fighting for his life.

But Vallieres is a natural at it, because his military training is a perfect match.

The 57-year-old carries a heavy backpack filled with scopes, and binoculars plus a tripod.

“When I see an eagle soaring it’s like, ‘Wow!,” Vallieres tells CNN.

He’s been a volunteer for New Hampshire Audubon for some 25 years.

And today, in part thanks to him, the birds are making a comeback — a comeback that parallels his own.

As a young combat engineer, Vallieres was struck in the head on a mission in Kuwait to fortify a foxhole in 1990.

“A big beam came flying off of a truck and caught me in the temple area. I woke up in a medical hospital somewhere,” says Vallieres.

“A few days later, they sent me back to my unit and then I became really ill with an aneurysm on the verge of bursting in my heart.”

That took Vallieres out of the war and back home where he suffered a second aneurysm. For decades he’s lived in constant pain from migraines and scar tissue. He has a hard time breathing sometimes and a feeling of numbness partly due to artificial parts in his body. “Nobody wants numbness,” he says. “We want our senses.”

He was 28 years old and battled depression, anger, survivor’s guilt and cognitive issues from his head injury and PTSD.

“When you’re incapacitated and you really can’t move too much, you’re wondering if death is nearby.”

Despite his trauma, Vallieres still had to be a father to his little boy — a curious child who helped jump start his love for birds.

One day, his three-year-old son noticed a bird and asked his father what kind it was.

Vallieres bought a bird identification book and started learning along with his son. He bought some small binoculars and the two began observing birds together near their home in Concord, New Hampshire.

Then came another turning point. Vallieres saw an ad in the newspaper for a birding trip in New Hampshire’s White Mountains and signed up.

While most of the group was observing song birds, he saw something else: A falcon grab a bird in midair.

“All I saw were feathers all over the place. I stuck with it and saw (the falcon) took it to a snag and started eating it,” he says.

The drama of nature inspired him. He wanted to learn more about birds of prey; he loved how being outdoors made him feel.

“It uses all of our senses. Our sight, hearing, tasting, feeling,” Vallieres says.

“It gets you out in the fresh air — these things you take for granted sometimes if you get sick and stuck in a room.”

A purpose in life

As a veteran on disability, Vallieres couldn’t work. But he could volunteer.

At the time, in the mid-1990s, just when he needed a new purpose in life, New Hampshire Audubon was looking for volunteers to count and track peregrine falcons and bald eagles.

Vallieres built a nesting box for peregrin falcons in his yard in Concord, New Hampshire. Today he has a pair nesting there.

The species became endangered after the now-banned insecticide DDT, used heavily in the 1950s and 1960s, killed unhatched chicks.

A nationwide recovery effort bred young peregrine falcons in captivity which then needed to be released and tracked.

Vallieres stepped right up to monitor those birds as they grew up and bred, built nests and cared for their young.

“The basis of science is having data. Without somebody saying, ‘I saw these birds incubating. I know there’s eggs up there that should’ve hatched or failed to hatch,’ we couldn’t collect that information,” says New Hampshire Audubon Senior Biologist Chris Martin.

His military training was a plus.

Volunteers need to have lots of patience, keen observation skills and time — lots of time.

“People will give up on watching and lose their attention. Robert is able to hunker down in the woods and be okay. You can’t teach that skill easily,” says Martin, who’s Vallieres friend and long-time colleague.

You also have to be able to read the numbers off tiny bird leg bands through binoculars from 100 feet or more away. Vallieres has always been good at reading maps and navigating.

A change in outlook

It takes Vallieres a while to walk the miles on these birding trips — he does it slowly — due to his injuries. But he gets there. In the winter, he walks with snowshoes. Other times, he canoes across a lake to set his sights on a bird.

Vallieres says not only does his volunteering help with physical fitness, it helps his mental state tremendously.

“Finding rhythm or purpose in life besides myself,” says Vallieres, “Not to get stuck on myself, to have an outlet and be semi-physically fit.”

“He was struggling with focus at the time with what to do after his injuries,” says Martin. “This just turned a light on in his mind. It’s given him a concentration point.”

You can hear the positivity and sense of wonder in Vallieres’ voice when he talks about birding.

“I’d be out in nature and then all these animals kind of cross your path or you cross theirs. It’s taught me something.”

He’s even built a bird box to draw peregrine falcons, his favorite, to his own yard. It worked and now he has breeding pairs — thrilling both him and his son with the cycle of life.

Vallieres is also involved in rehabbing birds for a local wildlife hospital, Wings of Dawn.

He learned to train unreleasable birds as educational ambassadors — having them fly back and forth to a heavy glove on his arm.

“They’re stuck inside the cage. I would try to just keep them moving,” says Vallieres.

He sees the parallels with his early life and those of many injured veterans. “Don’t get stuck in the cage; get outside.”

A gift for others

Every month he takes an owl, an eagle, or some other bird of prey to the New Hampshire Veterans Home in Tilton.

He wants to give back to the veterans organizations that have helped him with his recovery through the years.

“He gets a huge crowd. There are always people that want to talk to him,” volunteer supervisor Patty Copeland tells CNN.

Robert Vallieres showing a peregrine falcon to boy at an Audubon camp.

Vallieres has had such an impact, the home applied for a grant and got dozens of binoculars for the veterans to observe birds on the property that includes woods and a pond. They even bought more bird feeders so the veterans who are less mobile can enjoy.

“He’s had discussions with residents about how the birding thing saved his life. Gave him a purpose.”

Vallieres even co-wrote a book, “Wounded Warriors: A Soldier’s Story of Healing through Birds.”

Vallieres still has bad days when the migraines are so painful “you just want to crawl under a rock. Leave me alone for a couple of days.”

And the scar tissue “just eats me up sometimes.”

But then he goes looking for an eagle’s nest — and his mood takes flight.

“It’s strange how bird shadow forces you to look up sometimes when you’re always looking down.”