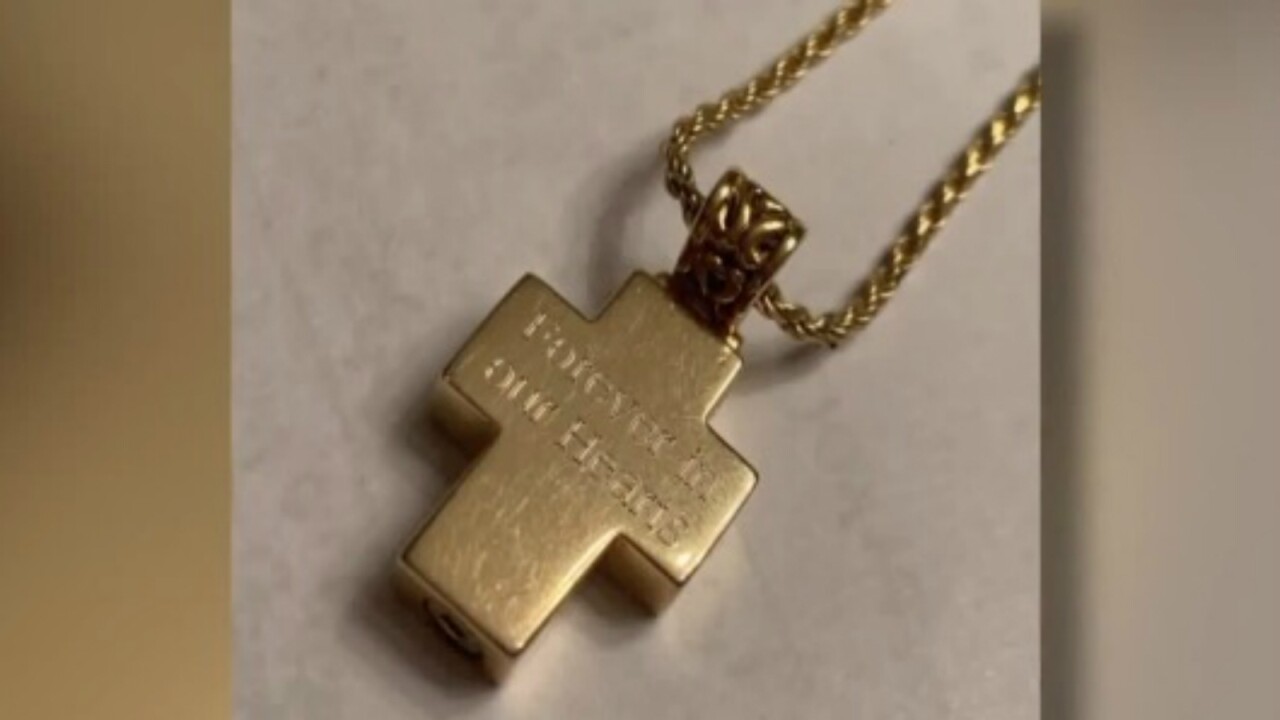 OCEANSIDE, Calif. - A California teen is breathing a sigh of relief after having a necklace with his late father's ashes returned to him by a Carlsbad family who found it in the sand.

It has been a rough few months for Isaiah Pasefika; in January, he lost his dad Thomas to cancer.

“It’s been hard. You can tell he’s not there [anymore].” Pasefika said.

After his passing, Pasefika and his nine siblings each received a cross necklace with their dad's ashes inside.

Pasefika said he rarely takes it off, but he did recently before getting into the water at an Oceanside beach. He thought he left the beach with it safely in his bag, but when he wanted to put it back on, to his horror, it was gone.

“It’s not a fun feeling,” Pasefika said. “I thought to myself, 'There’s no way. The sand’s going to cover it. It’s moving everywhere. Someone probably found it already.'"

Pasefika was right. Someone did find it almost a week later.

Eleven-year-old Abbie Cuthbertson was sifting around in the sand for shells when something shiny caught her eye.

“I picked it up and realized it was a necklace. I started looking around it and it said, 'In loving memory,' and I turned around and realized what it was,” Abbie Cuthbertson said.

Cuthbertson said she knew right away it was special and took it straight to her mother, Pamela.

“I also have one of those necklaces with my own parents' ashes in it and I just thought, if that was me who lost that, I would need someone to find it and get it back to me,” Pamela said.

After they got home, Pamela Cuthbertson shared a post on social media asking people to help her find the rightful owner.

“I woke up on Monday morning, and it had way over 600 shares just from my own page and I was like wow, that’s amazing," Pamela Cuthbertson said. "And then by 2 p.m. on Monday afternoon I got a private message from someone saying ‘Hey, I think I know who this belongs to.'"

Pasefika's sister confirmed the dates on the back of the cross.

“I was so excited. I was crying uncontrollably,” Cuthbertson said.

That all led to an emotional moment a couple days later when Pasefika met with the family that found his necklace. He said the second he placed it back around his neck, he felt his prayers had been answered.

“I know he’s watching over me right now smiling at this moment and he’s back home. He’s with me. I’m just so thankful,” Pasefika said.

The two families said this has bonded them for life, and they plan on getting together again in the near future.