Joe Biden announces he is running for president in 2020

After months of deliberation, former Vice President Joe Biden on Thursday announced his decision to run for president for a third time, answering one of the biggest outstanding questions about the makeup of the 2020 race.

The announcement came in a campaign video released Thursday morning.

Later today, Biden will attend a fundraiser in Philadelphia, Pa. On Monday, he will hold his first official event in Pittsburgh, Pa. followed by a swing through early voting states like Iowa, New Hampshire, and South Carolina in the coming weeks.

Biden, 76, enters the crowded Democratic primary field of 20 candidates as the presumptive front-runner sitting atop the most recent polls. But his more than four-decades-long career is set to undergo an unprecedented level of scrutiny as he seeks to win the Democratic nomination to take on President Donald Trump in a general election.

Biden, a centrist Democrat who often touts his relationships with those across the aisle, also will grapple with a Democratic Party that is increasingly feeling a pull from the left with a number of progressive candidates, like Sens. Bernie Sanders and Elizabeth Warren, in the 2020 race.

“I’m told I get criticized by the new left,” Biden said at an event in Delaware last month. “I have the most progressive record of anybody running for the United … anybody who would run.”

Trump has described a general election match-up against the former vice president as a “dream,” while some Republicans cast Biden, who has crafted a political brand aimed at appealing to working-class voters, as the most feared potential Democratic opponent for the President.

In recent weeks, Biden indicated he was close to mounting a 2020 campaign after gaining approval from his family to run for president for a third time. But he also acknowledged there were a number of other hurdles he still needed to work through, including fundraising, digital strategy, assembling a diverse campaign team and ensuring there is an appeal for a Biden run.

“I can die a happy man never having lived in the White House, but what I don’t want to do is take people’s time, effort and commitment without there being a clear shot that I could be the nominee,” Biden said in late February. “It is something that I have to make sure I could run a first-rate effort to do this and make clear where I think the country should go and how to get there.”

But it appears those concerns were assuaged. As they awaited a decision, Biden’s political team has worked quietly for months to lay the preliminary groundwork for a campaign, court donors and talk to potential staff.

Biden’s announcement comes in the wake of allegations he has made women feel uncomfortable in their encounters. The former vice president has maintained he does not believe he has acted inappropriately in his interactions with voters but said he’s willing to listen to women’s experiences and will be more “mindful about respecting personal space in the future.”

The debate over his interactions highlights the new reality for candidates running in a post #MeToo era. As he dealt with the fallout of the allegations, Biden’s aides said the issue would not dissuade him from entering the 2020 race, but his team is aware his contact with voters on the campaign trail could be scrutinized throughout a presidential campaign.

This will mark Biden’s third attempt for the White House after two failed bids in 1988 and 2008. His first presidential run was plagued by charges he plagiarized in law school and in campaign speeches. In 2008, he dropped out of the presidential contest after a poor showing in the Iowa caucuses, placing fifth with less than one percentage point.

Biden came close to making a late entrance into the 2016 campaign to challenge Hillary Clinton and Sanders in the Democratic primary, but ultimately decided against a run, in large part due to the emotional toll his son Beau’s death took on him and his family in 2015.

Biden has described himself as an “Obama-Biden Democrat,” a sign he would embrace the mantle of the Obama administration in a presidential campaign. The former vice president has led most early polls of potential Democratic contenders and has enjoyed high name identification and favorability ratings, which rose in the years since leaving public office.

The core values of this nation… our standing in the world… our very democracy…everything that has made America — America –is at stake. That’s why today I’m announcing my candidacy for President of the United States. #Joe2020 https://t.co/jzaQbyTEz3

Late last year, Biden declared himself the “most qualified person in the country to be president,” with his supporters pointing to his more than four decades of political experience as a boon for a possible campaign.

Throughout his career in Washington, Biden has embraced a blue-collar, middle-class message, delved into foreign policy debates and talked about the need to engage in bipartisanship. On the campaign trail last fall, he cast the election as a “battle for America’s soul,” a theme that will be central to his presidential campaign.

But his more than four decades in public service also carry some political baggage as several areas of his career are set to come under fresh scrutiny in a possible campaign — including his handling of Anita Hill during the confirmation hearings for Supreme Court Justice Clarence Thomas, his work related to the financial services industry — which has a base in his home state of Delaware — his past views on school busing and even his gaffes.

“I am a gaffe machine, but my God what a wonderful thing compared to a guy who can’t tell the truth,” Biden said in December. “I’m ready to litigate all those things. The question is, what kind of nation are we becoming? What are we going to do? Who are we?”

Biden tried to head off some of the expected criticism earlier this year, expressing regret for his handling of criminal justice issues — particularly the 1994 crime bill he helped authored, which critics argue led to an era of mass incarceration.

Biden has also repeatedly expressed regret for his handling of Hill’s testimony at the Thomas hearings, though critics say he could have done more in his role as chairman of the Senate Judiciary Committee at the time.

“To this day, I regret I couldn’t come up with a way to get her the kind of hearing she deserved, given the courage she showed by reaching out to us,” Biden said at an event in New York last month. 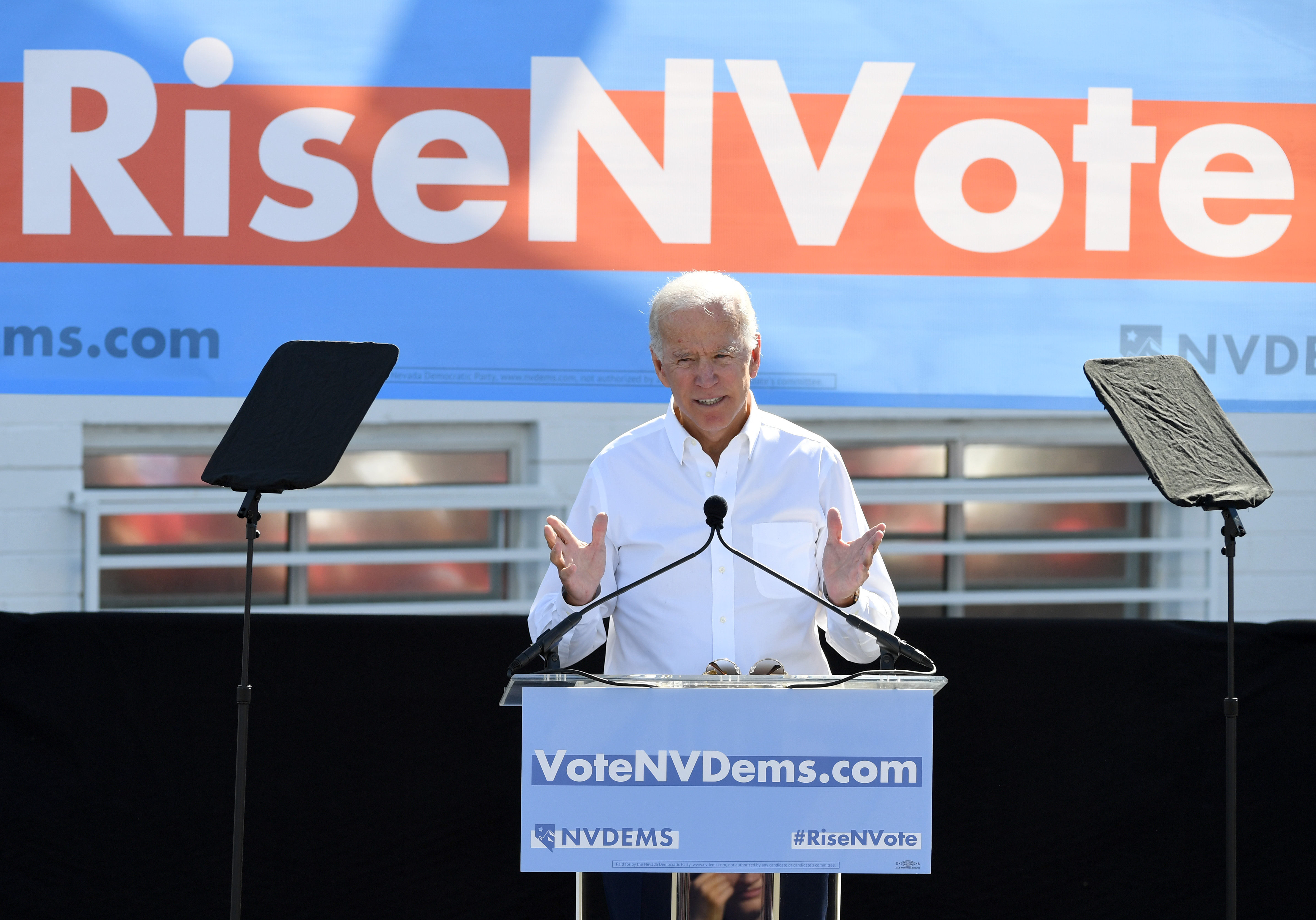 In recent months, Biden defended his work with Republicans as he came under fire for praising a GOP congressman from Michigan during a paid speech weeks before the midterm elections.

But he’s also been confronted by the realities of the current political environment. In a speech in Omaha, Nebraska, this year, Biden called current Vice President Mike Pence a “decent guy,” a comment that drew furor from the left due to Pence’s stance on LGBTQ rights. After he was called out by actress and activist Cynthia Nixon, Biden quickly walked back his comments on Twitter, writing, “there is nothing decent about being anti-LGBTQ rights, and that includes the Vice President.”

Biden will be among the oldest candidates in the Democratic primary field, and he has acknowledged his age would be a “legitimate issue” for voters and opponents to raise.

Born in Scranton, Pennsylvania, in 1942, Biden, who overcame a stutter as a child, often touts his upbringing in Pennsylvania and Delaware as emblematic of the concerns of working-class families.

At the age of 29, Biden was elected to represent Delaware in the US Senate. where he served for 36 years. During that time, he sat on the Senate Judiciary and Foreign Relations committees, including stints as chair on each of them. Among his proudest legislative accomplishments — authoring the Violence Against Women Act.

Just before leaving office in 2017, Obama surprised Biden by awarding him the Presidential Medal of Freedom, the nation’s highest civilian honor.

“To know Joe Biden is to know love without pretense, service without self-regard, and to live life fully,” Obama said at the time.

Weeks after he was elected to the Senate at the age of 29, Biden’s wife Neilia and 13-month-old daughter Naomi were killed in a car accident, which also seriously injured his young sons Beau and Hunter. Biden was later sworn into the Senate at his son Beau’s bedside. Several years later, Biden married Jill Jacobs, and the two had a daughter, Ashley.

Tragedy struck the Biden family a second time in 2015 when Beau, the attorney general of Delaware and an Iraq War veteran, passed away after a battle with brain cancer — a time the former vice president recounted in his memoir, “Promise Me, Dad.”

Since leaving the White House, Biden has built a network of initiatives, including his American Possibilities PAC, the Penn Biden Center for Diplomacy & Global Engagement, the Biden Institute at the University of Delaware, the Biden Foundation and the Biden Cancer Initiative. The Biden Foundations was planning to suspend operations once Biden announced his presidential campaign.

Biden also served as one of the most high-profile Democratic surrogates during the 2018 midterm elections, previewing arguments for a possible presidential campaign at campaign rallies across the country.