Archaeologists working near the pyramids of Giza have discovered an ancient Egyptian burial ground dating back to around 2500 BCE and hosting the tombs of high-ranking officials.

The remarkable find includes a limestone family tomb from Egypt’s fifth dynasty, a period spanning the 25th to the 24th century BCE, the country’s Ministry of Antiquities said while unveiling the site.

The tomb contains the mummies of two people: Behnui-Ka, who held seven titles during the period, including priest and judge; and Nwi, also known as the “chief of the great state” and the “purifier” of the pharaoh Khafre.

Khafre, who built the second of the three famous pyramids of Giza, is believed to have reigned for around 25 years. 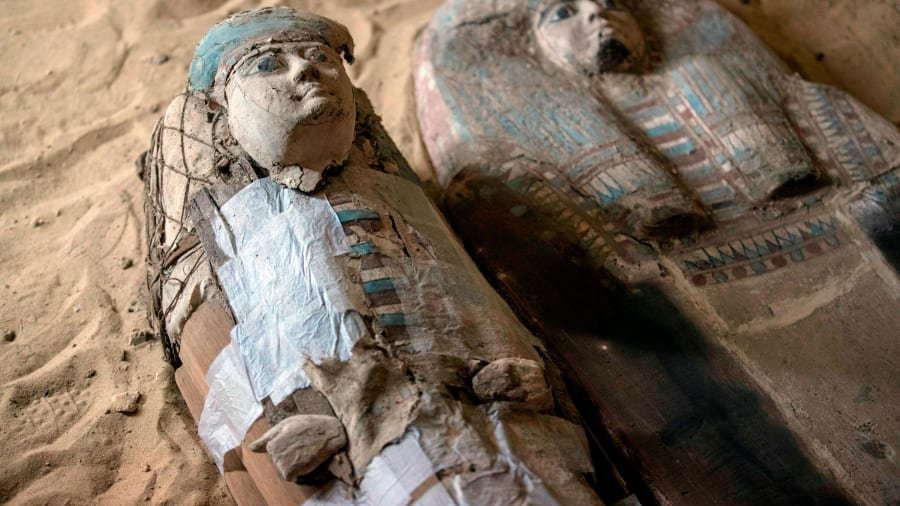 Related: Archaeologists unearth village in Egypt older than the pharaohs

Archaeologists also found various artifacts elsewhere in the tomb, officials said, including a limestone statue of one of the men, his wife and their son.

Other parts of the burial site were used more extensively from around the seventh century BCE, they added.

A number of wooden coffins dating back to that era were found, with several featuring bright colors and elaborate decorations.

Some of the coffins also featured hieroglyphics on their lids and were found close to fragments from wooden masks.

The ministry is hopeful the new discoveries will help boost tourism to Giza, which was hit by the turmoil that followed the 2011 Arab Spring and has been slow to recover.

Giza’s long-awaited Grand Egyptian Museum has been built with this aim. Expected to open in mid-2020, the $1 billion museum will rehouse and restore some of the country’s most precious relics.