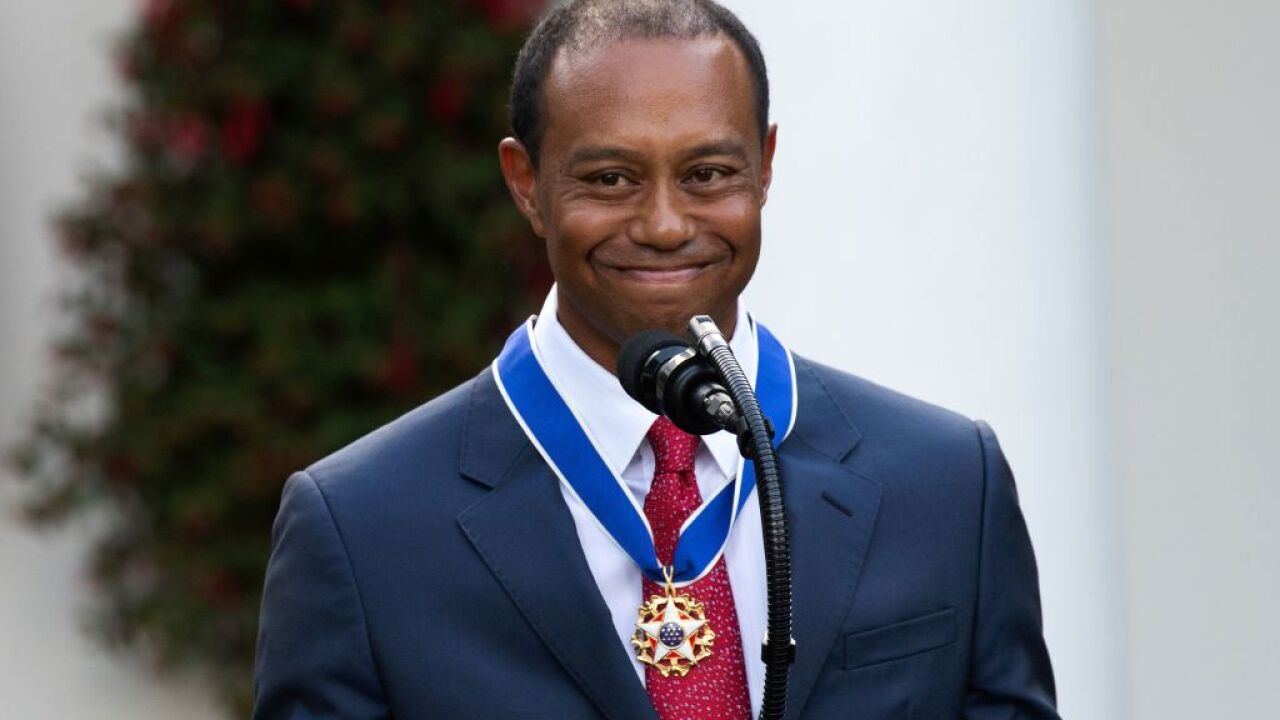 US golfer Tiger Woods smiles from the presidential lectern after US President Donald Trump presented him with the Presidential Medal of Freedom during a ceremony in the Rose Garden of the White House in Washington, DC, on May 6, 2019. (Photo by SAUL LOEB / AFP) (Photo credit should read SAUL LOEB/AFP/Getty Images)

The duo shares a love of the game of golf, but both have also risen to unpredictable and spectacular comebacks: Trump from bankruptcy to the presidency; Woods from public shaming following multiple affairs, injuries and a resulting painkiller addiction, to winning this year’s Masters.

Trump recalled Woods’ historic career from 1997 to his 2019 Masters win, including his injuries and miraculous comeback.

When the President discussed the 2019 Masters win, he also noted that Woods’ run broke television records that day as well.

“Congratulations again on your amazing comeback and your amazing life and for giving sports fans everywhere a lifetime of memories,” Trump said.

Woods received a standing ovation upon the beginning of his remarks.

“This has been an unbelievable experience,” Woods said, thanking his family, including his late father.

The Medal of Freedom recognizes individuals who have made “an especially meritorious contribution to the security or national interests of the United States, world peace, cultural or other significant public or private endeavors,” according to the executive order designating the award. Since taking office, Trump has presented the award to numerous athletes, including Alan Page, Roger Staubach, and a posthumous award to Babe Ruth.

Trump, who has a long history with Woods, said in a tweet after the Masters that he had congratulated the golfer on the win and his comeback, announcing that he would be giving him the award.

“Spoke to @TigerWoods to congratulate him on the great victory he had in yesterday’s @TheMasters, & to inform him that because of his incredible Success & Comeback in Sports (Golf) and, more importantly, LIFE, I will be presenting him with the PRESIDENTIAL MEDAL OF FREEDOM!” the tweet said.

Woods’ career slumped following his divorce and surrounding scandal in late 2009 and early 2010. He lost about $20 million from estimated endorsements after sponsors including Gatorade, AT&T, and Accenture cut ties. After a string of losses in 2011, Woods failed to make the World Golf Ranking’s top 50 players list. But one fan who stuck with him: Donald Trump, who supported the embattled golfer in March 2013 via Twitter.

“I remained strong for @TigerWoods during his difficult period. He rewarded me (and himself) by winning at Trump National Doral,” Trump wrote.

While it’s entirely up to the President’s discretion as to who receives the Medal of Freedom, the choice of Woods, who at 43 is still relatively young compared to other recipients, has raised eyebrows for Trump’s business ties to the pro golfer.

Trump, an avid golfer, owns courses across the world and frequently hits the links, playing most recently this Saturday at the Trump National Golf Club in Sterling, Virginia. His Trump National Doral in Miami has a villa named for Woods. According to The New York Times, Woods celebrated his first Masters win in 1997 at Trump’s Taj Mahal casino in Atlantic City, New Jersey.

And, per the Times, Woods is designing a course in Dubai that would be managed by the Trump Organization. Though it was expected to be completed by the end of 2017, it has yet to open, and a spokesman for Woods declined to comment to the Times.

The President has played multiple rounds with Woods, including alongside Jack Nicklaus in February at Trump National Golf Club in Jupiter, Florida.

Trump has been known to cheat on the golf course, including, reportedly, during previous games with Woods. But Rush Limbaugh, who recently played with the President, says it’s all in good fun.

“He picks whoever’s playing the best and puts himself on their team, and it may — he may change teams two or three times in a round. It’s just fun,” he told Fox News, adding, “It’s a faux competition but it’s just fun. If somebody hits a bad shot, he just tells them, ‘Drop another ball, we’re out here having fun.’ There’s no stress in it.”

For his part, Woods defended his friendly relationship with the President, saying he respects the office.